The new possibilities created by genetics have brought with them new questions about what is right.

An example: genetic testing is, for now, optional. But many medical tests that start out as optional become less and less optional as time goes by. Who should decide when genetic tests are done? Should insurance companies or employers have access to the results?

If prenatal genetic tests become more common, will people with certain genetic traits, diseases, or even predispositions suffer increased discrimination? Will "designer babies" become the norm? For some, the opportunities presented by genetic testing and therapies smack of eugenics, the use of selective breeding to create "superior" people.

More broadly, who "owns" the genetic information-or the life forms-that come from research? These questions arise with increasing frequency in industry, where patents are granted for genetically engineered plants and animals, and for genetic sequences.

Companies argue that without patents, they are left with no guarantee that they can recoup their investment when they discover key genes. But do patents stifle progress and the free exchange of ideas, so important in science?

Others worry that reckless experimenting will have unforeseen, potentially catastrophic consequences. For example, the prospect of transplanting animal organs into people (xenotransplantation) raises concern that new diseases could jump from animals to humans, as SARS and "mad cow" disease have.

As for gene therapy, some wonder if it's right to tinker with human DNA. Currently, treatments are focused on somatic cells, that is, cells in the body. Any alterations are not passed on to later generations, because DNA in the germ cells-eggs and sperm-is unaffected. But so-called germ line gene therapy is certainly possible. It could cure diseases before they happened, but might cause other unexpected problems that would persist in later generations.

The genetic modification of plants for food is a hot-button issue around the world. Genes transplanted to corn, potato, soybean and other food strains can confer desired traits, such as resistance to pests, which lessens the need for toxic pesticides. Though genetically modified foods are thought to be safe to eat, their impact on the environment may not be fully known.

A strain of mice used for cancer research, called Oncomouse, was the first mammal to be patented! 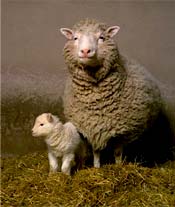 This cloned sheep, Dolly, foretells the prospect of human cloning, one of many reproductive possibilities under debate.