Have you ever had your genes tested? Probably not. DNA testing is still pretty limited, although it is becoming more and more common, especially for fetuses and newborns.

Many prospective parents, especially those with a history of genetic disease in the family, seek genetic testing and counseling before having children. Genetic counselors can evaluate genetic tests and advise people of the risk of conceiving a child with recessive, inherited diseases like sickle cell anemia, Tay-Sachs disease, or cystic fibrosis.

Genetic tests can be performed on fetuses by taking cell samples from the womb. The two techniques available are called amniocentesis and chorionic villi sampling. Down syndrome, a condition caused by having an extra chromosome, is tested for this way. After birth, most newborns are given a blood test for phenylketonuria, a genetic disease that can cause mental retardation if it goes undiagnosed.

Not all genetic testing is focused on children. Testing is also done to match organ donors and recipients, to establish paternity or maternity, and in forensics, for identifying evidence from crime scenes. Testing can also help diagnose adult-onset inherited diseases, such as Huntington's disease.

Genetic tests are now available for a range of cancers. These tests don't test for cancer directly, but instead indicate an increased likelihood of developing a cancer. Likelihood is far from certainty, and cancer may or may not develop, since it must be triggered by additional mutations.

Meanwhile, many cancers develop in persons without so-called "cancer genes." For example, the two gene variants that have been linked with breast cancer, called BRCA1 and BRCA2, are involved in only 5% of breast cancer cases.

The decision to be tested can be loaded. What if a gene test told you that age 40 or so, you would start to lose control of your muscles and live a shorter lifespan? This is the case in Huntington's disease, which has no cure. Perhaps you would rather not know, but the information might also guide your life decisions, such as when or whether to have children.

Biochips, also called DNA arrays or microarrays, are a new technology that promises to speed and simplify a wide range of genetic tests.

Each small glass slide or "chip" contains rows and rows of DNA probes, which test for the presence of a specific DNA sequence or mutation. If the mutation or sequence is present in the DNA being tested, a specific spot on the biochip will glow under special light. A biochip can test for thousands of mutations at once.

Biochips could be the first step towards genetic ID cards. Imagine something like a credit card, except this card would carry all of your genetic information. Your doctors could use this DNA data to tailor your medical care and choose the right drugs and dosages.

Some of the diseases for which genetic tests are currently available: 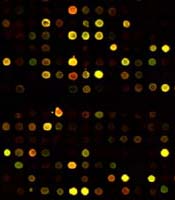