Now, these and other medicines can be made by specially-modified bacteria, called transgenic bacteria. These single-celled organisms have foreign genes along side their own DNA. They live and reproduce like ordinary bacteria, but they also do a bit of extra duty, and produce human proteins for medicines and vaccines.

Farm animals have also been put to work making drugs for humans. It's called gene pharming. For example, antithrombin III, which prevents blood clotting during surgery, is secreted in the milk of transgenic goats. To create these transgenic goats, scientists used a needle thinner than a human hair to inject the DNA sequence for antithrombin III into goat eggs. Then they transplanted the fertilized transgenic eggs into female goats.

Scientists also hope to use genetic technologies to make "magic bullets," drugs that are designed to target specific antigens (disease-causing substances) while leaving healthy tissue alone. "Magic bullets" would have few side effects, because they would consist of antibodies, the same kind of specific weapons that our own immune systems use to kill invaders like viruses, bacteria, or even cancer.

Along with bacteria and farm animals, plants are being genetically engineered to make human hormones, antibodies, and blood-clotting factors. Bananas are being engineered to deliver vaccines.

To make a transgenic plant, scientists mix foreign DNA with protoplasts, plant cells that have had their tough cell walls removed. Then, they run a small electric current through the mixture. The current makes tiny holes in the cell, allowing the foreign DNA to enter. Once the protoplast develops into a plant, the medicine it has been tricked into making can be extracted from the plant's seeds. 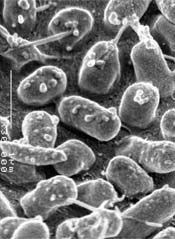 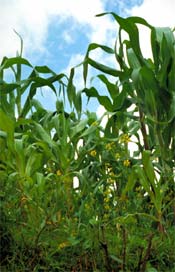