Many of the worst diseases around are caused by glitches in our genes, and the therapies for these diseases often involve a lifetime of drugs (and their nasty side effects) that help but don't really solve the problem. Wouldn't it be great if doctors could just "fix" this faulty DNA?

That is the goal of gene therapy, the insertion of genes into human cells to treat a disorder. It's harder than it sounds. Getting the genes into the right cells, getting them to stay there, and getting them to "express," that is, do their jobs-all present major challenges. Still, there have been some gene therapy successes, and researchers hope for more in the future. So far, gene therapy on blood cells has been most successful, because blood can be easily removed and returned to the body-not so with hearts and livers.

For example, gene therapy has helped children a rare immune disease called SCID, caused when a faulty gene fails to make a necessary enzyme. Doctors remove some blood cells and use a virus to "infect" the cells with good copies of the faulty gene. Then these blood cells are returned to the body, where they start making the missing enzyme.

The blood cells used in this and other gene therapy trials were stem cells. Stem cells are undifferentiated cells, cells that can grow into other types of cell in the body. Stem cells are extremely interesting to genetic researchers, because it's possible to use them to grow tissues and organs "ex vivo" (outside of the body), as well as to provide cures by injecting genetically-tailored stem cells directly into the body ("in vivo").

Genetic technologies promise many new forms of treatment. Thanks to information provided by the Human Genome Project, a recently-completed effort to identify the entire sequence of human DNA, researchers are envisioning new cures and treatments for a growing list of diseases, including diabetes, heart disease, cancer, AIDS, and Parkinson's. Often, knowing the genetic cause of a disease can help point researchers towards a cure.

Human stem cells are useful in gene therapy research and treatments-no debate there. Yet there is debate about one of the common sources for stem cells: unwanted human embryos from fertility clinics.

It is possible to do stem cell research using stem cells from other sources, including cord blood (found in placentas and umbilical cords), bone marrow, tooth pulp, and even in the tissue sucked out during liposuction.

Donated human organs like hearts, livers, and lungs are in short supply. Could pig organs be put into people?

Ordinarily, your body would reject a pig organ faster than you can say "bacon." But researchers hope to be able "humanize" pigs for organ donation by adding human genes to their DNA. As bizarre as this idea may sound, researches have already used this technique to transplant genetically altered pig organs into monkeys. 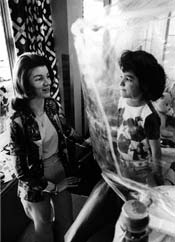 David Vetter, also known as "the boy in the bubble," died in 1984 at age 12 with a rare immune disease, called SCID. Today, this disease has be treated-with mixed success-using gene therapy.