What is a Gene?

Look closely at the chromosomes and you'd see that each is made of bundles of looping coils. If you unraveled these coils, you'd have a six-foot long double strand of deoxyribonucleic acid-DNA.

A DNA molecule is a twisted ladder-like stack of building blocks called nucleotides. There are four types of DNA nucleotides-adenine, cytosine, guanine, and thymine-or A, C, G, and T, for short.
If you could peer into any one of your body's 50 trillion cells, you'd find a fantastically complex and busy world. At the center of this world you'd find a nucleus containing 46 molecules called chromosomes-23 from your mother and 23 from your father. These chromosomes are basically an instruction set for the construction and maintenance of... you.
These two long stacks of building blocks fit together like two sides of zipper, but there's a rule involved: adenine only pairs with thymine, and cytosine only pairs with guanine. So each rung in the DNA ladder is a pair of nucleotides, and each pair is either an A stuck to a T or a C stuck to a G.
You've got six billion of these pairs of nucleotides in each of your cells, and amongst these six billion nucleotide pairs are roughly 23,000 genes. A gene is a distinct stretch of DNA that determines something about who you are. (More on that later.) Genes vary in size, from just a few thousand pairs of nucleotides (or "base pairs") to over two million base pairs.

Figuring out the structure of DNA was a major challenge for scientists working in the mid-20th century. DNA is tiny, just two nanometers across, 2000 times thinner than a human hair. That's too small to see clearly with even the best light microscope.
An x-ray diffraction pattern helped solved the mystery. British chemist Rosalind Franklin made this image by shooting a beam of x-rays at a DNA sample, then capturing on film a record of how the x-rays were bent, or diffracted (see image at right).
Biophysicists James Watson and Francis Crick analyzed the picture and concluded that it must have been made by a double-stranded helix, the now-familiar twisted ladder shape of DNA. They announced their results in 1953, and later won the Nobel Prize.

DNA is a twisted double strand of nucleotides and a phosphate backbone. 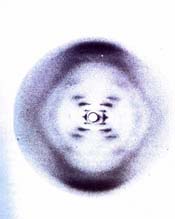 An x-ray diffraction pattern of DNA