Believe it or not, in this case having a blood type different from either parent is by far the most common result. In most cases, an O parent and an AB parent will have only A or B kids.

It is only very rarely that they might have an AB or an O child (see the links at the end for these exceptions). Isn’t genetics fun!

What I’ll do for the rest of this answer is go through why an O parent and an AB parent will have only A or B kids. As you’ll see it has to do with one gene, two copies, three versions, and four blood types.

(I have reposted a table at the end of this answer that I put up a few years back. It gives all the possible blood types of two parents and the most likely blood types for their children.)

As humans, we all have the same basic set of genes. What makes you different from me is that we have different versions of some of our genes.

The ABO gene comes in three versions: A, B, and O.

So there is the single ABO gene that we have two copies of. And that single gene comes in three different versions. This means there are six possible combinations that anyone can have. Here they are: 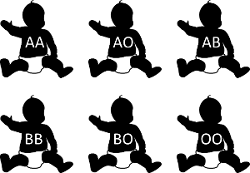 These six combinations lead to the four different blood types like this: 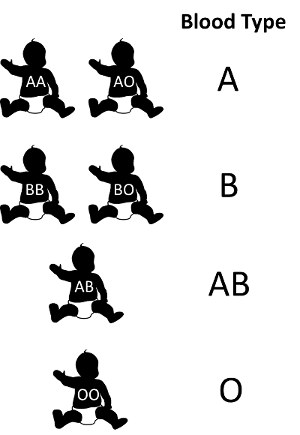 Now let’s see how you ended up with A and B children.

From the previous section we can see that you have an A and a B and that your partner has two O’s. Maybe something like this: 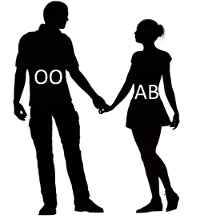 (I made the mom AB and the dad OO here but it works the other way too.)

Remember, you only get to pass down one copy to your child. Your partner can only pass an O while you can pass an A or a B. Here are the two possibilities: 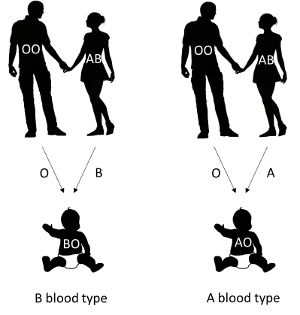 As an aside, each child has a 50% chance of getting an A from you and a 50% chance for getting a B. Which one you pass down is selected at random.

So that’s why your kids have a different blood type from you and your partner. And why it takes a pretty special situation to end up with an AB or an O child.

Here is that table I promised of each possible combination of parental blood types and the predicted blood types of their children: 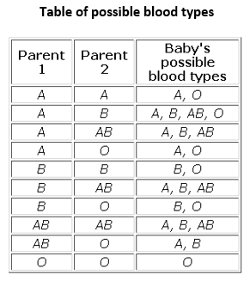