My mother's twin sister had ALS, my mother didn't. Their mother's sister may also have had ALS. Should I be concerned that I may have inherited the possibility of getting the disease?

- A curious adult from Massachusetts

The short answer is that it is possible that you (and your family) have a higher risk for developing ALS compared to the average person. But you also might not.

It depends on a number of factors. This includes whether or not your grandmother’s sister really did have ALS, how old your relatives were when they started having symptoms, and other details about your family history. (This is why you should always talk to your doctor for detailed medical advice!)

What is ALS?
Amyotrophic lateral sclerosis (ALS) is a neurodegenerative disease. In ALS, the nerves that control your muscles degenerate, or stop working correctly. This leads to muscle weakness.

The lifetime risk for ALS is 1 in 400. If you had 400 people in a room, it’s likely that one of them would develop ALS during their life.

Most of the time, ALS is a sporadic disease. This means it happens by random chance and doesn’t run in a family. In fact, around 90% of people who have ALS are the only person in their family who have the disease!

Anyone can develop ALS, and most of the time we aren’t concerned that their family members have an increased risk.

However, there are also families where multiple members do have ALS. We call these cases familial ALS. This is more likely when: 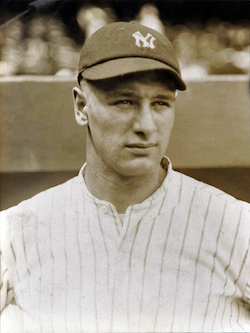 ALS is sometimes called "Lou Gehrig's Disease", after the baseball player whose illness brought international attention to the disease.
Image from Wikimedia Commons

There are two main genes to think about in familial ALS: C9orf7 and SOD1. Some families have mutations in other genes, but these two are the most common culprits.

These two genes both make proteins in your neurons. And if these genes are mutated, the proteins they make can be very sticky. These sticky proteins can clump together and form protein aggregates.

Scientists still aren’t exactly sure why protein aggregates cause ALS. Or even that the aggregates do cause ALS, and aren’t just another symptom.

People with mutations in these genes have a higher chance for developing ALS…but they are NOT guaranteed to end up with the condition. Around 10% of people with these mutations don’t ever develop the disease.

A positive genetic test is not a diagnosis and cannot predict when (or if!) someone will develop ALS.

Even if you have a relative who has a mutation in one of these genes, you may not inherit ALS. This is because familial ALS is usually passed down in an autosomal dominant pattern. This means that just one mutated version of the gene can be enough to cause the disease.

We typically have two copies of each gene, one from mom and one from dad. This is true for the familial ALS genes as well!

So in your case, it matters what your mom inherited. Even if your aunt had a genetic change that increased her risk for familial ALS, your mom might not have inherited that same mutation. That would make your risk the same as someone who doesn’t have a family history of ALS.

Diagnosing familial ALS can be challenging
It’s possible to find genetic changes and identify some people who are at risk for developing familial ALS. But there are a couple things that make it more difficult to say whether or not someone could have familial ALS.

First, even though we know a few genes linked with familial ALS, there are more genes waiting to be discovered! We can find a genetic cause for around 60-70% of people who have familial ALS, but there are still families where we haven’t identified a mutation. That means that we aren’t able to test other family members or know who else in the family is at risk.

Second, the first family member to have genetic testing should be someone already diagnosed with ALS. If we find a genetic change in a familial ALS gene, we know what to look for when we test other people in the family.

But if we tested someone who doesn’t have the condition without knowing what to look for, the results aren’t as clear. For example, imagine an unaffected person has genetic testing that doesn’t find a mutation. Either:

So we can’t tell this person whether or not they are at risk for familial ALS! Genetic testing would be uninformative for them.

For your family specifically, it’s difficult to say if you should be concerned about an increased risk of ALS. The best way to get more information about your risk is to speak to a genetic counselor or a neurologist who has experience with familial ALS. 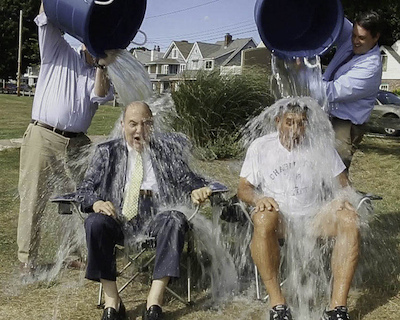 The Ice Bucket Challenge has raised more than $220 million for the ALS Association.
Image from Flickr

There are many possible causes for sporadic ALS
There are some genetic changes that only slightly increase chances for ALS
ALS research is ongoing!