If a superior alien race visited Earth making a David Attenborough-like nature documentary, would their scientists consider all Homo sapiens the same, or would the different races be categorized under different Homo sapien subspecies? My question is, are all human beings technically the same exact species of Homo sapiens despite our physical differences?

— A curious undergraduate student from California

The short answer: yes! I can’t speak for the alien documentarians you have proposed. However, biologists here on earth certainly agree that modern humans are all Homo sapiens. There’s no need for any subspecies designation.

Our physical differences are actually really superficial in terms of genetics. We humans share 99.9% of our DNA with each other! This makes us far too similar to one another to be considered different subspecies.

While other organisms might have subspecies that look fairly similar, they are usually pretty genetically distinct from each other. For example, some chimp subspecies are more genetically diverse than all living Homo sapiens!

To really drive this point home, there are even scientists who think Neanderthals were a H. sapiens subspecies. After all, modern humans and Neanderthals interbred. For this to occur, we must be pretty closely related!

Neanderthals look pretty different from us and are fairly genetically distinct. If even they could be considered members of our species, your alien documentary would certainly group all living humans together.

Of course this all depends on how we define species and subspecies. So how do scientists decide what categories to put living things into?

What is a species?

This is a question that biologists have struggled with for a long time. In part because the idea of “species” is a concept entirely made up by humans!

As you can imagine, life is really complicated and ever-changing. This makes it really hard to apply rigid labels to living things. But people have always loved putting things into boxes. Even when they don’t quite fit.

You might think that it is easy to tell the difference between species just by the way that they look. But appearances aren’t everything!

For example, the western and eastern meadowlark look identical to each other—but they have very different mating calls. Because of this they never interbreed, even in places where both species exist together.

So, should we consider these animals to be the same? See, it’s not as easy as it looks! 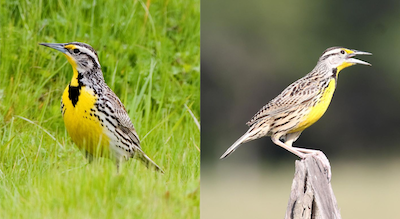 A commonly used definition of species is the biological species concept. This defines species as:

Let’s go back to the meadowlarks. Because they have different songs they don’t have the potential to interbreed! That makes the eastern and western meadowlarks different species.

But while this definition generally works, there are many exceptions.

First, this definition only works for animals which reproduce sexually. Asexual organisms (like bacteria) can’t be defined by this method.

Also, members of two different species are sometimes able to produce offspring together. These offspring are called hybrids.

While hybrids are sometimes less “fit” than their parents, other times they do really well and produce their own offspring! Plants, in particular, successfully hybridize all the time.

Other cases that complicate the rules are ring species. Take a look at these salamander subspecies: 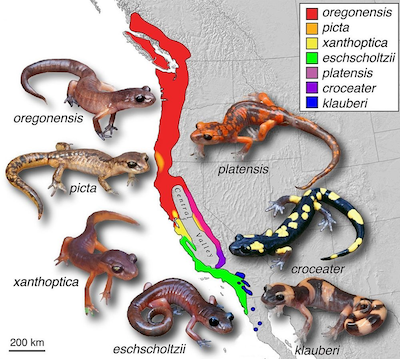 These salamanders are all closely related, and live along the west coast of North America. Each subspecies can successfully breed with its nearest neighbor.

But notice how they loop back around the Central Valley area? The two populations at the southern end of this loop can't breed with each other. It’s like a game of telephone where the message changes only slightly with each person, but at the end the original message is unrecognizable.

Should we consider these salamanders to all be within the same species, even though not all of them can interbreed? Where do we draw the line this gradient?

Defining species in the fossil record

Now that I’ve confused you enough, let’s think about an alien race trying to classify us. This is actually kind of similar to us trying to look back into the fossil record at things like dinosaurs. We would certainly be aliens to them!

Despite what Jurassic Park would have you believe, paleontologists usually don’t have the luxury of genetic information to guide them. Most fossils are just too old to preserve DNA! Paleontologists have to use bones to classify extinct animals.

To do this, they compare the fossil bones to animals that have already been classified. This is a pretty tricky task, especially when they don’t have a complete skeleton! New species are often defined based on tiny differences —which are sometimes contested by other paleontologists.

It’s also tricky because we know some non-extinct species have a ton of variation, even in their bone structure. For example, corgis and great danes are pretty different, even though they’re just different breeds of Canis familiaris. But if we only knew about them from fossils, we probably would call them different species!

We also know there can be physical differences between sexes, or between juveniles and adults. Scientists recently realized that 3 fossils that had been classified as completely different dinosaur species (Dracorex hogwartsia, Stygimoloch spinifer, and Pachycephalosaurus wyomingensis) are probably the juvenile, subadult, and adult forms of the same species! 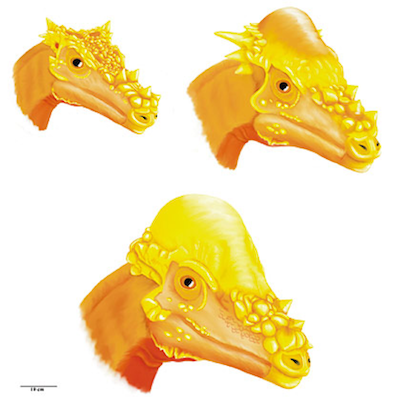 It turns out ”species” is a nebulous, human-defined concept. Life is interesting, complicated, and sometimes defies classification!