Are chimeras at an increased risk for any diseases? I’ve heard there is a link to autism.

Before we dive in, it’s important to remember the distinction between association and causation. There have been associations between chimeric status and specific conditions. Autism is not among these conditions.

However, it has not been proven that chimerism causes these conditions.

Twin chimerism arises from cases of “vanishing twin”. This can happen within a twin pregnancy, if one embryo dies in utero and is absorbed by the surviving embryo. The surviving fetus then has two sets of DNA: its own DNA, and DNA from its twin.

One study showed that the “vanishing twin” phenomenon is associated with an increased risk of congenital birth defects in the surviving fetus.1 This suggests that a lost twin may be a factor for the health of the surviving twin.

Studies of disease in twin chimerism are continuously ongoing. Confirmed cases of twin chimerism are very rare, with only 100 identified worldwide. So right now, not much is known about the health effects (if any) in this type of chimera.

At this point, disease has mostly been implicated in another type of chimerism: microchimerism.

Mothers are a tiny bit chimeric! Occasionally, a few cells from a fetus may stick around even after the baby is born. This means that mothers may have a secondary set of DNA in their bodies! 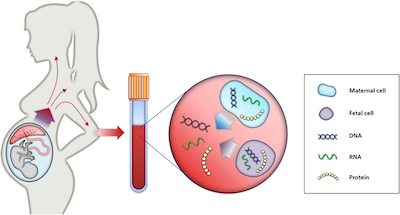 Women who were pregnant may have a small amount of DNA from their baby.
Source: Pos et. al 2

When this secondary DNA is introduced, the body sometimes recognizes it as a foreign substance and attempts to get rid of it.3

One study looked at women who had sons versus women who did not have sons. This is one of the easier types of microchimerism to detect, since normally women do not have male cells!

They found that mothers with microchimerism were more likely than non-mothers to have system sclerosis, a chronic condition that involves hardening and tightening of the skin.4 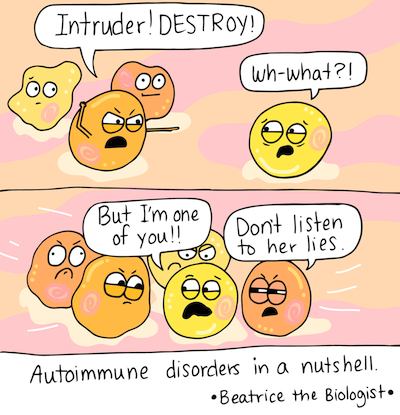 Courtesy of Beatrice the Biologist

But microchimerism does not always increase risk for disease. Sometimes it’s even beneficial!

In fact, it’s well known that multiple pregnancies actually provides a protective factor against breast cancer.5 This may be due to multiple opportunities for microchimerism to occur, but the exact reason for this is not yet known.

This theory is supported by some other research. One study found that there were higher concentrations of fetal DNA near thyroid tumors than expected.6 This suggests that fetal cells may be recruited by the body to assist in repairing tumor sites.

But what about autism?

No associations between autism and microchimerism have been studied. Autism is a very confusing condition as not that much is known about it! What we do know is that both genetics and environment play a role. (Read more about autism here.)

Clearly, microchimerism affects different organ systems, so who is to say that the brain is off limits? More studies would need to be done in this area to see if neurological conditions (like autism) are related to chimerism.

The landscape of chimerism is just beginning to unfold. Many associations have been made between chimeric status and conditions such as autoimmune diseases and cancer. This alone can help scientists to continue to make breakthroughs in medicine and provide insight into future treatments!