I'm a crop and soil sciences graduate, and I'm studying different pests. Several insects, including Soybean Aphid and Alfalfa Snout Beetle, reproduce by a process called parthenogenesis. This process allows the Alfalfa Snout Beetle to all exist as females. How does parthenogenesis offer the opportunity to develop resistance to pesticide applications, then pass the traits with stability to their offspring?

- An undergraduate student from Michigan

Parthenogenesis—what a mouthful! This is a rare form of reproduction that involves an animal cloning itself. Specifically, a female clones herself to make identical daughters.

Parthenogenesis is a form of asexual reproduction. Soybean aphids and alfalfa snout beetles are common pests in the U.S. that can do this.

But soybean aphids aren’t entirely female. There are also male aphids, and this species does sometimes reproduce sexually. The soybean aphid has a complex life cycle that takes the best of both sexual and asexual reproduction!1 There’s less information on the alfalfa snout beetle, but it may also have a sexual form.2

There are many insects who reproduce purely asexually though, which seem to do just fine.

Let’s look at the pros and cons of sexual vs asexual reproduction, and how the soybean aphid might benefit from doing both.

Parthenogenesis is basically the quick and easy way for animals to reproduce. No need to find a suitable mate! It’s much faster to just clone yourself.

Of course, all the daughters will be the same as their mother. If the mother is really well suited to her environment, this can be great!

Let’s imagine that there is a soybean aphid that gets a random mutation that makes her resistant to pesticide. She has an advantage over her rival aphids. In this case, if she could just clone itself without needing to mate, her daughters could quickly spread and outcompete the other aphids.

Just how common is it to get a random useful mutation? Is this scenario even likely? You may remember that beneficial mutations are pretty rare.

It turns out there are a lot of aphids – as many as thousands on just one plant!3 Now think about how many might be in a field of plants… With that many bugs, there are pretty good odds that a few will get lucky. 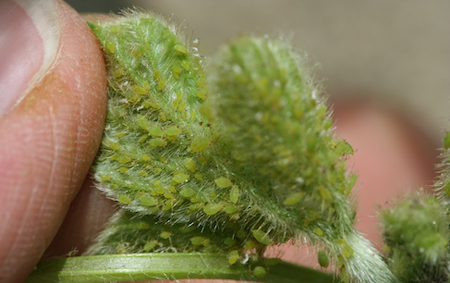 There are a lot of aphids!
Image from Wikimedia

Sexual reproduction: a way to mix up DNA

But that’s not the whole story. Parthenogenesis is quick and easy, but there’s a reason that most animals do sexual reproduction. Even though you have to find a mate, there are some nifty benefits.

Every time sexual reproduction happens, the offspring gets some DNA from both parents. It inherits a unique genetic combination, different from either parent. And when the environment changes often, this reproduction strategy is better.

You can think of it like a card game. Every animal has a hand of cards that it is dealt at birth—these are its genes. It might have a card that tells it what color it will be, and another card for how fast it can run.

If an animal goes through asexual reproduction, it just passes on the same genetic cards to its child.

But with sexual reproduction, the animal takes half of its cards and combines those with half of their partner’s cards. The offspring inherits a set of genetic cards that’s a mixture from both parents.

Let’s go back to the pesticide-resistant aphids. One lucky aphid got a mutation that gave it pesticide resistance. And maybe a different aphid has a mutation that makes it better camouflaged.

The fastest way to combine these two useful mutations together is with sexual reproduction. If the pesticide-resistant aphid and the camouflaged aphid reproduce, their offspring can inherit both traits.

This makes sexual reproduction the best way for a species to adapt to a changing environment. You can combine useful traits together more quickly. 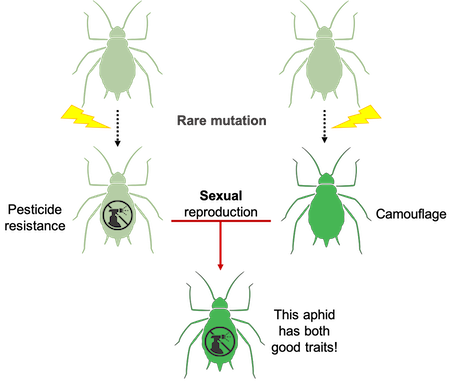 Sexual/asexual life cycles: the best of both worlds

A lot of animals that do parthenogenesis are also able to reproduce sexually. This means that these animals get the best of both worlds: a way to reproduce quickly when times are good, and a way to have genetically different offspring if times are not so good.

The soybean aphid’s life cycle is an example of that. In the fall, the soybean aphids mate and produce eggs. This way, the aphid can mix up its DNA for the next generation. Not just that — the eggs are weather-resistant and perfect for getting through the cold winter.

Once the soybean aphid babies hatch in the spring, they start to do parthenogenesis. Female soybean aphids clone themselves to make more females. This means you can get lots of aphids very quickly!

The soybean aphid continues to do parthenogenesis until the end of the summer. Then it again starts to produce males and switches back to sexual reproduction. 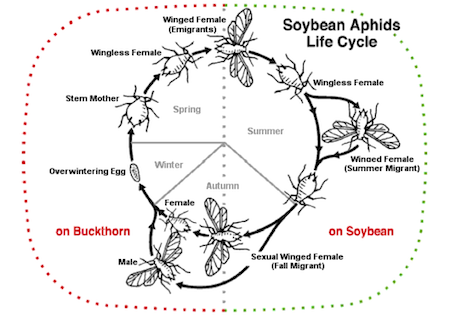 The life cycle of a soybean aphid
Image from Wikimedia

It’s not just aphids that do this. Baker’s yeast (which we use to make bread and beer) also get the best of both worlds. Yeast are happy to reproduce asexually if conditions are stable. However, when you put them in stressful conditions, they will start reproducing sexually. This lets them produce genetically different — and possibly fitter — offspring when times are tough.

Very few species are completely parthenogenic, or asexual. This is because only reproducing asexually can be risky. If the environment changes and is no longer so friendly for the species, all of the individuals will die if they are all genetically the same.

Asexual reproduction is most common in species that have large population sizes, like insects and microbes. With huge numbers comes some safety: rare mutations will help keep some genetic diversity around.

It’s less common in species with smaller populations. Rare mutations may not be enough, if there aren’t very many individuals around in the first place.

Nonetheless, parthenogenesis has been documented in some reptiles and amphibians. For example, there is an entirely female species of whiptail lizards,4 salamanders,5 and a type of crayfish.6

Scientists think that if there is any change in the environment, these species will be very vulnerable because they will be unable to adapt to the change. We will have to see if those predictions hold true in the future by continuing to study these parthenogenic animals!

What is parthenogenesis?
Female sharks that reproduce alone
All girl fish species