I know someone with a balanced translocation. The doctor said there are four possible combinations for her kids. Can you explain what they are?

Great question! Your friend’s doctor is right that there are four combinations for her kids.

This is important to know because two of the combinations might cause problems for the pregnancy and/or the child, and two won’t.

There are three different ways her kids could get a translocation too. There is also one way her kids won’t end up with one.

You might be wondering why this matters. Translocations can change the amount of DNA someone has and this can cause problems.

For example, Down syndrome happens when someone has an extra chromosome 21. In more severe cases extra DNA can lead to miscarriages.

Now this isn’t a problem for people with a balanced translocation because they have the typical amount of DNA. But as you’ll see below, it can be for their kids.

First off, what’s DNA? DNA is the set of instructions for making a living thing.

Our DNA is packaged in structures called chromosomes. Most people have 23 kinds of chromosomes, and two copies of each kind. So we have 23 pairs for a total of 46.

A translocation is what we call it when a part of one chromosome is swapped with or attached to another chromosome. In a balanced translocation, there isn’t any lost or extra information. All the parts of the original two chromosomes are there with the usual number of copies.

This kind of translocation is pictured below: 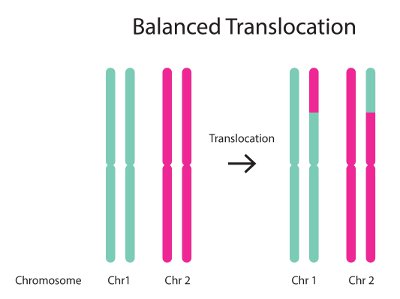 On the left are two typical pairs of chromosomes. I have made them each a different color to make them easier to follow. One pair is called the Chr 1 pair and the other is Chr 2.

I mentioned before that no information has been lost. Why does this matter? It turns out that it can be very important to have exactly two chromosomes.

As an example, let’s think about how the number of letters in a word can be important. The word “dessert” has two S’s. When we see this word, we know it’s referring to a yummy treat. If we rearrange the S’s, we still know we’re talking about a yummy treat.

However, if we delete one S, we change the meaning of the word! Now we’re not talking about a scoop of ice cream or a piece of cake anymore. Instead we’re talking about a place where it hardly ever rains.

What happens when we add an extra S? We end up with something meaningless. 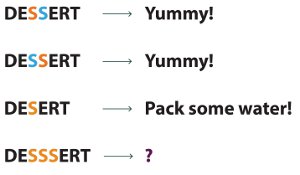 DNA sort of works the same way. There are parts of each chromosome that can cause problems if they are repeated or go missing.  .

Kids Get 23 Chromosomes from Each Parent

This adds up to 23 pairs, or 46 total chromosomes. 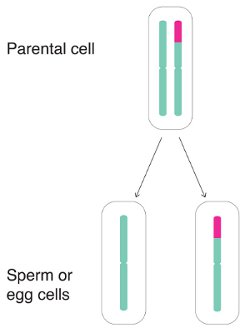 As you can see, one of this pair gets put into one sperm (or egg) and the other gets put in the second one.

This happens for all 23 pairs of chromosomes.

In real life this is a bit more complicated. Pairs of chromosomes can actually swap pieces in a process called recombination but this isn’t important for what I am talking about here. You can read more about that process here.

There are Four Combinations of Chr1 and Chr2

Now we know what a balanced translocation is and how parents pass on their chromosomes to their children. We have all the information we need to figure out the four combinations the child in question can inherit.

Let’s say a parent has the balanced translocation I showed earlier:

Let’s draw all the possible combinations of Chr 1 and Chr 2 in a table. In each column of the table, we place a different version of Chr 1. 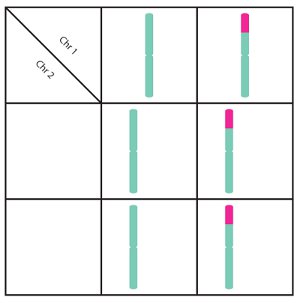 In each row we place a different version of Chr 2. 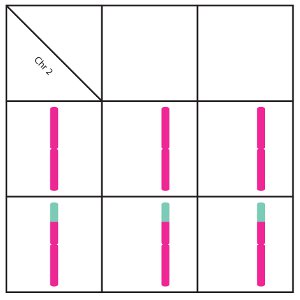 Now we fill in all of the boxes to show all the possible pairs. 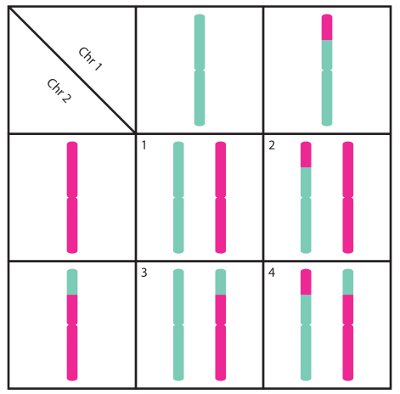 I have marked each combination with a number to make them easy to refer to.

In combination 1, the child will inherit two chromosomes that are unaffected by the translocation. This is like what you find in the child of a parent that does not have a translocation.

These are unbalanced translocations meaning some information has been lost and some has been duplicated. Our dessert has turned into a desert or a desssert.

Translocations Can Cause Health Problems

An unbalanced translocation can change the amount of DNA kids inherit. This can mean too many copies of some parts of chromosomes and too few copies of others.

This can increase the chance of miscarriage or developmental disorders. Click here to learn more about how translocations can impact the health of a baby?