Why is there more of a chance for transmission of Down syndrome if one parent has a balanced translocation?

-An undergraduate from India

In something like 96% of cases, Down syndrome is a random accident. Something happens while an egg is being made and that egg gets fertilized by a sperm. The end result is an extra chromosome 21 and a child with Down syndrome.

Or, less often, the reverse happens. There is a mix-up when a sperm gets made and this sperm then goes on to fertilize the egg.

In both these cases, the risks for the next baby having Down syndrome aren’t that much higher than typical. The usual number is a 1% risk or twice the risk for mom’s age, whichever is higher. The risk is so low because the Down syndrome is the result of a one-off accident.

Balanced translocations are a bit different. Moms and, to a lesser extent, dads can pass Down syndrome to their kids which means a higher risk.

This is even though the parents do not have Down syndrome themselves. They are silent carriers.

If mom is a balanced carrier that includes chromosome 21, then each of her kids has about a 1 in 8 or 12% chance for ending up with Down syndrome. If dad is the carrier, this falls to around 3 in 100 or 3%.

Scientists aren’t really sure about the difference between men and women. Perhaps men have some way of weeding out the sperm that might lead to Down syndrome. Or maybe these sperm don’t get to the egg as quickly as the ones that don’t cause Down syndrome.

While we don’t know why men are less likely than women to pass this on, we do know why they both do. It has to do with their chromosomes.

DNA Is Packaged in Chromosomes

The instructions for making and running your body are found in long stretches of DNA called chromosomes. Most people have 23 pairs for a total of 46.

We each get one set of 23 chromosomes from mom and the other set of 23 from dad. Here is what this looks like: 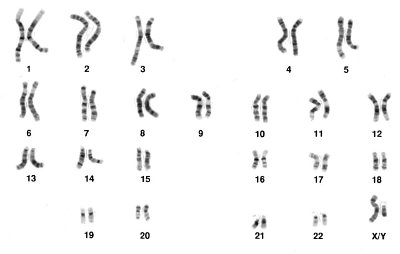 This is the set of chromosomes from a male. Note that the last pair has a big chromosome and a small one. This is the X and the Y.

It is really important that we have this exact amount of information. Most babies with 45 or 47 chromosomes don’t survive. And those that do often end up with conditions like Down syndrome (extra chromosome 21) or Turner syndrome (missing X chromosome).

Here is a set of chromosomes from someone with the most common form of Down syndrome: 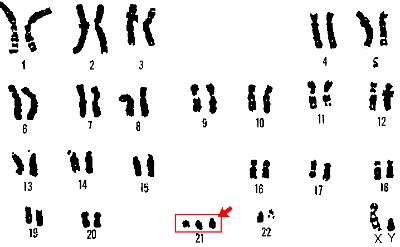 Note the extra chromosome 21. This upsets the balance of information leading to the symptoms associated with Down syndrome.

But sometimes having 45 chromosomes has no obvious effect. Like when two chromosomes end up stuck together.

Now no information is lost. Here is an example of one of these balanced translocations: 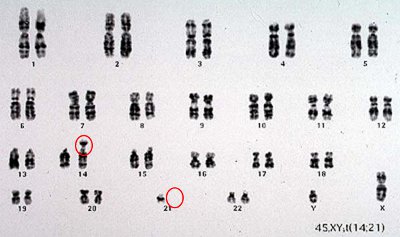 Looking at the red circles you can see that the missing chromosome 21 has moved and is attached to a chromosome 14. This person hasn’t lost a significant amount of information and so is fine. Even though he has 45 instead of 46 chromosomes.

Now while I said he is fine, that is only true up to a point. He will start to see the effects of this translocation when he tries to have a baby.

He and his partner are much more likely to have miscarriages. In the next section I’ll show why.

When we have a child we pass down one chromosome from each of our pairs. So mom passes down one of her chromosome 1’s one of her 2’s and so on. Dad does the same. In the end the child has two pairs of 23 chromosomes for a total of 46.

Let’s look at this process in a little more detail. I’ll focus on just two pairs:

Imagine this is mom’s two pairs of chromosomes: 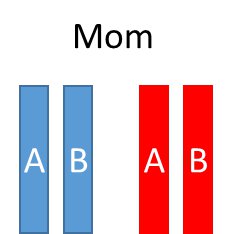 Next let’s add dad’s chromosomes to the equation:

Ok, here is one possibility when they have kids: 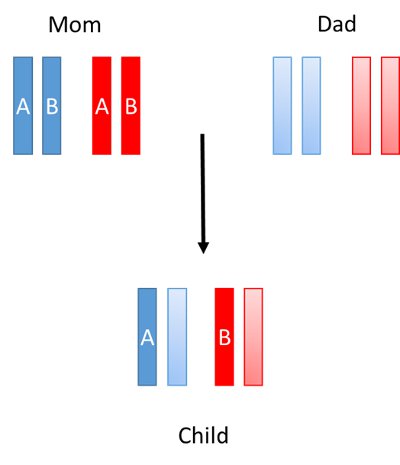 As you can see, each parent passed one of their blues and one of their reds. By chance, mom happened to pass her blue “A” and her red “B.”

The child could have also gotten a blue B and a red A and so on. There are four possible combinations for mom.

Whichever combination the child gets from each parent, he or she still has two blue chromosomes and two reds. The child has a complete set of information (at least for these two pairs). 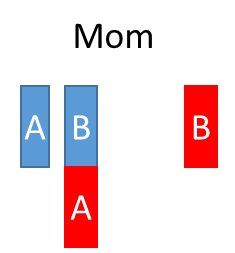 As you can see she has all of her information, it is just arranged differently. (I have made the chromosomes shorter just to make them easier to work with.)

Now we can add dad back again:

Now let’s have them have a child: 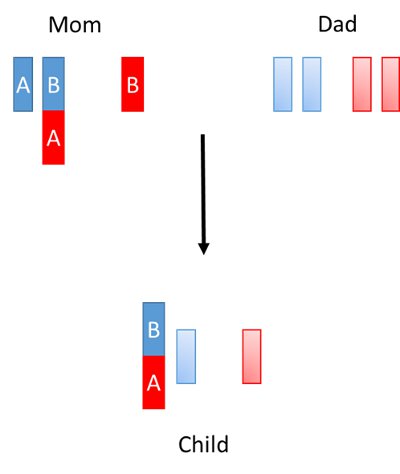 OK so what happened here? Dad is easy, he passed one of each of his chromosomes.

From the first pair, mom passed the chromosome that is made up of both the red and the blue ones. And from the second pair, she happened to pass the empty spot.

Here is another possibility: 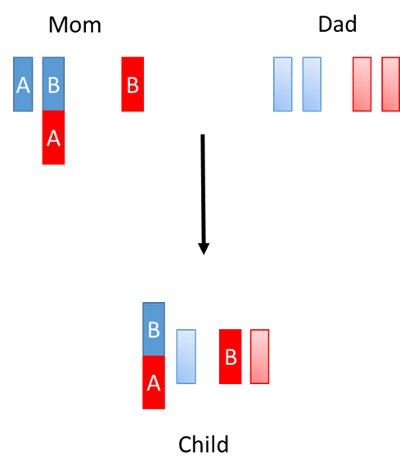 In this case mom passed the stuck together chromosome again but she also passed her red “B” copy. Dad as usual passed one of each.

Now this child has three copies of one of his or her chromosomes. If it was chromosome 21, the child would have Down syndrome.

If it was a different chromosome like 14 or 15 (two common ones involved in these sorts of translocations), the result would be a miscarriage. The child could not survive all of that extra information.

And of course, mom might have passed blue “A” and nothing from the red pair giving this child: 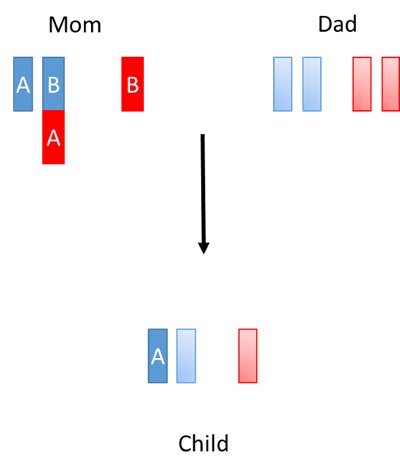 Now the child is missing some information. Unless it is the X chromosome that is missing, the end result is almost always miscarriage.

It is also possible that the child gets the blue “A” and red “B” from mom and has just the right information packaged in the usual way: 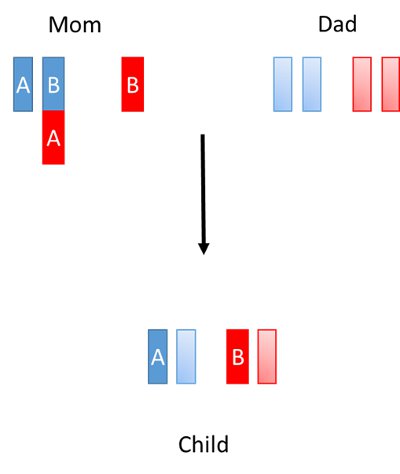 So this is why a parent who is a balanced carrier of a translocation involving chromosome 21 is at a higher risk for having a child with Down syndrome. Sometimes they will pass down the combination that mimics having an extra chromosome 21.