My husband just learned who his birth parents are. Unfortunately both are deceased. The birth father’s family wants my husband and the last surviving sibling (an aunt) to be tested to make sure the birth mother named the right guy! I understand the test they need is called an avuncular test. Is there a specific type of lab that we can use to make sure they are testing enough and properly to try to achieve the most conclusive result, whichever way that goes? There are so many types of labs on the web...

The internet is certainly clogged with lots of genetic tests claiming they can help you tell if two people are aunt/nephew. Unfortunately, most can’t really give a definitive result every time. Or even most of the time.

Luckily there are much, much better tests out there. These tests don’t go by the official “avuncular” name because they can tell lots of different relationships in a single test. They are usually called ancestry or relatedness tests.

The test you are looking for comes from companies like 23andMe or AncestryDNA. Both will be able to see if the two of them are either aunt/nephew or unrelated to each other without any of the wishy-washiness of less powerful tests.

In fact, these tests can even see first or second cousin relationships and with a bit of luck even more distant relations that that. This means you can test more than the closest of relatives if need be to confirm a relationship.

If I ever wanted to know if someone was a long lost aunt, this is the kind of test I would take. But they are not perfect.

For example, they wouldn’t be able to tell if that long lost relative was an aunt, a half-sister, or a grandma. That is because all three would share around the same amount of DNA.

But for questions like yours, whether he is related to this woman as a nephew or not related at all, these tests are as definitive as you can get. The results are obvious.

In the next section I’ll explain why this is.

Most people’s DNA is split into 23 pairs of chromosomes. Each chromosome is one long piece of DNA.

A standard test looks at a spot here and a spot there amongst these 23. A good avuncular test will look at 30, 40, or even 50 different spots.

The test sees how many of these markers (as these spots are called) two people have in common and figures out relatedness that way.

This is perfectly fine for paternity cases. But for more distant relationships, even 50 isn’t enough.

For example, an aunt and a nephew typically only share around 25% of their DNA. This makes it very hard to tell related and unrelated people apart with so few markers.

By chance, many unrelated people will share DNA at the same number of markers as half siblings. You’ll end up with a percentage chance the two are related enough to be half siblings. In the end you won’t know for sure.

Tests like the one offered by companies like 23andMe or AncestryDNA look at hundreds of thousands of spots instead of 50. Now we get a clearer image.

When you start to look at so many markers, you can do something you couldn’t do before. You can line them up, one after the other along the chromosome. This lets you recreate a rough version of each person’s DNA.

Here is an example from 23andMe of what looks to be uncle/nephew: 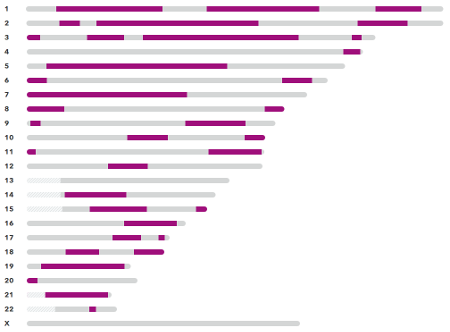 The chromosome pairs are shown as a single long rectangle numbered 1-22. The last one is the X chromosome (click here to learn more about it and its partner in biological males, the Y chromosome).

The purplish/pink areas are where spots lined up one after the other on a particular chromosome. This is the DNA these two people share.

The gray parts are where the spots don’t line up like this. This is DNA that they do not share.

Here is what the results look like for two unrelated people: 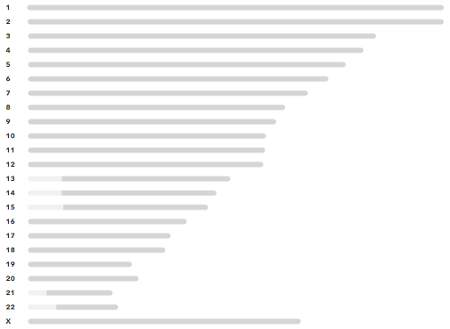 To make it even easier to see, here they are side by side:

Even tiny like this it is easy to see. If you get something like the result on the left, she is his aunt. A result like the one on the right means they are unrelated.

As I said, though it gets trickier if you want to figure out an exact relationship from DNA. Here is a side by side of an uncle/nephew and a half-brother and half-sister:

Not so obvious is it? From this you can’t really tell which result shows half-sibling and which shows avuncular. But again, in both cases you know they are pretty closely related! Those purplish/pink stretches give it away.

And just for fun, here is what a distant cousin looks like: 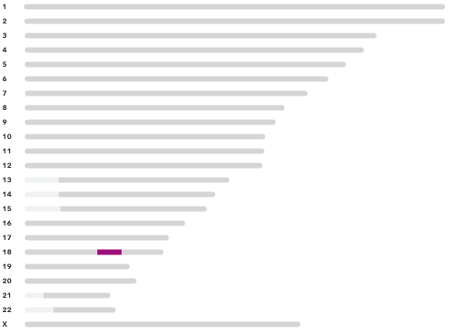 That one bit on chromosome 18 shows these two share a recent common ancestor. While we can’t tell if they are 4th cousins or 7th cousins, we do know they are related.

There is no way one of those other tests could ever see a relationship like this. Relatedness/ancestry tests like these are incredibly powerful. And should be the ones people turn to for anything but paternity tests.