-A curious adult from Mexico

Many of the DNA tests you might come across on the internet for showing this kind of relationship wouldn’t be very useful. Most of them are too weak to see such a distant relationship.

In fact, these tests might not even see it with one of the parents included. They have a better chance but it is still an odds game. They can only say how likely it is that two people share a single parent.

To see a half sibling relationship with just the half siblings, you need a test like the one offered by 23andMe and other similar companies. With the right test from these companies, it should be obvious whether two people are related or not. And how related they are.

The difference between these tests and the less powerful ones is how much DNA they look at. The first set looks at under 100 different spots on the DNA while the second set looks at hundreds of thousands of them.

By looking at so many different parts of the DNA, the more powerful tests can actually say whether or not two people share enough DNA to be half siblings. The other tests can almost never do this.

The reason for this isn’t as obvious as you think. By looking at so much of the DNA, the more powerful tests can actually reconstruct both people’s DNA.

They are now essentially comparing all of the DNA of these two people instead of just a few spots. This lets them see how related two people are.

*Let me know if I have left a test off or not!

Most people’s DNA is split into 23 pairs of chromosomes. Each chromosome is one long piece of DNA.

A standard test looks at a spot here and a spot there. It sees how many of these markers (as these spots are called) two people have in common and figures out relatedness that way.

For more distant relationships, this can be a problem. For example, half siblings only share around 25% of their DNA. This makes it very hard to tell related and unrelated people apart with so few markers.

By chance, many unrelated people will share DNA at the same number of markers as half siblings. This is why having a parent or two involved in the testing can help. They can help to rule out some of the ones that don’t match up.

But even then you might not be able to tell for sure. You would probably just get a percentage chance the two are related enough to be half siblings

This all changes when a company ramps up to hundreds of thousands of spots. Now we get a clearer image.

When you start to look at so many markers, you can do something you couldn’t do before. You can line them up, one after the other along the chromosome. This lets you recreate a rough version of each person’s DNA.

Here is an example from 23andMe of two half siblings:

The light blue areas are long stretches of shared DNA lined up one after the other. The unshaded parts are where the markers don’t line up.

The first thing you can see is that there is a lot of shared DNA. For reasons I won’t go into here, this shows that the two people share around 25% of their DNA. (Click here to learn more.)

It is from this calculation they figure out your relationship. They have essentially been able to recreate a rough version of each person’s chromosomes. This is completely different than the companies that look at tens of markers.

Here is what the result would look like if the two of you were unrelated: 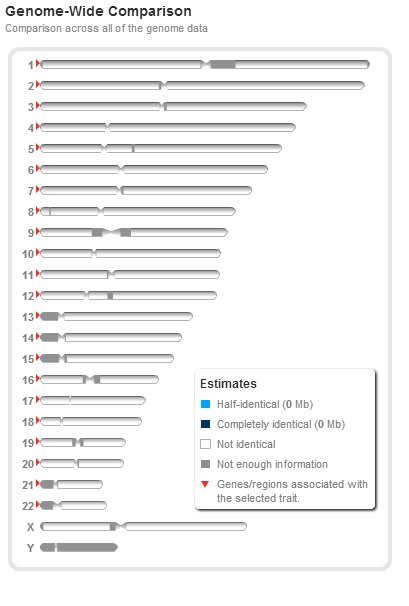 As you can see, there is no light blue shading. There are no stretches of shared DNA although since the two are human, there is plenty of shared DNA.  After all, humans share something like 99.5% of their DNA!

The key is that there aren’t any big stretches of identical DNA. That only happens with a recent ancestor.

Each company will report back on how much DNA the two of you share and give some possible relationships.

Half siblings share 25% of their DNA but so do an uncle and a nephew or a grandparent and grandchild. The companies will make a reasonable guess based on the data but they can get it wrong.

For example, when my half-sister and I did a 23andMe test, the result came back that we were grandfather and granddaughter. A bit mortifying but understandable given the 30 or so years between us.

Now it was easy for me because I knew we were half siblings. They had a spot where I could mark our true relationship and update it that way.

I am not sure what would have happened had I not known what other relationships share 25% of their DNA and that we were half siblings. Maybe I would have headed down the wrong path in figuring out our relationship.

But that wouldn’t be the case for you. You are trying to see if you are half siblings or not related at all.

If the result comes back around 25%, then the two of you are most likely half siblings. If you end up sharing little or no DNA, then you probably aren’t related. And if you share 50%, you may be full sibling!