Can a genetic modification/mutation make the body achieve immortality?

-A curious adult from Ivory Coast

That’s a very interesting question! The short answer is no, probably not for humans.

The most likely reason we get old and die is that living takes a lot out of us. The buildup of damage over time causes us to break down and eventually die.

Since most of this damage is the result of being alive, we can never really keep it from happening. We might be able to slow it down genetically in a number of ways by limiting the damage or finding better ways to fix it. But we will probably never get rid of it completely.

While there may not be a single genetic fix, that doesn’t mean all hope is lost! There might be technological ways to preserve at least your mind and memories forever. In fact, something like this was the basis of a recent Black Mirror episode.

The idea is that the best way to achieve immortality is by copying your mind to a computer. This would make your consciousness free from the biological challenges to aging. However, you asked biological scientists about immortality, so we’ll give you a biological answer.

To get to the long answer about genetically engineering immortality, we need to think about its enemy: aging! As people get older, their bodies change. Aging is the accumulation of these changes.

What makes the body change?

Our Bodies Get Worse at Fixing Themselves as We Get Older

Let’s think about wear and tear. Our bodies get damaged over the course of our lives.

This happens in ways that we can see and feel. Maybe your joints start to ache or those laugh lines get deeper and deeper.

Some scientists think the reason this kind of stuff gets worse as we get older is because our bodies get worse at fixing the damage.

Our body is made of cells. When some parts of our body get damaged we make more cells to replace the damaged ones.

There are special kinds of cells in our body that do this. They’re called stem cells.

Stem cells in older people don’t do as good of a job of making new cells to fix damage. That’s because over time stem cells get damaged too.

Each time stem cells fix something that’s damaged they need to make a copy of themselves. Whenever stem cells make a copy, there’s a risk that they will make a mistake.

The more copies a stem cell makes of itself, the more likely it is to get damaged. Damaged stem cells do a bad job of repairing our bodies.

Let’s look at how the process works. The first step is that one of these stem cells divides to create two daughter cells: 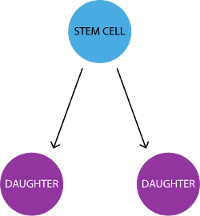 If the process stopped here, there would be no stem cells left. This is why one of the daughter cells is actually a stem cell.

Now it’s properly labeled in the picture below. The other cell, that purple one in our picture, goes on to replace the damaged cell. 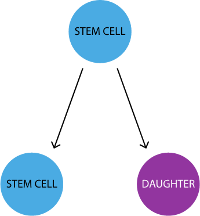 The new stem cell will be the one that divides again. This happens over and over.

The problem happens when the stem cell makes a mistake as it makes a copy of itself.

Here, the green stem cell has a mistake. Now all the cells that come from that stem cell will have the mistake too. Over time these mistakes can build up.

These mistakes make it harder for stem cells to do their job repairing damage.

Mutagens cause mutations, or changes, in our DNA. The longer we live, the more time we have to be exposed to mutagens.

Mutagens can come from many sources. Our cells even make mutagens when we eat too much food. When our cells make energy from food, they also make something called Reactive Oxygen Species (ROS). ROS damages our DNA.

Scientists have tested how ROS from food affects aging using mice and worms. When these critters are fed less than normal, they have less ROS and they live longer. A lot of scientists think these two effects of eating fewer calories are probably related. It’s possible this could work for people too.

We live as long as we do because our bodies are pretty good at repairing the DNA when it gets damaged. But eventually, some mistakes escape the repair process. This can lead to problems like cancer, which definitely gets in the way of immortality.

Let’s pretend we know the piece of DNA we need to change to make this happen. Eventually, that piece of DNA would also be damaged. It would not be able to fix itself. That makes this kind of immortality impossible.

But maybe we can tweak the system to improve our cells’ ability to repair their DNA. In the end we wouldn’t be immortal but we might live longer.

Not Worth the Energy

Sometimes our cells don’t have enough energy to do both. So like someone on a budget, a cell has to “decide” where to spend its energy.

Here’s an example. Imagine you are very cold. At the same time, one of your cells gets a mutation in its DNA. That cell has to make a choice: spend its energy on fixing the mutation or on keeping you warm. Keeping you warm keeps you alive now, so that’s where your cell spends its energy. The mutation doesn’t get fixed.

That mutation can contribute to you aging. Keeping it means you get to stay alive right now. This is a big reason we age—a tradeoff between living longer and surviving now.

Over the course of evolution cells had to make this kind of choice many times. This shaped cells’ decision-making process for spending energy.

Eventually a sweet spot between all the other activities and DNA repair is found and that’s where we are today. This is just one of many reasons we have evolved to fix our DNA like we currently do.

Back to your question: can a genetic modification make the body achieve immortality? If we wanted to become immortal we’d have to change how our cells use energy.

It would be very complicated. And it’s not the only thing we’d have to change.

Other cells can tell stem cells to stop working

We’ve talked about how DNA damage can cause us to age. One of the ways our bodies protect us from this DNA damage is called senescence. Even though senescence protects us, it also contributes to aging!

There are cells in our body with the ability to divide. Sometimes cells lose that ability.

When this happens, we call those cells senescent. This is a tool our bodies can use to keep cells with damaged DNA from making copies of themselves and spreading those DNA-damaged cells.

Senescent cells can talk to their neighbors. When they talk to their stem cell neighbors, they tell them to stop repairing damaged tissues. This is how we get the achy knees and wrinkles we talked about before.

It turns out that cells have a division countdown! The countdown clock is called a telomere, which is part of your DNA. In the cartoon below there is a blue cell. The DNA inside is pink and yellow. The yellow part of the DNA is the telomere. 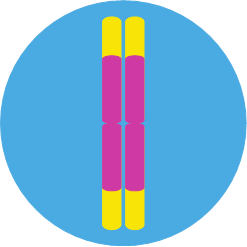 Every time a cell divides it has to make a copy of its DNA. Each time this happens a small amount of the telomeres can’t be copied. When the telomeres become too short, the cell becomes senescent.

One mutation could not keep your telomeres long and also protect your stem cells from making mistakes! But perhaps multiple mutations could at least partly solve the problem.

Some parts of the body age in different ways

There are parts of the body where cells don’t divide. Your brain is a good example of this. Once a brain cell dies, no new cells replace it. This makes your brain different from the body parts we talked about before.

Even though your brain is so different from everything else in your body, it ages too! Making a brain immortal would work very differently from making skin immortal. It’s hard to imagine a single mutation that would work in both places.