If my blood group is A positive, does that mean one of my parents would have to be the same?

- A curious adult from Alaska

No it doesn’t. Neither of your parents has to have the same blood type as you.

For example if one of your parents was AB+ and the other was O+, they could only have A and B kids. In other words, most likely none of their kids would share either parent’s blood type.

And that’s just one of many possibilities. There are lots of other possible combinations where two parents without blood type A can have a child with one. Here they are:

Now as to the positive part, that adds even more possibilities. Here is a table that I think goes through all the possible combinations where an A+ person would have a different blood type from his or her parents: 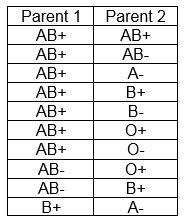 Before moving on, it is probably important to mention that there may be rare exceptions where an A+ child can come from parents with a different combination than one of these. Have a look through our previous answers on blood type to see how this might happen.

What I thought I’d do for the rest of the answer is focus on why these combinations can all give an A+ blood type. As you’ll see it has to do with two different genes and the different versions they come in.

Alphabet Soup: How A, B, and O are Different

First let’s go over a little bit about what it means to be A positive.

Blood cells naturally have lots of different sugars on their surfaces. The sugars that doctors look at to determine one part of your blood group come in three flavors – “A,” “B,” or “O.”

As you might have guessed, the A flavor makes the A sugar, and the B one makes the B sugar. It turns out that the O flavor doesn’t make any sugar.

Two Copies of Each Gene, One from Each Parent

A lot of these instructions are found in long stretches of DNA called genes. Each gene has the instructions for one small part of you.

One of these genes goes by the name ABO. It comes in three flavors, or “alleles” —A, B, and O. Your blood type is determined by the combination of alleles of this gene you get from your parents.

When you inherit a gene, you usually get two copies, one from your female biological parent and one from your male one. What this means for the ABO gene is that you can only have two of the three alleles of the ABO gene. The following chart shows you the different combinations that are possible:

Now here’s the part that’s a little complicated. When we talk about someone’s blood type, we care less about the gene combinations, and more about what they’re able to make. For example, someone that’s “AO” will be type A, because the O flavor of the gene makes no sugar. This person only has the A sugar.

Here are the blood types associated with each of the combinations of alleles:

As you can see, even though there are 6 different allele combinations, there are only 4 different blood types.

Now we have everything we need in order to explain how two parents without an A blood type might have a child with the A blood type. Here is an example of one of the ways we talked about in the first section: 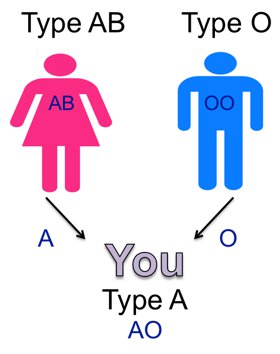 In this example, your female biological parent is AB and your male one is O. Remember we only get one of one parent’s two copies and one of the other parent’s.

(I thought it would be important to mention that not every family looks like the family in this example – you may have two dads or two moms, who had you with the help of a donor. However, you would get your blood type from your female biological parent and your male biological parent.)

So now I know what you’re thinking – you’re A positive, so what does the “positive” part mean?  It turns out there’s another important molecule on blood cells called the Rh protein.

You either have the Rh protein or you don’t. If you have it, you’re positive, and if you don’t, you’re negative. If you’re interested in knowing more about the Rh protein, you can visit one of our previous Ask a Geneticist answers.

As with the ABO sugars, one gene controls your Rh type. This gene comes in either a “working” form – meaning it makes Rh protein – or a form that makes no protein at all.

For you to be A positive, you must have inherited at least one working copy of the Rh gene from one of your parents. However, we don’t know for sure if one or both of your parents is Rh positive.

Instead of drawing out every combination of ABO and Rh, below is one example of how you might be A positive with neither of your parents being the same blood type as you: 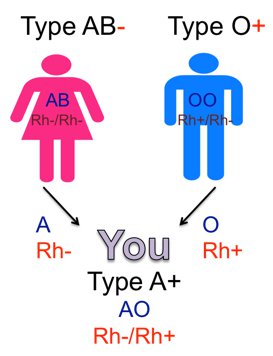 In this case, the female happened to pass an A and a negative, and the male an O and a positive. So you are “AO +/-” genetically, meaning you have an A+ blood type.

We hope you enjoyed learning about blood types! If you’re still curious about blood types, including how and why the body doesn’t accept blood that doesn’t look like its own, check out this useful link.