-A high school student from the United Kingdom

You can stop worrying…an A parent and an O parent can definitely have an O child. In fact, each child of these parents could have a 50% chance of being O.

Now this isn’t to say that A isn’t dominant over O. It is. In fact, it is its dominance that caused your O blood type!

Because A is dominant, that means your mother could carry a hidden O. If she does then when she gets pregnant, each child has a 50% chance of getting her dominant A and a 50% chance of getting her hidden, recessive O. If the child gets the O from mom and an O from dad, he or she will have an O blood type. This is almost certainly how you ended up O.

This is the simple answer for how an A mom and an O dad can have an O child.  To better understand what is going on here, we need to take a step back and think about how our genes work.  Once we do that, I think it’ll become even clearer where your O blood type came from.

The part of our blood type we are discussing here comes from the imaginatively named ABO gene.  This gene comes in three different versions—A, B, and O.

Like most of our other genes, we have two copies of our ABO gene, one from mom and one from dad.  With three versions and two copies, here are all the possible gene combinations any of us could have: 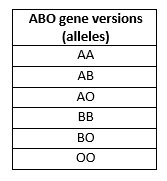 As you undoubtedly know, there is no AO or BO blood type.  This is because A and B are dominant over O.  What this means is that an AO blood type looks like A in a blood test and a BO like B.  We can now add blood type to our table: 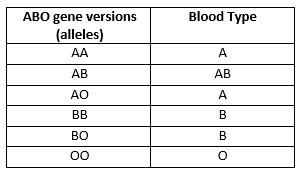 As a side note you may have noticed that the AB blood type is made up of an A version (or allele) of the ABO gene and a B version.  This is because A and B are codominant—if you have both you can see both in a blood test. Neither is dominant over the other.

OK now we are ready to tackle your particular question.  All we need to do is say that your mom is AO and your dad is OO.

Getting O from A and O

To figure this out I am going to dust off the old Punnett square.  This is a very useful way to figure out the chances of a child getting a certain trait.

So the first thing we need to do is figure out what mom and dad’s versions of their ABO genes are.  This is easy in this case.  Mom has an A and an O and dad has two O’s.

The next step is to set up a 2 X 2 square with mom’s versions on top and dad’s along the side.  Here is what your family’s would look like:

Next you combine the squares to get each possible genotype for each child.  (Genotype just means the two versions that child has.)  Here is how we do the first one:

This first child got an A from mom and an O from dad.  He or she is AO genetically which means A blood type.  We can now fill in the rest of the square like so:

That is a useful way to figure out the chances and all of the possibilities, but it is sometimes a bit too abstract.  Another way to show what happened in your particular case is with pictures like this: 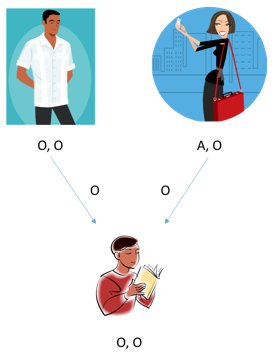 If mom had passed an A instead, then the child would be AO and have an A blood type.  In this case the child’s blood type depends on mom because dad can only pass an O.

So you managed to be O because A is dominant.  Its dominance allowed your mom’s O to be hidden, ready to be seen in you.