— A high school student from LA

Your biology teacher is most certainly right that blonde hair and blue eyes are indeed recessive traits!

There’s a few possible ways in which your friend ended up with blonde hair and blue eyes.

Albinism can be ruled out if your friend is not light-skinned. Albinism is an inherited genetic condition that results in loss of melanin pigment in the eyes, hair and skin. People with albinism have severe vision problems, often becoming “legally blind.”

Since poor vision is part of the diagnosis for albinism, if your friend does not have poor vision, they are not albino. So we’re left with two possibilities. 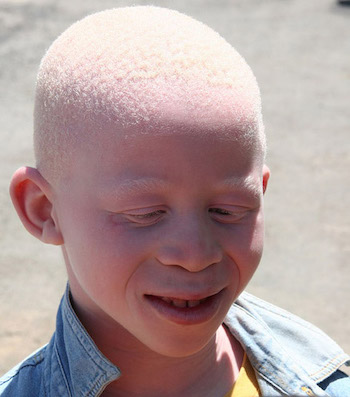 Blue eyes actually originally came about because of mutations! Thousands of years ago, someone had a random change in the genes that affect eye color. Over time, this genetic difference spread and became more common.

But the chance of anyone having a new random mutation that does this is pretty low.

Remember, our bodies have “proofreading” repair machinery that fix these mutations. So even if a mutation occurs, these enzymes swoop in and try to correct them! Usually our cells catch these mistakes and fix them.

But occasionally, some mutations get missed and eventually inherited. Scientists have studied how good these repair enzymes are, and how often they make mistakes. Based off these estimates, one would expect to find one mutation at a specific spot in a specific gene per one million people.1

The odds of a new mutation causing blue eyes is very unlikely, especially if two siblings in the family have blue eyes. Literally a 1 in a million chance!

The most likely genetic explanation for your friend is that her father is a carrier for blue eyes and blonde hair. Let’s unpack what it means to be a genetic carrier.

Everyone has two copies of each gene, one from their mom and one from their dad. Each gene can come in slightly different versions, called alleles. So for example, a gene that affects eye color could come in two versions: a blue eye allele, and a brown eye allele.

For most pigmentation genes, the allele for darker colors is stronger, or dominant. You only need to inherit one brown eye allele to see the color.

The allele for lighter colors (like blue eyes!) is weaker, or recessive. You won’t see these light colors unless you inherit two copies of the allele.

So someone with one brown allele and one blue allele would have brown eyes. Even though they have the DNA for blue, it’s hidden. Someone like this is called a carrier, because they invisibly carry the DNA for blue eyes.

A recessive gene can hide in a family, and take a few generations to reappear. But if two carriers for blue eyes have a child, they can have a blue eyed child! 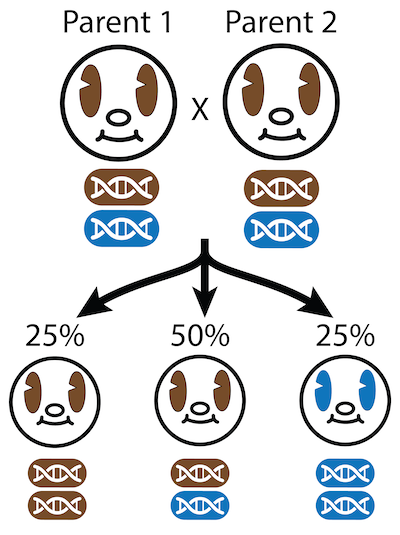 And the chances of a blue eyed child are even higher if one of the parents has that recessive trait.

Some traits are inextricably tied to your ancestry. Certain ethnicities share some traits more frequently than other groups.

That means knowing your ancestry can reveal information about your genetics.

The likelihood of your friend’s father being a carrier for blonde hair and blue eyes from Caucasian ancestry is actually quite high.

In fact, many African Americans have European ancestry, on average between 20 and 25%.6

For many people, learning their ancestry may come as a shock. Learning information that calls into question your identity can feel overwhelming and disorienting. Our genes don’t just tell us about ourselves now, but also give us a window into the past.

Sometimes that past is a painful history--a memento of slavery, bondage by another nation. With the stupendous rise of at-home genetic testing, many people around the nation are now facing their identities in a very new way, in light of our “hidden” genetic information.