What is the Bombay blood group?

- A curious adult from the US

Perhaps you have heard of the “blood type gene”. The blood type gene can come in three different versions: A, B or O. The versions you inherit determine whether your blood is type A, type B, type AB, or type O.

Appropriately, the blood type gene is named ABO. When we talk about the genetics of blood type, we typically only refer to the ABO gene. And that’s okay. Usually we don’t need to go into greater detail.

Bombay blood group is different. Everyone in this group tests as having type O blood, no matter what their ABO genes are. Imagine someone with the A version and the B version of ABO. They should have type AB blood. But if they are in the Bombay blood group, they will still test as type O.

That’s because there are actually multiple genes that affect blood type. ABO is not the only one. Bombay blood group is caused by one of the other genes. So let’s delve a little deeper into the genetics of blood type!

An Order of Operations

For many genes, we say one version of the gene is “dominant” to another version. This is fairly common in genetics. In fact, it happens with the ABO gene, where A and B are both dominant to O.

But some traits aren’t as simple. Often, multiple genes affect the same trait. One way this might occur is when the genes act in a sequence with each other.

Gene 1 is epistatic to Gene 2


One example of epistasis is baldness. Baldness is epistatic to hair color. If you get the gene for baldness, it does not matter what gene you get for hair color. You will be bald.

One working “H” version of FUT1 is enough to allow ABO to do its job. But if you have two broken “h” versions, the ABO gene no longer sets your blood type.

People in the Bombay blood group have two copies of the broken “h” version of FUT1. Their broken “h” versions prevent ABO from affecting their blood type. No matter what their ABO gene says, they always have type O blood.

A matter of inheritance

It’s even rarer in other parts of the world! Among people of European ancestry, Bombay blood group is literally a one in a million event.

But as rare as it might be, it does happen. And when it happens, it can result in unexpected patterns of inheritance.

Since Bombay blood group is rare, dad almost certainly has two working “H” versions of the FUT1 gene. Let’s also say his ABO gene has an O version and B version. He will have type B blood.

Based on mom and dad’s blood types (O and B), they would expect their children to have either type B or type O blood. But because mom has two A versions of the ABO gene, she’ll pass the A version to her children. This couple could have children with type A or type AB blood, which would seem to have come from nowhere!

But, it turns out that these results were possible after all. All it took was epistasis and the Bombay blood group.

Let’s look at what happens with Bombay blood group at the molecular level.

In genetics, we like to talk about which versions of a gene produce which traits. But when we do this, we are skipping a few steps. Genes don’t produce traits directly. Instead, each gene helps make a specific protein. Then, those proteins do things in the cells of our body. The overall effect of those proteins is what we call our trait.

Our blood type trait is the result of several genes working together, including ABO and FUT1. The proteins made by these genes decorate your red blood cells with chains of sugars.

Your red blood cells are decorated with chains of sugars. ABO adds the last sugar to the chain. Different versions of ABO add different sugars, which determines your blood type.


So now you know what blood type really means! It is based on the identity of the last sugar in a chain that hangs off of your red blood cells.

This is where Bombay blood group comes in. 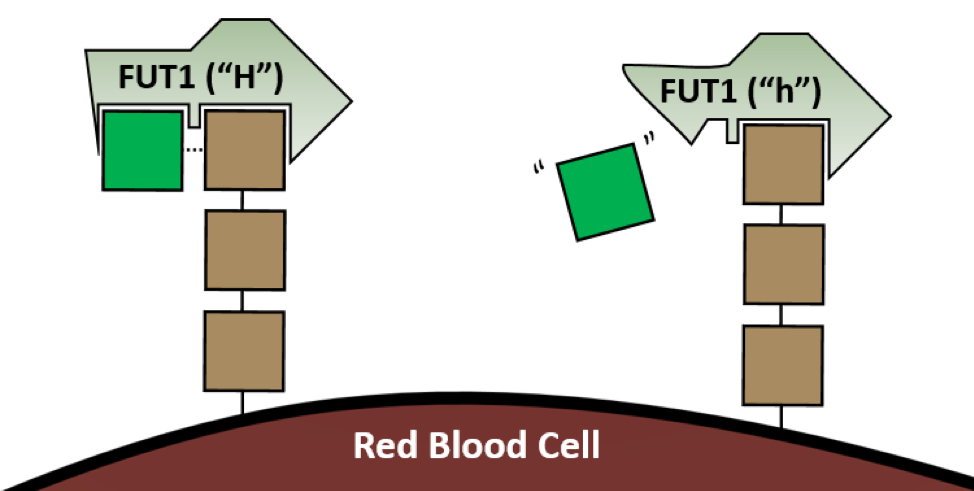 The “H” version of FUT1 adds a sugar to the chain. The “h” version does not.


People in the Bombay blood group have two broken “h” versions of FUT1. As a result, they can’t make the H antigen.

The protein made by ABO will only attach its sugar to the H antigen. So if you are in the Bombay blood group, and you don’t have any H antigen, your versions of ABO do not matter. Without the H antigen around, none of them will be able to do their job. 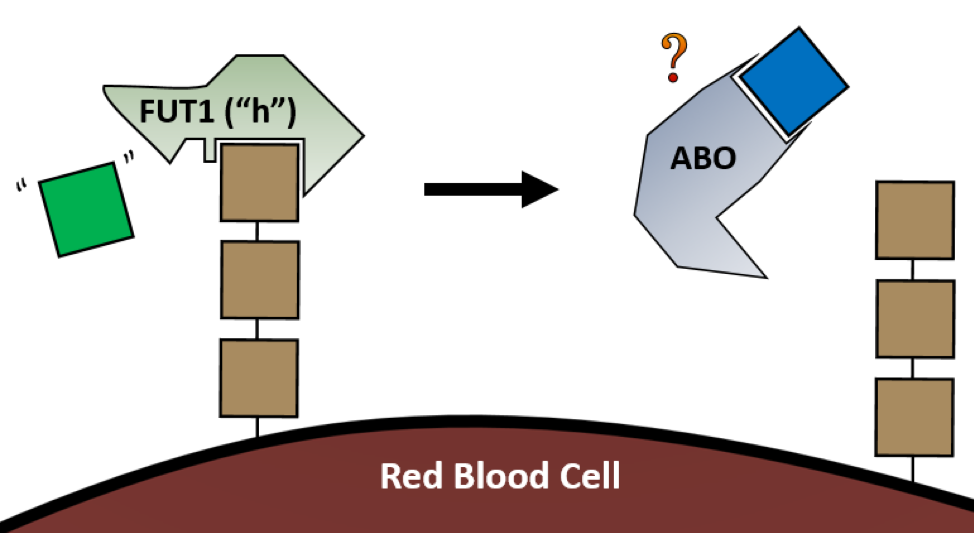 If you only have broken “h” versions of FUT1, you won’t make any H antigen. Since the ABO protein acts on the H antigen, it can’t find a place to do its job.

The answer has to do with how we test for blood type. People in the Bombay blood group don’t have the H antigen. They also don’t have the A antigen or B antigen.

Blood tests don’t look for the H antigen. They are only looking for A and B. Someone who doesn’t have A or B is assumed to be normal type O. So, the blood test simply can’t tell the difference between type O blood and the Bombay blood group.

An O parent with Bombay blood can have an AB child

Other unusual blood types can also lead to children with unexpected blood types, including Cis-AB, Chimerism, and Rare mutations