My aunt (50 years old) was recently diagnosed with aplastic anemia.  She comes from a family of eight children.  All seven of her siblings were tested to see who would be a bone marrow donor match.  One match was found, and some of the other siblings were matches with each other.

I am wondering what makes siblings donor matches with each other over other siblings.  I understand that it is in their genetic makeup and that they have a 25% chance of being a match with each sibling.  Please let me know if you can clarify for me what would make a closer match between some siblings than between others.

-A graduate student from California

The easiest way to see why this is true is to imagine the genes you need to match as different colored rectangles.  This analogy really only works for families; we will discuss nonrelatives later.

OK so to be a match, two people need to share two of the same colored rectangles.  This is what a match would look like:

Person A could donate bone marrow to Person B and vice versa.  Looks simple enough except as you already know, it isn’t.

Whew, that was a lot.  Let’s go through a quick example to see why this explains the 25%.

Imagine we have a dad with a blue and a red rectangle and a mom with a green and a purple rectangle.  They’d look like this:

When they have kids, each parent passes down one of their two rectangles.  The rectangle that is passed down is chosen totally at random.

When you do the math, this translates to a 25% chance for two siblings to end up with the same colored rectangles.  Here are those four possibilities: 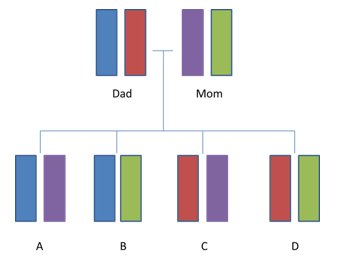 It is important to keep in mind that while these are the four possibilities, this does not mean that if you have four kids they will all have a different set.  You could easily get four kids that all share the same two rectangles.  Or you could get three that match and one that doesn’t.  Or, of course, all four might not match.

The rectangles we talked about earlier are actually sets of four HLA genes.  These genes are called HLA A, HLA B, and HLA C, and DRB1.

What these genes do is decorate all our cells with a specific set of markers.  Our immune system is constantly checking our cells, making sure they have the right set of markers.  Those that don’t are destroyed.

Our bodies are particularly finicky about the four genes used for bone marrow transplant matching.  You pretty much need to match at all of them or your body will reject the transplant.

The same sorts of rules apply.  We have two copies of each gene and the copies are usually different versions.  This means that a donor and a recipient need eight matches, not just two.  Even if the donor is lucky enough to get away with just seven out of eight matches (which does happen sometimes), we are still talking about way less than a 25% chance for two siblings to match.  In fact, we are talking roughly about a 1 in 256 chance for eight out of eight matches.

The reason siblings have a 25% chance of matching is that these genes are almost all passed down as a set.  Even though there are four different genes, they travel as a single unit.  So here is what our rectangles would actually look like for a match:

Here, each square represents one of the four different genes.  A represents HLA A, B HLA B and so on.

This seems like a much harder match than what we were talking about before but for siblings it isn’t.  Siblings tend to inherit whole blocks of these genes.  Here are the four possibilities yet again: 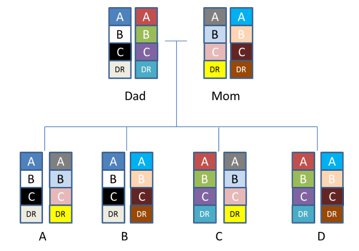 Even though each rectangle is a bit more complicated, two siblings still have a 25% chance of being a match.  But the same is not true for nonrelatives.

Unrelated people do not have to have the same set of four blocks in their HLA genes.  They might have the same HLA A version but it might be linked to a different HLA B version.  So two random people might look like this:

These two only match at two out of eight (the A on the first one of each pair and the B of the second one).  To match at seven or eight you need to look at lots of different people.  Luckily there are matches out there for everyone…we just need to find them.