Can a baby be born lactose intolerant?

-A high school student from Indiana

Yes, it is possible but it’s rare. Only something like 1 in 60,000 newborns are born lactose intolerant.

The most common situation for people (and most mammals) is that they are born able to digest lactose, a sugar in milk, and they lose the ability when they grow up. Pigs and people are pretty much the only mammals we know of where lots of adults can still drink milk.

When people (or babies) drink milk but cannot digest it, they are likely to have uncomfortable physical symptoms like stomach pain and bloating, gas, diarrhea, and nausea. How bad the symptoms are and how long they last for depends on the amount of lactose the person ate or drank and the amount a person can tolerate. Some people can tolerate more lactose than others.

Being born not able to drink milk and losing that ability later in life both happen because of differences in our DNA. Both are usually inherited from our parents but in different ways.

Lactose is a Sugar Found in Milk

Did you know milk has sugar? Well it does, and it’s called lactose!

Milk is made up of water (mostly) and has a small amount of lactose. Milk also has other stuff like proteins, fat, vitamins, and minerals.

Because a lot of food items contain milk, lactose is found in many different foods like ice cream, cheese, and creamy soups and sauces, just to name a few.

When we drink or eat food items that contain lactose, our body needs help breaking it down, or digesting it, into those smaller pieces. There’s a specific enzyme, or digestion tool, called lactase that does this job.

Lactose is digested by lactase- they sound similar so that’s easy to remember!

Genes Have the Instructions for Enzymes

What usually happens is that certain cells read the LCT gene and make lactase. Lactase is an enzyme that can then go on to digest lactose.

Some Babies are Born Lactose Intolerant

People who can’t digest lactose as a baby usually inherit this from their mom and dad. These babies have never been able to make lactase because of a change in the instructions of the LCT gene so that it now makes a nonworking lactase. Well, actually they have a mutation or spelling error in both copies of their LCT gene.

We have two copies of nearly every gene in our body, including LCT. We inherit one copy of the LCT gene from mom and one copy from dad.

What this means is that to be born lactose intolerant you have to get a nonworking LCT gene copy from each parent. And this can happen even if mom and dad can drink milk just fine.

As I said, babies who are born with lactose intolerance are born with mutations, or spelling mistakes, in of both copies of their LCT gene. If they have just one copy not working, they are usually OK. One is enough!

This is called an autosomal recessive condition.

The parents of someone with an autosomal recessive condition are usually carriers, meaning they each carry one copy of the gene with a mutation. They can drink milk but can pass on the nonworking copy to their child.

If both parents are carriers and both pass it on, then the baby won’t be able to digest lactose as soon as the baby is born. Each child of carrier parents has a 1 in 4 chance (or 25% chance) of being born lactose intolerant.

Because babies often rely on milk during their first few years of life, this can be a problem for those that can’t digest it! These babies can become very sick if not switched to lactose-free formula.

It’s actually the “normal” trait. When you can drink milk as an adult, you have a condition called lactase persistence.

People who can digest lactose as adults have a change in their DNA so the cells can keep on reading the LCT gene. The DNA change is not in the LCT gene however—it happens in a gene right next door to LCT, called MCM6.

The spots in the MCM6 gene that is affected is what’s called a “regulatory element.” It’s like a cross guard that directs the lactase gene and tells it to “Go” or “Stop.”

To end up with lactase persistence, you only need one copy of the LCT gene to stay on.

What this means is that you only have to get it from one parent. Someone with lactase persistence has a 50% chance to pass the copy of the MCM6 gene that says “Go!” to a baby who will then grow up to be lactose tolerant as an adult.

They also have a 50% change to pass the copy of the gene that says “stop!” and makes a child lactose intolerant later in life. Unless of course they got the “Go!” signal from the other parent!

Some Groups Are More Likely to Develop Lactose Intolerance

The form of lactose intolerance that comes with later age is most common in people of East Asian descent but also common in people from West African, Arab, Jewish, Greek, and Italian areas. 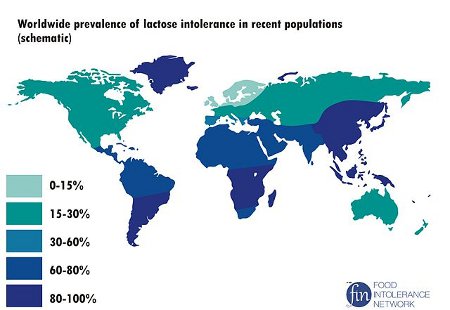 So it affects some people more than others. Why would this be the case?

Imagine growing up on a farm, where you could only eat dairy products. Would it be good or bad to be lactose intolerant?

That’s right—very bad because everything you ate would give you a stomachache!

So if a group had to live on milk and a few individuals were able to digest milk, these few would go on to have more children than their lactose intolerant brothers and sisters. Over time, most everyone would be able to drink milk.

This is why lactose intolerance is less common in groups of people who have depended on milk products for years and years. It’s adaptive for these groups to digest milk. For example, only about 5% of people of Northern European ancestry are lactose intolerant.

For other groups of people whose ancestors did not rely on milk products, there never was an advantage to being able to digest lactose. So the number of people with lactase persistence stayed low.

As you can see, lactose intolerance is more likely to happen to adults but can happen in babies. It just depends on the changes in DNA that someone inherits from their parents and also partially where their ancestors are from!