-A high school teacher from California

A lot of different colors can lurk behind someone’s brown eyes. This is true even if an eye color like blue hasn’t been seen in a family for generations. The blue eyes could still be hiding there, waiting for the right time to appear.

That right time is when both parents happen to have that particular color hiding out behind their brown. If only one parent has the right stuff to pass on blue eyes, odds are none of the kids will end up with blue eyes. But these kids could all still have blue hiding behind their brown like that parent.

This is one way that blue eyes can stay hidden for hundreds of years before making a sudden, dramatic appearance. Only one parent in each generation has blue hidden behind his or her brown. Now, generation after generation, everyone will have brown eyes and some will have those hidden blues.

The blue eyes would keep getting passed down until finally one of these “carriers of blue eyes” had children with another parent that was a carrier too. Now their children would have a chance at blue eyes.

This is almost certainly how the two of you ended up with a child with blue eyes. You and your husband both have blue and at least one of you has green eyes hiding behind your brown.

By chance, you each passed a blue to one of your children and that child ended up with blue eyes. Well, that is almost how it worked…

For something seemingly so simple, eye color is surprisingly complex. Even the simplest models of eye color that try to explain just brown, green, and blue need two genes.

If it says not to have brown eyes, then the second gene kicks in. This gene will determine whether you will have green or blue eyes.

One way to think about is with cards. Imagine the first gene is a card that is always on top of the second one.

This first gene comes in two versions, brown and clear. If you have a brown card, you can’t see the card underneath. It could be green, it could be blue…who knows?  The end result is brown eyes.

If you have the clear card, then you can see what is underneath. And it will be either blue or green. Now you have blue or green eyes depending on the underneath card. Here is what I mean: 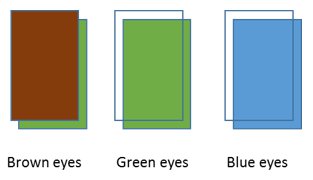 As you can see, if you have the brown card (gene), you will have brown eyes no matter what is underneath. But if you have a clear card (not-brown gene), then the second card (gene) matters.

This is a very simplified version of how blue eyes can stay hidden in a family tree. Generation after generation, at least one parent passes down a brown version of the first gene. The blue stays hidden until two people with a hidden blue happen to both pass a clear and a blue to their child. Now the child has blue eyes.

But how can a brown eyed person pass a “clear card?” It is because we have two copies of most of our genes. So instead of two cards, one for each gene, we need to think about four cards, two for each gene.

Getting back to our card example, let’s say that instead of one of each type of card, we have two. So for the first gene you could have two browns, a brown and a clear or two clears. And for the second you could have two green, a green and a blue, or two blues.

You can only get green or blue with two clear cards. When that happens, we can take a look at the cards underneath.

If there are one or two greens, you have a green pile. But if both of the first gene are clear and the second blue, then you have blue.

OK, that was a lot of cards! Here are three examples: 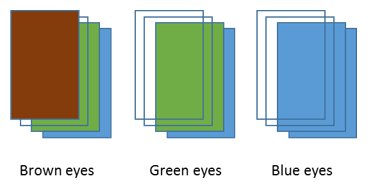 In the first, the brown trumps everything. In the second green wins out over blue and in the last, blue wins out.

Let’s use these cards now to imagine your situation. First off, you each have brown eyes so you have at least one brown. But you also had kids with green and blue eyes so we know your second card has to be the clear one. You each have one brown and one clear card.

Now we’ll explain how your three kids ended up with the eye colors they did. Before doing that we need to remember one thing. We pass on only one of each of the two pairs of cards to our kids.

So you will pass either a brown or a clear and either a blue or a green. The same goes for your spouse. Each child will get two cards for you and two from your spouse so they will have four (just like you). Here is what might have happened in terms of cards for the brown eyed child:

As you can see, both the husband and wife in this example have one of each card. In this case. The husband passed a brown and a green card and the wife a clear and a blue. The child has brown eyes but could have blue or green eyed children because of the clear card.

Here is one way that each child could end up with different colored eyes: 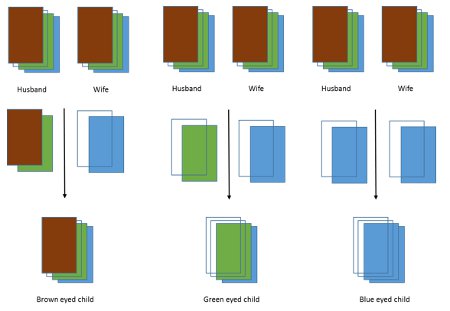 For both the green and the blue eyed child, each parent had to pass a clear card. Then the green or blue depends on whether a green got passed down or not.

Bringing It Back to Genes

Up until now I have been talking about cards but of course they are just a representation of genes. We have two eye color genes.

Here are our examples again with genes added: 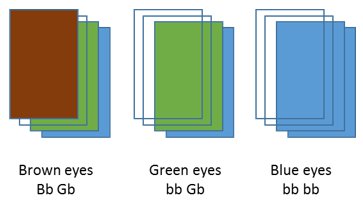 The first gene, brown or not brown, are in the first pair of letters and the second gene, green or blue, are in the second pair. So Bb Gb has one of each cards and since there is a brown, this person has brown eyes. 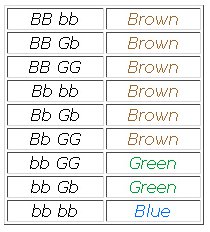 So there you have it…probably way more than you wanted! Recessive traits like blue eyes can lie dormant in the genes for hundreds of years waiting for the chance to awaken and be seen. That chance comes when two carriers come together and have children.