Can you marry a second cousin? What about a first cousin or half sibling?

— An undergraduate student from the United Arab Emirates

Whether it is legal to marry a relative can vary depending on where you live. Whether it’s acceptable or not can also depend on personal or cultural beliefs.

In some cultures, it can be looked down upon for cousins to marry cousins. Many have rules and laws against incest (close relatives marrying one another). This is rooted in genetic concerns: close relatives who marry one another are more likely to have children with diseases or other issues.

While the chance may be increased, it isn’t as high as most people think. Children of parents who are cousins or half siblings have a slightly higher (1-2%) risk of being born with a disability.

What is a cousin?

There can be many degrees and types of cousins:

Half siblings are even closer relatives – they share one parent! 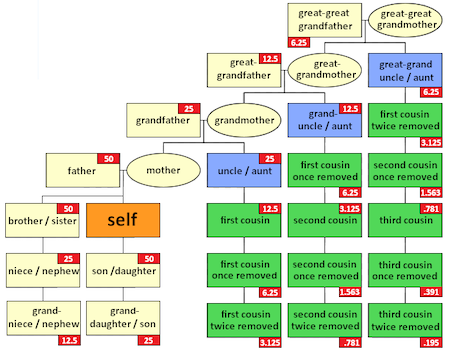 Genetic relationships between family members: Numbers indicate percentage of shared DNA between you and each relative
Image from Wikimedia

Why does marrying closer relatives increase the chance for genetic disease?

You may remember from biology class that DNA is the instructional manual that tells our body how to grow, develop, and work properly. Genes are the individual units that make up our DNA. We all have two copies of every gene: one from mom and one from dad.

Even though all humans have 99% identical DNA, there are some differences (or, variants). Some variants are responsible for physical differences, such as hair or eye color. Other variants are neutral, and don’t seem to do anything. And some DNA variants cause diseases.

Sometimes, having a variant in just one copy of a gene is enough to cause a disease. But for recessive conditions, a person will only develop a disease when they have mutation in both copies of gene. 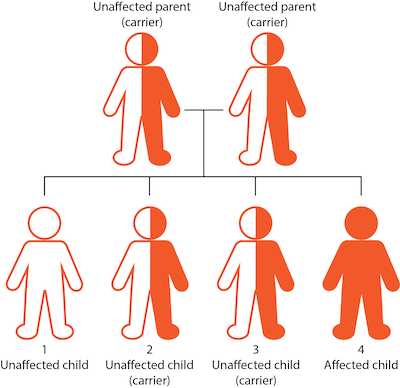 For individuals to have recessive condition, they must have two non-working copies of a gene.

We each carry about 12 genetic variants associated with recessive conditions. However, because we have two copies of every gene, there’s usually a healthy version of the genes too. That means in each of those conditions, we typically don’t have to worry about developing the disease.

But if you marry someone who has the same recessive variant as you, there is a chance your child may have the condition. That chance is 1 in 4, or 25%.

The more DNA you share with someone, the more likely it is that you have the same disease-causing variants. So if you marry someone who is closely related to you, there is a higher likelihood of having a child with a recessive condition.

According the Clinical Genetics Handbook, children of non-related couples have a 2-3% chance of being born with a birth defect, and children of first cousins have a 4-6% chance. This is not a huge chance, but it is real!

In contrast, the genetic risk associated with second cousins having children is as small as it would be for two unrelated individuals.

Why are there rules against marrying family members in some places?

In some cultures, it can be looked down upon for cousins to marry cousins. There may be rules and laws against incest, due to genetic concerns.

Some cultures, on the other hand, may encourage marriage between cousins for a variety of reasons. For example, many cultures encourage first cousin marriage to strengthen familial relationships.

In the United States, second cousins are legally allowed to marry in every state. However, marriage between first cousins is legal in only about half of the American states.

All in all, marrying your cousin or half-sibling will largely depend on the laws where you live and personal and/or cultural beliefs. Any couple worried about genetic risk to their children should meet with a genetic counselor. They can provide a more accurate risk estimate based on your situation and can discuss if there is any testing available.