How does cancer immunotherapy work?

This is a big question! Cancer immunotherapy can cover a lot of different approaches.

What I’ll focus on are those that get a patient’s immune system able to see a cancer cell for the awful thing it is. This is not easy.

Our immune system is great at dealing with bacteria and viruses. It can quickly tell that these invaders are foreign and kill them off.

Cancer is trickier for a couple of reasons. First, it came from the patient so it looks pretty much like the patient’s other cells. And our immune system is set up to avoid attacking its own body’s cells.

This makes sense as you don’t want your immune system attacking and destroying your own cells.  This is how autoimmune diseases like lupus or multiple sclerosis happen.

The other reason immune systems have trouble with cancer cells is that the cancers have found ways to hide. They add things to the outside of themselves or make things that affect how immune cells work. Either approach fools the immune system into thinking the cancer cell isn’t dangerous.

There are immunotherapies that deal with each of these (and more). Many of these treatments have proven to be very successful with very few side effects. Let’s hope scientists keep creating new therapies like these!

One way cancers get around the immune system is by making lots of something called PD-L1. When a T-cell sees PD-L1, it “knows” that the cell making it is not dangerous. They are on the same team.

One class of drugs covers up PD-L1 so the immune system can’t see it any more. Now the cancer cell is unmasked and in trouble! Here is a list of the drugs that use this approach:

Another set of drugs covers up PD-1, the part of the T-cell that “sees” the PD-L1. Now, again, the immune system can go after the cancer. Here is a list of drugs that use this approach: 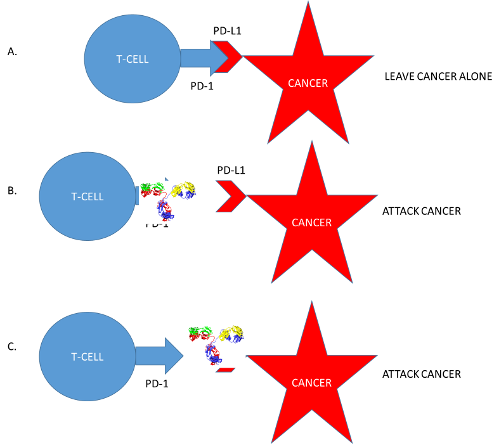 Cancers can get around the immune system by making PD-L1 (A). Antibodies that cover up PD-1 (B) or PD-L1 (C) can free up the T-cell to attack the cancer.

These new treatments are not perfect though. They can still have side effects.

This is because the PD-1/PD-L1 system is a big part of why our immune systems don’t usually attack our own cells. T-cells see PD-L1 on a patient’s cells and know to leave them alone.

So it makes sense that if you tinker with the system, your immune system might start attacking other cells besides the cancers. This is where both minor side effects like a rash or major ones like holes in your intestine can come from. (Luckily major ones are rare.)

Homing in on the Right Cells

Besides getting around cancer’s defenses, another approach is to train the immune system to go after the cancer cells. There are a couple of approaches.

One of the most exciting right now is called CAR-T or “Chimeric Antigen Receptor T” Cell Therapy. I promise to only use CAR-T from now on!

The idea here is to get the immune system to only attack the kind of cell that has gone cancerous. To do this, you need to take immune cells out of a patient, engineer them, and then put them back in.

The best example as of 9/2017 is Kymriah, a new treatment that goes after a particularly nasty blood cancer called acute lymphoblastic leukemia (ALL). The engineered immune cells that are at the core of Kymriah target B-cells, the kind of blood cells that have gone rogue in ALL. It has proven to be very successful so far.

The first step is to take out a patient’s T-cells. These are the cells that seek out and destroy the things that can make you sick like bacteria and viruses.

Scientists then get them to recognize and go after something called CD19. This is only found on the outside of B-cells, the cells gone cancerous in ALL.

Then these T-cells are put back into the patient where they get to work killing anything with a CD19. In other words, B-cells.

Sometimes the B-cells in ALL don’t make CD19 or if they do, they sometimes learn to live without it. In the first case the treatment won’t ever work and in the second, the cancer will come back and be resistant to Kymriah.

Scientists are coming up with other targets that are just found on B-cells. Perhaps these can be used if this treatment doesn’t work or if a resistant cancer comes roaring back.

And this is just one example. Another is Provenge, an engineered T-cell that goes after something made by prostate cells called PAP.

While these treatments are still more specific than the first ones we went over, they still are not cancer specific.  Kymriah goes after any B-cells, Provenge after any prostate cell. The next steps will be to go after just the B-cells or prostate cells (or whichever cells) that have the cancer.

A Truly Personalized Approach (or Worst Snowflake Ever)

Each cancer cell is like a dastardly snowflake—they are all unique. The most cutting edge immunotherapy tries to take advantage of this uniqueness to just go after the cancer cell.

Cells become cancerous because the wrong parts of their DNA get mutated. In other words, mistakes build up in the parts of the DNA that tell a cell to only grow when it is supposed to. The end result is a cell that won’t stop growing and making more copies of itself.

These kinds of mutations are called driver mutations. They drive the cell towards turning cancerous.

Sometimes a driver or a passenger mutation will change something on the outside of a cancer cell that scientists can engineer a T-cell to see. Now that engineered T-cell can kill the cancer cell. (This strategy is also called a cancer treatment vaccine.)

So the idea is similar to the CAR-T strategy. T-cells are taken out of the patient, engineered to recognize the “neo-antigen,” the cancer-specific part of the cancer not seen in any other cells, and then put back in the patient. Now they are free to attack the cancer cells!

This last approach is still in the very early stages and is more labor intensive than the other approaches. Scientists first have to find the parts of the cancer cell that are unique and this is not trivial. It is getting easier but is still not simple.

But it may prove to be the ultimate weapon against cancer. Until the next breakthrough happens and something even better comes along.

There is obviously never a good time to get cancer but now is a better time than ever before. New treatments can come on line as the old ones start to fail in a particular patient. Let’s hope science can keep up.