Could we genetically engineer catfish whiskers on a snake?

I know we have made some weird creatures with genetic engineering. Glowing kittens, Spider Goats, and all that jazz. But what about permanent physical structures? Instead of activating an old gene to do this (like the dinosaur chicken embryos), could you take like, let's say, the whiskers from a catfish and put 'em on a snake? I know it's most likely not possible because they're so unrelated, but I figured considering it's such a minute change that it might have a small chance of working.

– A middle school student from the US

Genetically engineering a snake with catfish whiskers might possible…  but it would be pretty difficult.

Even a change that looks “minute” and simple can be surprisingly complex.

Let’s go through some of the factors that determine how complicated it can get.

Traits are encoded by genes – but how many?

You can think of DNA as a cookbook, with instructions on how to build an organism. If you flip to a specific “recipe” in the book, you can find instructions for specific traits. These sections are called genes.

Some traits are fairly simple, and you only need one recipe to make them. The “glowing” trait you mentioned is actually a good example of this! Certain jellyfish have a gene that makes green fluorescent protein. All the instructions to make that green protein are in a single gene. 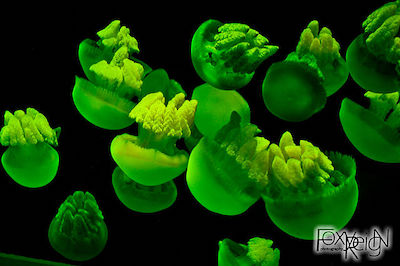 This is how scientists could make GloFish and other glowing animals. They can put that single gene into a new animal, and it just works.

But not all recipes (or traits!) are simple. Think about a recipe for a wedding cake. It might call for several flavors of cake, multiple types of frosting, different kinds of fillings, multiple layers, and more. You would need recipes for all of those different components to get a good cake out of it.

And you could break it down even more. Even an ingredient like “chocolate chips” needs to be made somewhere – can’t forget instructions for how to make those!

Before copying and pasting a trait into another organism, scientists have to figure out the genes involved. It can get a little tricky because some traits that look simple are actually influenced by many genes. Other times, a single gene can affect multiple traits.

Scientists are still uncovering relationships between genes and traits – there are lots and lots of both!

If you copy a gene from one organism and paste it into another, you get a transgenic organism (“trans-“ = across, “-genic” = genes).

As soon as scientists figured out how to copy and paste DNA, they started making transgenic organisms. There are a lot of reasons why scientists might make transgenics.

Sometimes transgenic organisms are used to for research purposes. For example, “knock out” mice are transgenic mice that have a particular gene disabled. By comparing the knock out mice to regular mice, scientists can better understand what the gene does.

Other transgenics are useful for medicine. By putting the human gene for insulin in a bacteria, it’s possible to make large amounts of this important medicine. Millions of diabetics worldwide rely on synthetic insulin from transgenics! 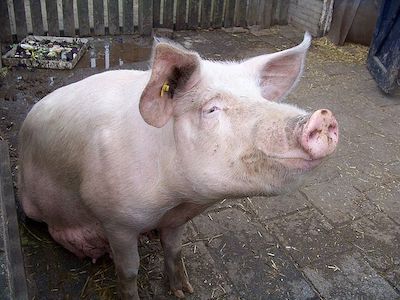 Whiskers on a snake?

Ok, but what would you need to know to put catfish whiskers (“barbels”) on a snake?

First, you’d need to figure out the genes that code for barbels. And barbels are pretty complicated!

Even though the whiskers look simple, they're actually highly specialized to help the catfish find food in murky water. They’re full of tiny taste buds; sensors that detect smells, touch, and pressure; and nerves to help carry that information back to the brain.

Right now, scientists don’t know all the genes that make these barbels – but they’re working on it!

Scientists have compared the DNA of catfish species with and without whiskers. By doing this, they identified one gene that is probably important to make barbels. But other barbel genes have yet to be discovered.

Then you’d have to figure out the genes that encode the face of a snake. You don’t want to put whiskers all over the snake’s body, or inside it.

Snake faces have lots of components. There are eyes, fangs and other teeth, maybe venom, scales, hinged jaws, holes that let them “see” heat, and more! You’d need to find a piece of snake DNA that’s related to where you want the barbels to go.

Next, you would have to copy the catfish barbel genes and paste it into the correct section about snake faces. Without messing up the instructions for the rest of the face!

Even then, results may vary. Maybe you manage to get perfect catfish barbels on the snake. But the snake might not be able to use them, because a snake brain isn’t wired to use whiskers.

Genetically modifying an organism can be tricky -- even if the changes seem small. It all depends on who, what, when, where, and why you’re trying to modify! 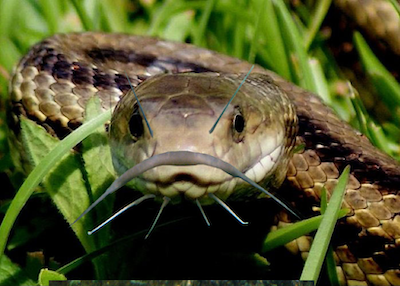