Our class is doing a project where we try to use dominant and recessive traits to figure out which celebrity we want to have kids with. Can you help me figure out how to do this with Punnett squares?

This sounds like a fun project that really dives into genetics!  And may not be as easy as it sounds.

This is where that dominant and recessive you talked about comes into play.

Before diving in and finding out what traits the kids of Blake Lively and Ryan Reynolds might have, we need to take a step back and talk about genes. And what makes them dominant or recessive.

Traits like red hair and blue eyes come from our DNA. Or more specifically, small sections of our DNA called genes. Each gene has instructions for a part of you.

So there might be a gene that tells your hair to be red. Or another that says you will have brown eyes.

Each parent gives you a copy of most every gene. This means you will end up having two copies of most genes!

People don’t all look the same because there are different versions of genes called alleles.  For example, the gene that can cause red hair comes in two versions, red and not-red.

But what happens if you get two different versions from your parents?  Say a red allele from mom and a not-red version from dad? Which version “wins”?  This is where dominant and recessive traits come in.

Ed Sheeran and You

The gene that controls whether you’ll have red hair or not is called MC1R.  As I said, there are two alleles, the dominant not-red one that we’ll call “R” and the recessive red one we’ll call “r.”

This is what geneticists typically do—they use uppercase letters for dominant alleles and lowercase for recessive ones.

As I said in the last section, both RR and Rr people almost never have red hair.  Homozygous recessive rr people will usually have red hair.

Now let’s set up a scenario.  Pretend that you are a female who does not have red hair.  Your mom has red hair, but your dad does not.

We know that since your mom has red hair, she is rr (she has two copies of the recessive red allele).  Your dad could either be Rr (heterozygous) or RR (homozygous).  We know he has at least one copy of the dominant allele since he does not have red hair.

So, what are you?  Each of your parents passes one copy of their MC1R alleles to you.  Your mom can only give an “r” and since you do not have red hair you must have gotten an “R” from your dad.

As you can see below, you are probably Rr: 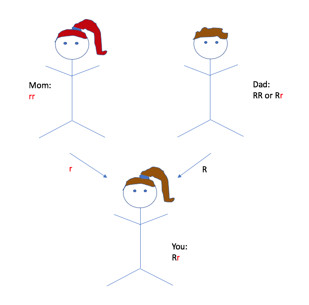 Say that you really like luscious red locks and want your child to have a higher chance of having your mom’s red hair.  Let’s pick a celebrity with red hair, say Ed Sheeran.

We know since Ed Sheeran has red hair he must have two recessive copies of the MC1R allele. In other words, he is rr.

We just determined that you carry a recessive r allele and have one dominant R allele.  You are heterozygous Rr.

Now let’s get to the fun and do a Punnett square analysis between you and Ed Sheeran to see what the chances are that you will have kids with red hair!

To set up our Punnett square, we will put your copies of MC1R on the left side of the square and Ed Sheeran’s copies on the top: 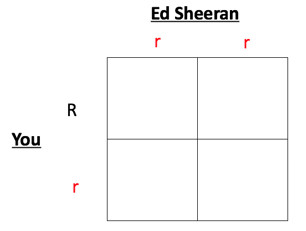 We start to fill in our Punnett square by pulling the letters from the left and the top of the squares to fill in the four boxes. Here is the first square: 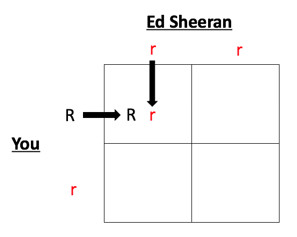 So we took the “r” from Ed and the R from you to make Rr. So one possible combination for your child is Rr like you.

Now let’s fill in the rest of the Punnett square to see the other possible combinations: 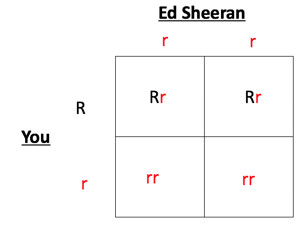 Do you need to partner with a redhead to have kids with a chance of red hair? Nope.

Let’s look at a second Punnett square where an Rr like you has a child with another Rr, say famous actress Jessica Alba (she is probably Rr as she has a child with red hair).  We are assuming you are still Rr, but now you are male: 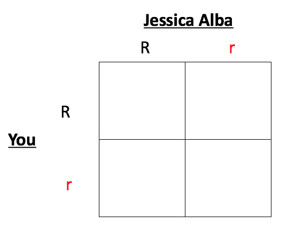 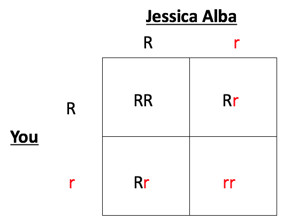 As you can see, it is not easy to get the child with the traits you want! Unless of course you are the Weasleys from Harry Potter. Since both parents are redheads, they are both rr. I’ll let you make the Punnett square to see why this means all of their kids will have red hair too.

The physical traits that we can see on different people don’t tell us the whole story of what makes them up!  They might both have a hidden red hair gene and so end up with a red haired child.

And this isn’t the only complication. It turns out that other hair colors, eye colors and many other physical traits are not nearly as simple as red hair. They have many genes all contributing to the trait. (See our previous answer here for the still too simple two-gene model for eye color.)

But for fun you can treat some of these traits as simple recessive ones. And then see what you get when you cross your traits with Taylor Swift’s blue eyes or Drake’s brown eyes.