If we make clone of a husband and a wife and then if the clones have a baby, will the baby of real parents and cloned parents be same as an identical twin!???

-An undergraduate from Bangladesh

Whoa, that sounds like a pretty complicated family! Or maybe it isn’t…

Let’s break this down to make it a little easier to understand: There’s a husband and a wife, named A and B. They have a child named C (I know, not a very creative family).

But then you clone A and B to make A’ and B’, who have exactly the same DNA as A and B. They then go on to have their own baby, C’. Here’s a little family tree to (hopefully) make it a bit clearer:

Alright, now that that’s all sorted out, onto the real question: What is the relationship between C and C’? Are they identical twins?

No, not really. Genetically, they are more like siblings.

If we think about it, the situation really isn’t any different than if A and B had a second child. And, of course, two brothers (or two sisters, or a brother and a sister) are not identical twins. They are, well, siblings.

At the DNA level, this situation is most similar to two sets of identical twins getting married and having kids (which can and does happen; click here for an example). Their children are not identical, although they are more genetically related than the usual first cousins. They are more like siblings, just like our clones’ kids would be.

These cousins are more like siblings at the DNA level because both clones and identical twins have identical DNA. And so it really is like the same two parents having multiple children.

This means that, on average, these cousins will share half of their DNA instead of the usual 1/8th. They are definitely way more related than the usual first cousins! But they are not identical twins and so do not share 100% of their DNA.

DNA Gets “Mixed and Matched” Before You’re Even Born

The parents also each have 2 copies of the genome – one from each of their parents. But how does the body decide which copy to pass on to the next generation?

It wouldn’t be fair if you only got, say, your grandfather’s genes from your mother and none of your grandmother’s. Thankfully, that’s not what happens (which you may have suspected if you look like all four of your grandparents).

What happens instead is that when your body creates egg or sperm cells, it gives your child half of a reshuffled version of both of your genome copies. So it’s still only half, but it’s different from either of the halves you got from your parents. It’s a totally new combination. 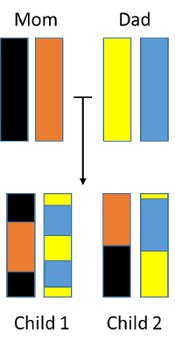 In this picture, mom has a black genome and an orange genome and dad has a yellow and a blue one. Before mom passes on her DNA, the black and the orange swap DNA, giving a new genome that is a combination of the two. The same thing happens for dad.

Each of these children got half their DNA from mom and half from dad. But they did not get the same halves.

Here is what it would look like for cloned parents: 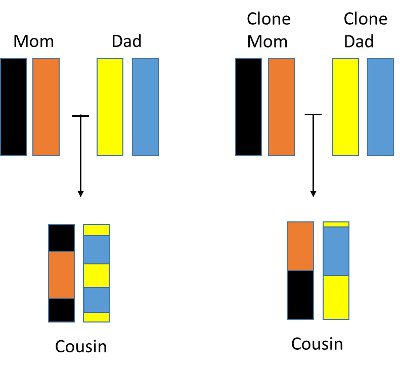 As you can see, it is the same as if the same two parents had two different kids. These cousins share half of their DNA like siblings do.

The shuffling of DNA when the egg or sperm is made is called chromosomal crossover. It happens during a process called meiosis, which is a special type of cell division to make sperm and eggs (see links below for more information).

The exact way the chromosomes are reshuffled during this process is random. That means that each sperm or egg has a unique, never before seen set of DNA! It’s therefore very unlikely that two egg cells or two sperm cells from the same parent have the exact same genome.

To bring this back to the original question, that means that two children born to the same parents (or clones of the same parents) will not have the same genome. On average they will share 50% instead. (Click here for why it is on average instead of exactly.)

DNA is Not Everything

Let’s go back to the cloning part for a bit. Earlier, I said that A and B are exactly like their clones, A’ and B’. But is that strictly true? Yes, they have the same DNA, but it turns out that genetics is not as straightforward as that.

Which, of course, if you’ve ever met identical twins, you already kind of know. They do look an awful lot alike, but not exactly. There are differences that you can see once you look for them.

Not all the information that determines what a person looks like is contained in the sequence of letters of the genome. It turns out that those letters can have modifications added to them, kind of like trail markers.

Those modifications can change how the instructions are used. This is called epigenetics.

The modifications are often caused by things that happen to us, and can cause two people with identical genomes to not be exactly alike. In fact, if the environments are different enough, clones might be very different indeed. (Check out the TV show Orphan Black for a great representation of how people with the same genome can end up very different.)

Scientists call a marked up set of DNA the epigenome. People that have the exact same genome – the same letters in the same order – can have different epigenomes, and therefore look and be different.

So A and A’, or B and B’, might not look or be totally identical after all! And since these modifications can actually be passed down to children, C and C’ might look more different than you might think. Cloning is complicated!

Of course, even without epigenomics, C and C’ would still be as different as any siblings. They would share only 50% of their DNA, not 100%.

Now, whether you should refer to C and C’ in daily life as siblings or cousins or something else entirely (“clonesins”?) is a question I can’t answer for you. Though I do suggest naming them something better than C and C’. Happy cloning!