Twins
Back to Twins 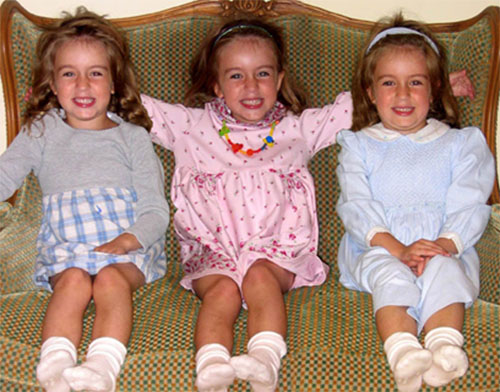 Having children who look the same, like these identical triplets, would be pretty cool! But this doesn’t happen very often. (Wikimedia Commons)

The chances of the two of you having children that look identical are slim. Identical twins happen once every 250 births, and identical triplets are even less common, happening about  20-30 times per one million births.

These chances do not change just because you and your husband are identical twins. That’s because being an identical twin is not a trait that runs in families. It’s actually a random event that happens early on during pregnancy.

What determines how your children will look, and why identical children look the same? You’ll see that it has to do with an important molecule called DNA.

DNA is the information that makes you who you are. It is found in the cells of our bodies, the building blocks for our different body parts. DNA in skin cells makes sure our skin works properly, DNA in hair cells gives us our hair color, and so on.

This is why babies usually look a bit like mom and dad. They get half of mom’s and half of dad’s instructions.

Sometimes, however, something weird happens. After the fertilized egg has divided a few times to become many cells, the clump of cells can randomly split into two, three, or even four embryos that share the same DNA! This results in identical twins, triplets, and quadruplets – children who have the same DNA and thus look alike.

Scientists are still completely puzzled about why this splitting happens. So far there’s no evidence that some people have anything in their DNA that makes their embryos more likely to split.  For now, identical children are thought to happen by chance.

All DNA Are Not Created Equal

But you certainly don’t have to be an identical twin in order to feel unique. We all inherit a unique combination of features from our parents. And this has to do with how DNA is passed down.

As I mentioned earlier, sperm and egg cells have 23 chromosomes, instead of the usual 46. This happens through a process called meiosis.

Here I drew just one pair of chromosomes as bars, yellow for you and blue for your husband. You start out with a cell (a) that makes a copy of its chromosome pair (b). The cell then divides (c) and divides again (d) making four cells, each with one chromosome from the original pair.

If chromosomes really looked and got passed down this way, your children would all look alike because there is only one possible combination of chromosomes they could get. No matter which sperm combined with which egg, they’d only get the blue and yellow combination. So why doesn’t this happen in real life?

Here I colored the two chromosomes in each pair different colors to set them apart. You now have a yellow and a purple and your husband has a blue and a green.

It might seem confusing that the chromosomes in each pair are slightly different, but it’s this diversity that makes each of us unique. What ends up happening is that each of your features is encoded by two different instructions, which may add to each other or compete with each other. One example is eye color.

And of course this same thing is happening with all 23 pairs of chromosomes. This already makes the odds of two siblings ending up with the same set of chromosomes 2 to the 23rd power, or about 1 in 8 million. But the odds are even worse than that!

DNA also gets mixed before it gets passed down in a process called recombination. That is, after the chromosomes are copied and before the cell divides, the four chromosomes can exchange pieces like so:

Also, I only show one possible exchange of DNA here, but a different exchange will happen the next time a cell goes through meiosis to make germ cells. Women are thought to be able to make 400 eggs, and men make tens of millions of sperm cells a day! This means the combinations of DNA for your children are endless.

This is why it’s so unlikely that two siblings who aren’t identical twins will look exactly alike. Pretty neat, considering they come from the same set of starting DNA!