So what happens when a chimera has children? If let's say the ovaries or testes are made up of cells from both fraternal twins, is it possible that the sperm or eggs to be made up from both twins thus making the children chimera by default?

-A high school student from Denmark

No, the children of chimeras are not automatically chimeras themselves. In fact, they aren’t any more likely than anyone else to have kids with chimerism.

This is because each sperm or egg will have DNA from only one of the “twins” that makes up a chimera. The DNA from both twins does not mix in a single sperm or egg cell.

There are two sets of cells in a chimera, each set with their own DNA. And only one sperm fuses with one egg.

So, the child will get DNA from one “twin” or the other, and not both. They will not be chimeras unless their chimerism happens the same way as it does for everyone else.

A Chimera is Fused Fraternal Twins

In Greek mythology a chimera is a fire-breathing hybrid monster: a lion with a goat’s head protruding from its back and a snake for a tail. While real-life chimeras aren’t quite as cool as this, they are still a mix of two different people.

Here I’ve colored each of the fraternal twins a different color (blue & red). So during the same cycle, two of mom’s eggs are fertilized by two different sperm. 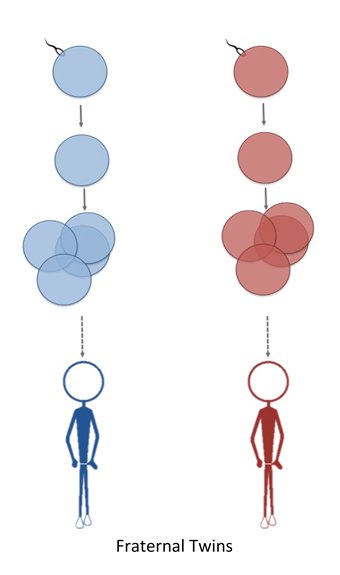 Things go a little differently with chimeras. Instead of growing up as two separate people, you end up with one person with both sets of cells. Here is what that looks like:

The two clumps of cells that would have gone on to being separate twins fuse into a single clump. This clump then goes on to become a single person.

So what is essentially happening is two siblings are fusing together to become one person. Or to put in another way, you have a person who has some cells from one sibling and the rest from the second.

Whereas mixing blue and red paint makes purple paint, this is not the case with a chimera’s cells.  There are some blue cells and some red ones. And fusing the two does not make a clump of purple—each cell has DNA from its original fertilized egg (blue or red).

The fusion happens early enough that there isn’t a problem with being conjoined or having extra limbs, though.  A chimera is simply a single person made up of cells from two siblings.

Sometimes you can tell people (and animals) are chimeras based on their mixed features: they have two distinctly colored eyes, hair, or skin. But sometimes there are no clues at all until they have a genetic test done.

Chimeras Aren’t More Likely to Have Kids with Chimerism

Even when the ovaries or testes of a chimera are made up of cells from both “twins,” their sperm or egg cells will only get DNA from one “twin” or the other. This is due to a process called meiosis.

The way this process works in men is that a single cell eventually goes on to become four sperm cells. All of the sperm have DNA from the original cell…there is no mixing with other cells:

If the father was a chimera, and produced sperm from both his original and his “twin’s’’ testes cells, only one of the sperm would fuse with the mother’s egg to produce a baby: 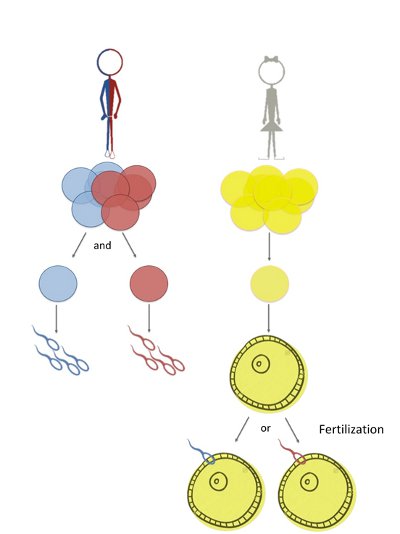 The same is true if the mother were a chimera.  Only one of her egg cells (either her original or her “twin’s” egg cell) would fuse with dad’s sperm, and both would produce a genetically normal child.

In the extremely rare case that a chimera’s baby was also produced by the fusing of two fraternal twins early in development, then their child could potentially also be a chimera. However, this rare possibility is not any more likely for a parent who is a chimera.