– A curious adult from the US

Blood type is one of the key examples of genetic inheritance that we learn about in school. And in the vast majority of cases, blood type follows the rules of inheritance.

(Check out this post for more on the basics of the blood type inheritance!)

But as with all rules, there are sometimes exceptions! Cis-AB is one of them.

Cis-AB is a rare fourth version of the blood type gene. It is an allele that gives you type AB blood all by itself! If you have the cis-AB allele, the other allele you got from your parents will not affect your blood type. No matter what it is, you will have type AB blood.

It is worth noting that the cis-AB allele is very rare. While it has been observed worldwide, it is most prevalent in Korean and Japanese populations. Even then, it reaches a frequency of only 0.035% in Korea and 0.0012% in Japan.

Seoul has a population of 10 million people. We expect only 3,500 people in Seoul will have the cis-AB allele. If you packed them all together in one spot, you could fit them comfortably into a typical convention hall. Tokyo has a population of 9 million people. Only about 100 people in Tokyo will have the cis-AB allele. You could probably fit all of them into a large coffee shop.

The cis-AB allele can lead to some unusual patterns of inheritance for blood type. Let’s take a closer look at the genetics of the cis-AB allele to see how that happens.

The allele for type O blood is recessive. This means that if you have type O blood, both of your copies of the gene must be the type O version. You got one each from mom and from dad.

The A and B blood types are both dominant to the O blood type. This means the A and B versions of the genes take control in determining your blood type. If you get one copy of the A allele and your other copy of the gene is the type O version, you will have type A blood. The same thing goes for the B allele.

In the chart below, I’ve shown all of these combinations. I’ve placed the genotype (a person’s combination of alleles) in the top left of each box, while blood type is written in the center. 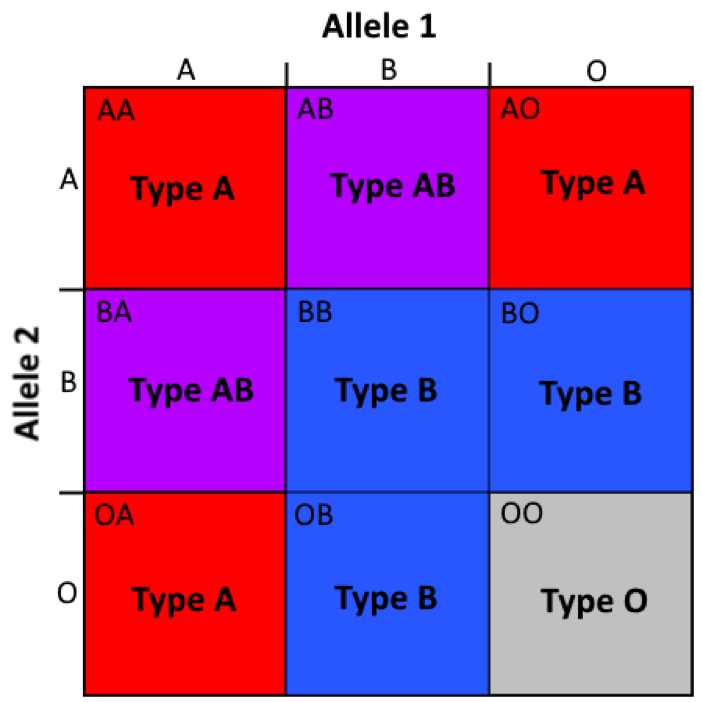 Now let’s add the cis-AB allele into the mix. For the purposes of what you would see in a blood test, cis-AB is dominant to the other three alleles. If one of your copies of the blood type gene is cis-AB, your second copy can be the A version, B version, or O version, and you will still have type AB blood. 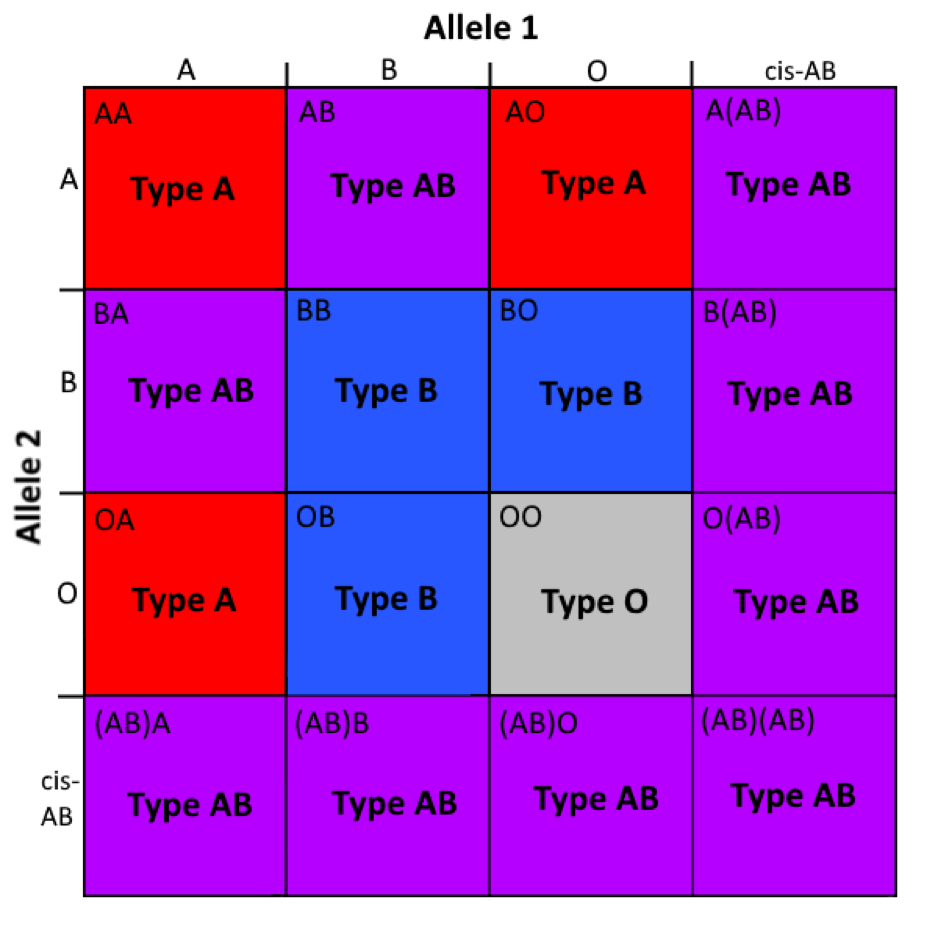 So imagine we have two people with type AB blood. One has it in the typical way: a copy each of the A and B alleles. The other has it from a cis-AB allele. Is there any difference between these two people?

In terms of their blood type and ability to donate or receive blood, there is no difference. However, there is a significant difference in what the blood types of their children might look like.

Let’s imagine that a person with type AB blood has children with a person of type O blood. Under normal inheritance patterns, the person with type AB blood will have one A allele and one B allele. They will give either allele to their children, who will receive a copy of the O blood type gene from the second parent. These children will all have either type A or type B blood.

But under rare circumstances, the person with type AB blood might have the cis-AB allele. Let’s imagine their other allele is the O version of the gene. If so, they will give either the cis-AB allele or the O allele to their children. Their children will then get an O allele from the second parent. As a result, the children will be either be type AB or type O. Neither of these outcomes were possible under the normal patterns of inheritance!

Did you learn about Punnett squares in school? Geneticists use these to show what possible blood types any pair of parents might give to their children. Below, I’ve shown the Punnett squares for the sets of parents I just mentioned.

Cis-AB can also make it possible for a parent with Type A blood and a parent with Type AB blood to have a child with Type O blood. To see how, let’s make another Punnett square. This time, one parent has an A allele and an O allele. The other parent has the cis-AB allele and an O allele. A quarter of the time, their child will inherit both O alleles and have type O blood. The same result can occur when one Parent has type B blood and the other has type AB blood with the cis-AB allele.

The genetics of blood type are more complicated than what we were taught in school. Cis-AB isn’t the only atypical way to get AB blood -- this is also possible with blood chimeras. And O blood type can also show up when we don’t expect it if one parent has the Bombay blood group. To learn about what is going with blood type at the molecular level, click here.