I have learned about codominance, but are there some codominant traits in humans?  For example, do some humans have one blue eye and one green eye, or are these traits just incomplete dominance?

-A middle school student from Colorado

There are definitely codominant traits in people.  But having two different colored eyes is not one of them.  This heterochromia happens for different reasons (click here to learn more).

You are right that codominance happens when two traits are both visible at the same time.  The classic example that we’ll go over in more detail is the AB blood type.  People with this blood type have A and B proteins at the same time.

There are other examples as well, including blood cell shape in sickle cell disease. So codominance definitely happens in people!

What I thought I’d do for the rest of the answer is talk about what is actually happening in the cell with codominance.  As you’ll see it has to do with what a gene actually does.

Your DNA has the instructions for making you. In a way, it’s a lot like a recipe book with all the instructions that tell each of your cells what to do and when to do it. There is a set of recipes to be a muscle, a different set to make skin, a third set to carry a nerve signal and so on.

You have two copies of most genes, one from mom and one from dad. These genes can come in different versions, called alleles.

Like most of the rest of our genes, everyone has two copies of the ABO gene, one from each parent. This gene comes in three different alleles: A, B, and O.

Since every person has two copies of this gene, someone could have an A and a B, a B and an O, two B’s, etc. Here are the six ways these three alleles can be combined, and what each person’s blood type would be: 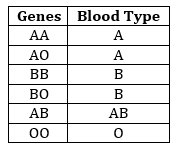 As you can see, even though there are six combinations, there are only four possible blood types. This has to do with how the different versions of the gene interact with each other to make a blood type.

When we look at a cookbook to make a dish, we don’t eat the paper recipe. We take the instructions, gather the ingredients and create that tasty burrito.

Like recipes, genes can’t really do anything as a piece of DNA. A cell needs to read the gene and make proteins that can go out and do something in a cell. So it is the proteins (whose instructions are in genes) that cause the traits we see.

The ABO gene makes a protein that sits on the outside of our red blood cells, like decorations. The A allele makes a version of the protein that is slightly different from the B version.

This is why BB and BO people both have a B blood type. The blood test looks for the A and B protein and only finds the B in both the BB and the BO cases.

One thing to keep in mind is that dominance is only important in how it affects the trait. Terms like recessive, dominant, codominant, and incomplete dominance all refer to the trait (phenotype), not the set of genes we have (genotype).

The sickle cell version of the hemoglobin gene is a great example of this idea. As you can see below, depending on what trait we look at, the same allele can be dominant, recessive, or codominant:

Sickle cell anemia is a disease where red blood cells become thin and elongated. If a person has one copy of the sickle cell allele, half of their red blood cells will be misshapen. In this way, the allele is codominant, since both normal and sickled shapes are seen in the blood.

But the allele can sometimes look recessive too. The misshapen cells caused by the sickle cell allele are not able to carry oxygen as efficiently which can cause anemia. However, if the person only has one sickle allele, they are able to get enough oxygen from the normal shaped blood cells. Only people with two copies of the sickle allele get anemia, making this trait recessive.

Finally, having the sickle shaped cells increases malaria resistance (read more about how here). Since only one copy of the allele is needed to give resistance, this trait is dominant.

As you can tell, dominant, recessive and codominance can be a bit complicated.  But however complicated, one thing is for sure—there are definitely codominant traits in people.