I know that crossing over can happen along chromosomes, but can crossing over happen inside genes themselves? It seems from what I have read that it can’t.

-A graduate student from Arizona

The quick answer is that yes, it can. And it is one of the ways that the seemingly impossible in genetics does sometimes happen.

Let’s use hair color as an example. You may remember the Weasleys from Harry Potter. Both parents and all their kids had red hair which makes perfect sense genetically.

Now imagine they have another child but he doesn’t have red hair. Time to interrogate the mailman? Not necessarily.

One way they might have a child without red hair is through crossing over within the gene responsible for red hair. Even though we learned in school that two redheads could only have kids with red hair …

DNA is the genetic information that gives your body the instructions to make you.  You are unique because you have unique DNA (and unique experiences).

Genes are an important part of your DNA.  A gene is a stretch of DNA with the instructions for one small part of you.

There is a gene that lets you tell red from green, another that might keep you from having brown eyes and one that decides whether or not you’ll have red hair. Of course this list is incomplete—your DNA (and everyone else’s) has tens of thousands of genes!

DNA is wound up really tightly and packaged in long stretches called chromosomes.  You can think of these like instruction books.

This is just one of four combinations, though. The child could have gotten the light green from his father and/or the light purple from his mother. The chances of any combination are equal.

But things aren’t that simple! Chromosomes are almost never passed down whole like in this picture. Instead, before we pass them on to our children the chromosomes swap DNA with each other. This is called crossing over (or recombination).

In reality, this is probably what we are more likely to see: 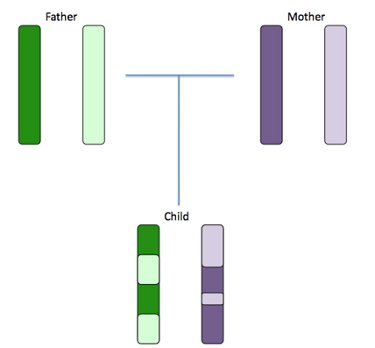 Instead of getting all dark green or light green from dad, the child gets a mixture of the two. This is the same for the chromosomes from his mom.

Keep in mind, though, this is just one of the many possible combinations of light and dark green and purple.  Crossing over can happen at any place in a chromosome leading to infinite color combinations! It can even happen within genes.

Crossing over is really common too. It pretty much happens every time a sperm or egg is made.

Crossing Over Within Genes

What this also means is that DNA swapping can sometimes happen within genes. Usually this isn’t a big deal but sometimes it can lead to some very interesting results.

Let’s bring back the Weasleys as an example to show how the supposedly impossible can become possible because of crossing over. Remember, the Weasleys are a family from Harry Potter where everyone, parents and children, have red hair.

There is a gene called MC1R that is the key player in giving people red hair. There are two types of versions (or alleles) of this gene. One version can cause red hair and the other won’t. We will call the red version red and the not-red version not-red. 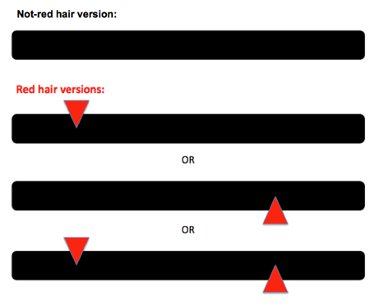 Now of course a real gene is a long stretch of A’s, G’s, C’s and T’s. To make things simpler, we are representing the gene as a black rectangle. Changes in the letters of the gene that turn the not-red version into the red version are shown with red triangles.

These changes are really small differences in the DNA (often referred to as SNPs). A G changed to a C or some other little change (click here for an example of one of those little triangles).

The first red version here has a triangle (or DNA difference) at one end of the gene and the second version has one at the other end. The third version has two triangles, one at each end.

But like I said, people have two copies of this gene. In order to have red hair, you usually need to have two “red hair versions” of the gene (this is why red hair is recessive). If someone had at least one “not-red hair” copy, they usually don’t have red hair.

So for this example, we know Arthur and Molly Weasley have red hair, so let’s say this is what their two copies look like:

Now, whenever Arthur and Molly go on to have children, they pass on one copy of each gene.  For instance, let’s show what would happen when they pass their genes to Ron.  That cross might look like this: 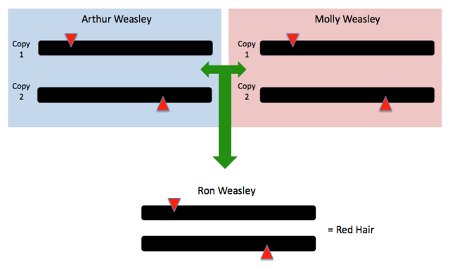 But what if they had another child and that child had black hair? Do they need to blame the mailman or is there another possibility?

They might have a child with black hair through crossing over. Crossing over is when the two gene copies get mixed up to form new, different copies. Let’s say that this crossing over happened in Molly Weasley. That might look like this: 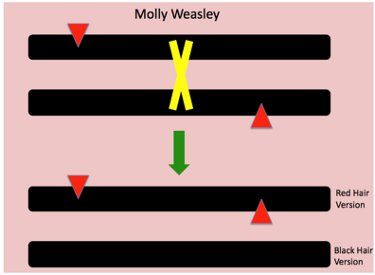 When Molly is passing her genes on to the next child, let’s call him Bob, there’s a chance for Bob to get the not-red hair version like this: 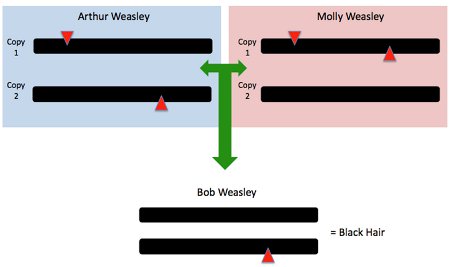 Now as you can see, Bob has a not-red version and a red version. He does not have red hair (and happened to end up with black hair). It is possible through crossing over for the Weasleys to have a black-haired child.

So, crossing over can happen within genes themselves. This can even lead to different traits than you would expect in children.