-A curious adult from Oklahoma

It is a very specific way of saying that his person has a different gene from somebody else.

What it doesn’t tell us is which gene is affected. It also does not tell us if the difference has any effect on the person.

What it specifically means is that at position 113 of a protein (p.), there is an asparagine (Asn) instead of an aspartic acid (Asp). This is probably not very helpful yet!

To really understand what that means, we need to take a step back and look at genes, and the proteins that come from them.

Genes Have the Instructions for Proteins

Our genes are like a set of instructions that tell our bodies how to grow and develop. Each gene has the instructions for one small part of you.

For example, there is a gene that tells your hair whether it will be red or not. And another that lets you digest the sugar in milk. And so on over the 22,000 or so genes that make you, you.

This may make it sound like genes do these things. They don’t.

Instead, genes are instructions that tell our bodies how to make proteins. It is kind of like when you are making a structure out of Legos.

If you have red hair, that is because the protein the gene codes for causes you to have red hair. The gene itself does not turn your hair red any more than the instructions for the Lego spaceship build you a spaceship.

How does this happen?

Well, genes get read and “translated” into proteins. Proteins are just a long sting of a certain kind of chemical called amino acids.

There are many different types of amino acids. Each protein has a specific set of these amino acids lined up in a certain way.

Genes tell your body how to put amino acids together in order to make a protein. Scientists have been able to figure out the genetic code, which helps to explain how genes lead to proteins.

These four letters are repeated many times and in different combinations in order to make up a gene. They form the “alphabet” of our instructions.

When your body reads a gene, it reads the nucleic acid letters in groups of three. These are the “words” in our genetic language (called codons). There are 64 possible “words” with 4 “letters.”

Each codon tells your body to put a different amino acid in the protein. Once the first amino acid is put in, the second set of three letters is read to add another amino acid and so on. This process keeps going until the entire gene is read and the whole protein is made.

Let’s look at an example. We have the following letters that make up the beginning of a gene:

So first, we need to break this up into groups of three:

Now we know each codon in the sequence. Our next step is to find out which amino acid is made by each codon. Luckily, geneticists have figured this out for us and we can look this up. You can look at the chart at the end of this answer to see how I figured this out.

So now we know that the order of the amino acids. We use 3 letter abbreviations instead of writing out the full name of each amino acid.

The amino acid methionine (Met) almost always starts a protein. There are 3 codons that tell the protein that it is done being made. This is shown by the word stop.

One other thing that you need to know is that while the genetic code has 64 possible combinations, there are only 20 amino acids. This means that some amino acids can be added by more than one codon.

Consider the sentence “I gave the dog a bone which made her really happy.” If we change the word “happy” to “glad” the meaning of the sentence does not change.

Asp stands for aspartic acid. Because Asp comes before 113, we know that in this gene, the three letters that make up this codon should lead to the amino acid Asp being added to the protein.

Looking at the codons that lead to different amino acids being added to a protein, I have found that Asp can be added by GAT or GAC. Asn can be added to a gene AAT or AAC.

What most likely happened here was that the first G in either GAT or GAC was changed to an A. Now we have AAT or AAC. This one letter change means that a cell now puts Asn at position 113 instead of Asp.

A change like this might cause problems, be beneficial or have no effect. It depends whether or not that part of the protein can tolerate such a change.

To understand how this can happen, let’s think of a gene like a set of instructions to make a meal. Sometimes, if there is a mistake in the instructions, then the dish will turn out drastically different than it is supposed to. Other times, a mistake might not have an effect on the dish at all.

For instance, let’s say you are making a cookies and you should be using 1 tbsp. of sugar. If the instructions have a typo and say add one tsp. of sugar, then your cookies might not be sweet enough, and they will not taste as good.

Unfortunately, for this example I can’t tell you what kind of effect p.Asp113Asn will have. This is because I do not know the gene where this change happened, so I cannot tell you whether or not the protein made by this gene would not work like it should because of this change. 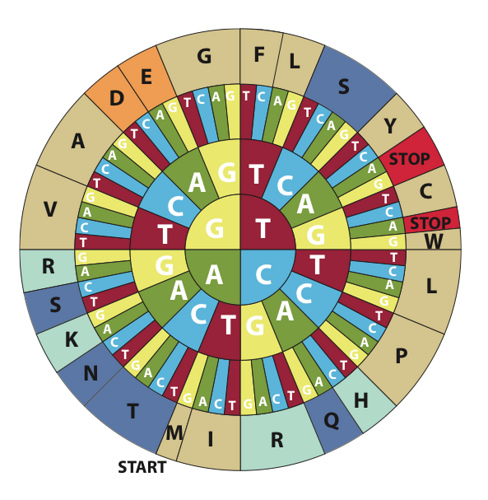 This chart allows us to see what amino acid is added to a protein. Look at this chart as if it were a dartboard. Let’s say you have the sequence GCT. You first want to look for the G in the bull’s eye which is in yellow. Then you want to look at blue C that is in the second rung of the dart board and is touch the original G in the middle. Then you want to look for the red T that is in the next rung and is connected to the blue C we just looked at in the second rung. That red T is under touching A in the outer rung. “A” is an even shorter abbreviation for Ala, or alanine (click here to see the list of abbreviated amino acids). Therefore, you now know that GCT will add an alanine to a protein.