-An undergraduate from the UK

This is a great question! From a first pass we would conclude that blue eyes and blonde hair are recessive.  Unfortunately we’d be wrong about the blonde hair (and only partly right about eye color).

As I said, though, we’d be wrong.  It turns out that eye color and most hair colors are way too complicated to be simple dominant/recessive traits.

Surprisingly, blue-eyed parents sometimes have a brown-eyed child.  Now this isn’t that common so we could still say that blue eyes are mostly recessive.  The same isn’t really true for blonde hair.  Blonde parents often have darker haired children (or even redheads).

This is why you can’t just look at a single family to figure this stuff out.  You need to look at lots and lots of families and lots and lots of kids.  Only then do you have a chance at figuring out if a trait is dominant or recessive.

For example, imagine that in our case both kids had brown eyes.  We might conclude that brown eyes are recessive because all the parents and kids had the same eye color.   But this is not at all correct.  If you only look at one example you can miss the right answer!

In fact this is where the wrong ideas about attached ear lobes, rolling your tongue and lots of other supposedly simple dominant and recessive traits came from.  Scientists jumped to the wrong conclusion from studying too few families.

One of the big reasons why blonde hair and blue eyes (and all those other traits) fail as true recessives is that they are not due to a single gene.  And truly recessive traits almost always involve a single gene.

Of course just because a single gene is involved doesn’t mean you’ll for sure have a clear dominant or recessive pattern. The ABO blood type is a great example of this.

For the rest of the answer I want to focus on why dominant and recessive traits follow the patterns I’ve described.  And why being due to more than one gene can disrupt the whole thing.

As I mentioned it would be pretty easy to answer this question if blonde hair and blue eyes were due to a single gene.  Let’s see why.

For this, we’ll focus on a dominant trait that really is due to a single gene—the ability to taste Phenylthiocarbamide or PTC.  PTC is a bitter tasting chemical similar to one found in broccoli and brussel sprouts that three out of every four people can taste.

There are two versions of the gene that determines if you can taste PTC—T and t.  The T version lets you taste PTC and the t version does not.

Another name for these two different versions of the same gene are alleles.  Whether or not a person can taste PTC depends on which alleles of the gene they have.

If this is all there was then it would be very hard to see why tasters even had nontasters.  To understand that, we need to know that people have two copies of each gene. They get one copy from their mom and one from their dad.

However, if a person gets one copy of the T allele, and one of the t allele, it turns out they can still taste PTC.  This means that tasting PTC (the T allele) is dominant because if you get a single copy from either parent you show that version of the trait. In other words, these carriers can taste PTC.

Now we are almost ready to explain why nontaster parents rarely have a taster child and why taster parents sometimes have a child that can’t taste PTC.  The last piece of the puzzle we need is that each parent passes just one of their alleles to his or her child.  And that allele is chosen at random.

Now we are ready to see where the patterns come from.  We’ll do this by looking at three different scenarios.

First off, you can see that both parents are tt.  This is the definition of a nontaster.

Remember each child will get one allele from mom and one from dad.  Since the parents can only pass a t, all the kids are guaranteed to be tt.  None of them will be able to taste PTC.  This is why parents with a recessive trait have children with recessive traits too*.

Now let’s look at two tasters who happen to be TT:

Again, they only have one allele they can pass down…in this case a T.    This means all their kids will be TT and so will be able to taste PTC.

Finally, let’s look at two tasters that carry a hidden nontaster allele.  As you can see, both parents are Tt: 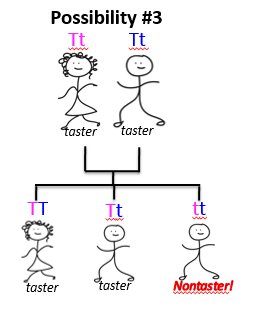 In this case, if both mom and dad happen to pass their t to their child, then the child will be tt.  That child will not be able to taste PTC.

But of course these parents don’t have to have a child that can’t taste PTC.  In fact, each child only has a 25% chance of ending up a nontaster.  This is why we have to look at lots and lots of families to figure out if a trait is recessive or dominant.

In one family, taster parents may have all taster kids even if the parents were carriers.  This would make being a taster look like a recessive trait even though it isn’t.  Again we see the importance of looking at lots and lots of families.

We won’t have time to go into it here, but if there are multiple genes involved, these patterns can break down pretty quickly.  Click here for an example of this with eye color and here for one with blood type.

When we look at lots of families for eye color, we see a pattern that sort of looks like blue eyes are recessive and brown are dominant.  But we also see the more than occasional blue eyed parents having a brown eyed child.  And we aren’t even throwing in green and hazel and everything else!

Hair color is an even bigger mess.  If we look at enough families, we tend to see lots of blending.  A dark haired parent and a light haired parent will often have a child with a color in between.  Black + Blonde = Brown!

So all in all the answer to your question is neither!  Blonde hair, brown hair, blue eye, browns eyes …none of those traits are dominant or recessive as they are not due to a single gene.  Which in a lot of ways is a good thing because multi-gene traits allow for all of the wonderful variation we see around us!