Developmental plasticity in evolution - would you please explain it. And how does it differ from DNA methylation?

-A graduate student from Australia

Developmental plasticity is just another way of saying that the environment plays a big role in our traits too. We are more than just our genes.

One way the environment can affect our traits is by changing how our cells use our DNA. So in one condition a gene may be turned way up and in another it might even be off.

These kinds of changes are called epigenetic. Basically, the DNA is changed in a way that is not always passed on to the next generation.

Now you might be wondering what any of this has to do with evolution. After all, evolution is usually thought of as heritable changes that are passed on. Epigenetic changes are not (usually) inherited.

But plasticity is actually very important in evolution. By letting individuals survive, it gives the species a chance to hit upon a new mutation that lets the whole species survive. You need to be alive to evolve!

Developmental plasticity is incredibly important. Genes are not your fate. Your environment plays a huge role as well!

Think about someone who spends a lot of time exercising. This person will have bigger and stronger muscles than someone who does not exercise. This is because our muscle size is not set in our DNA. Instead, the environment (how much you exercise) is very important.

This is also why we can move to different places in the world. If people had no ability to adapt to different environments, no one could live in Denver, or climb mountains. Because of plasticity, we are able to eventually adjust to a lower oxygen level and be just fine.

One example of this is height in humans. Height is influenced by both genetics and nutrition. If a child does not get enough food, she will be shorter than she might otherwise have been. Since people stop growing while they are teenagers, this is permanent.

But if the underfed, short person’s own children get enough to eat, they will grow up taller. The nutrition-caused shortness of the parent is not passed on to the children.

A Butterfly that can Change its Wing Color

Another cool example of developmental plasticity is the “squinting bush brown butterfly” (Bicyclus anynana), from eastern Africa. It is actually able to vary its wing color depending on the season!

Why does it do this? Why is this beneficial?

It turns out that in the dry season there are lots of dead leaves everywhere. So the butterfly uses its brown wings to look like a dead leaf and hide.

But in the wet season, everything is green. The butterfly stands out against the leaves and can be seen by predators.

In a wet environment, it is better to have large spots on its wings. These spots confuse predators. Instead of biting a butterfly’s body (which would probably kill the butterfly), they are likely to bite at the wings.

These butterflies pull this off based on temperature. If the butterfly grows up in a warm temperature, it will be entirely brown. It will be spotted if it grows up when it is cool.

So how is plasticity related to evolution? Essentially, developmental plasticity allows an organism to survive in an unusual, possibly stressful environment. And as long as it can survive for a few generations, it is possible for mutations to happen that will make the animal more fit.

Let’s consider a hypothetical example using butterflies like the ones I mentioned earlier. Remember, these butterflies can be entirely brown in the dry season, or have spots in the wet season. Each of these patterns is best in only one environment.

So now think about a group of these butterflies that lives in an entirely dry/warm environment. All the butterflies will be brown all the time.

Suddenly, some butterflies get moved to a new place that is always wet and green. Luckily, they can survive because they can make spots on their wings when it is cool.

At this point you might be asking, OK who needs evolution anyway? Plasticity is doing just fine.

But there’s a catch. This new mutation also makes it so the butterfly will develop spots no matter what conditions it is in. Essentially, the plasticity is lost. The spots are now permanent. Even if a dry season happens, the butterflies will have spots. 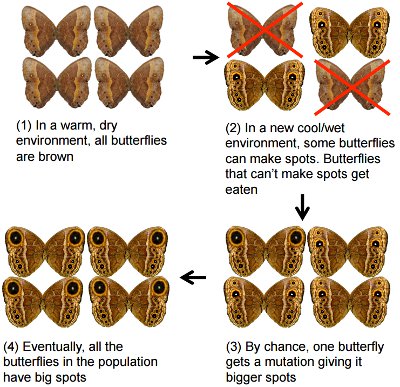 Over time, the ability to be entirely brown will be lost. The originally plastic trait will become permanent.

In this case, being able to sort of adapt bought the butterflies enough time to stumble on an even better mutation. Plasticity helped evolution along.

Cases like these are the most obvious way that developmental plasticity is crucial to evolution. Without it, a species would die out if the environment changed. Instead, plasticity allows a species to survive, until mutations happen that help it thrive in the new environment.

And Now a Bit of Controversy

The explanation I have given is the one accepted by most biologists. There are, however, some who think that developmental plasticity explains all (or almost all) of evolution.

These scientists would say that the main reason why animal species look different is because they grow up under different conditions. However, an overwhelming amount of evidence argues against such a view.

So while plasticity certainly plays a role in evolution, the vast majority of differences between species are caused by mutations and genetic differences. Plasticity is most likely a useful stopgap measure until something more permanent comes along.