How is DNA tested in people who died in accidents like a plane crash where their body is completely burnt? And who do they test their DNA against because they might be from different countries and far from the accident site? Is their DNA tested against/with their parents only?

-A graduate student from Nepal

For most DNA tests we don't need a lot of DNA. This means even a body that was burnt in an accident should have enough DNA for a proper test. In fact, we need so little DNA that scientists can even get useable DNA from a 700,000 year-old horse bone or a 40,000 year old Neanderthal.

Unfortunately, having the DNA isn't enough. It isn't like the victim's name is written in the DNA…

To figure out the identity of the victim, we need to compare it to a sample from the person or maybe a close relative. Luckily the first is possible even if there is no official DNA record because, again, we can get away with using so little DNA.  For example, there is enough DNA from hair on a comb or gum cells from a toothbrush to do a proper test.

If these aren’t available for some reason, then the next option is to get the DNA from close relatives of the victims.  Then, scientists can do a sort of paternity test to see which DNA is related to which group of relatives.  This can often be enough to establish someone’s identity.

If neither of these is possible, then things get much harder.  The victim might not ever be identified.

One possibility that isn’t normally done is to maybe use the DNA to build up a rough picture of a person.  Remember, our DNA has the instructions for making and running each of us.  So buried in that code is information about our ancestry, hair and eye color and so on.

The idea then would be to figure out some traits of the unknown person and see if it matches up with someone.  It is a good idea, but our understanding of human DNA is so incomplete that we wouldn’t get a very precise description.  Maybe we could identify someone if he/she was the only European on a plane full of people from Asia or some such scenario.  But we couldn’t do a lot more.

In the future, as we learn more and more about people and how our genes build our physical features, we may one day be able to tell victims apart just based on how they looked like.  Just not yet.

But for now, it is mostly a matching game. We need to match up the DNA we find to the people on the plane or their close relatives.  This isn’t as easy as it sounds…

As I said, we need to compare DNA to figure out who was and wasn’t on that plane. The matching is done using parts of the DNA that are different between people. Focusing on these differences is really important since the average two people share about 99.9% of their DNA.

There are lots of ways DNA can be different between two people. If you compare any particular section of DNA between two unrelated people, one person could be missing a small piece.  Another could have an extra bit of DNA sequence. Someone could just have a different sequence entirely.

These are all fine but don’t tend to differ enough between two people.  When it comes to matching identities, scientists generally use something called Short Terminal Repeats or STRs.

STRs are places where very short stretches of DNA repeat themselves, kind of like beads on a string. The great thing is that the number of times they repeat vary from person to person. And there is even more variation than that.

The line with M is the STR you got from your mom and the F the one from your dad (or father). But this wouldn’t be enough information to tell you from someone else.  Lots of people will have a 7 and an 11 at this spot.  This is why scientists look at many different spots on our DNA.

The diagram below shows three more STRs, each a different color to signify a different place in the DNA. There are two of each color because you have two copies of every gene (one from each parent). 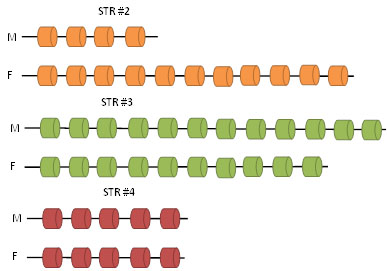 Both STRs can sometimes be the same length (like #4).  This just means you happened to get the same piece from mom or dad.

This still isn’t enough to tell you from everyone else.  For that we need to look at lots more STRs.  And that is just what the FBI does.

The FBI and the police in the United States use thirteen different STRs in a standard DNA test. They make up what is known as CODIS or Combined DNA Index System.

Remember, everyone has two of each of these STRs, so that makes 26 different copy numbers. Those 26 different numbers make up a person’s CODIS signature. Altogether, this means that the chance that you and an unrelated person have the exact same CODIS signature is less than one in a hundred trillion!

Below is a chart showing the locations of these STRs on our chromosomes. Chromosomes are long, continuous pieces of DNA. Pretty much everyone has 23 pairs of chromosomes, making 46 total. 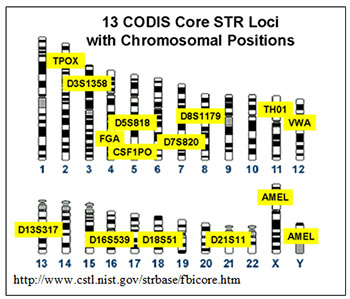 Now, back to identifying the plane crash victim. Of course, an exact match would be easy to figure out. You just see if they match up at each spot or not.

Things get trickier if we don’t have the victim’s DNA.  Then we have to try to figure out who the victim is by comparing his or her DNA to a relative’s DNA.  This is harder than it sounds.

If you can get DNA from a mom and a dad, it is relatively straightforward to identify the victim.  We can even do it with just a mom or dad (although there can be exceptions to this).  But if we have to go further up the family tree, things quickly become very complicated. We might have trouble identifying a victim even if we had his sister’s DNA!

Let’s use that for an example.  Say the victim is a man and we have his sister’s DNA.  This means we can’t use the Y chromosome to identify the victim since girls don’t have them.  This is too bad because the Y can be a powerful way to see if two men are related.

But still, this shouldn’t be too hard.  After all, a brother and a sister do share half their DNA.  Turns out though that it is still tricky.  Often if you just have two siblings, you cannot do the simple test we talked about and say with 100% certainty that the two are related.  The best we can usually say is that there is a good chance they are related.

To see why this is, we have to go into a little detail about how DNA is passed from generation to generation.  The best way to do this is with an example.  Let’s start out with a single STR from mom and dad.  Let’s assume the mother and father’s STR #1 looks like this:

I’ve written the copy number (how many beads) to the right. Now, we know that each parent will give one of their STRs to each of their children. But what makes things tricky is that which one gets passed is chosen at random.

Let’s do an example to see why this matters. Imagine we have the following three siblings who share the parents we talked about earlier: 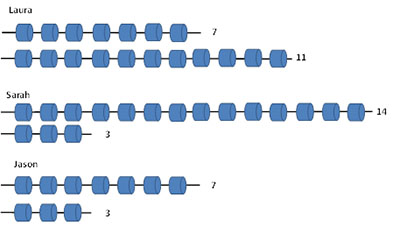 I have drawn these out so that the STR from mom is on top and dad’s is on the bottom.

As you can see, Laura, Sarah, and Jason all have one STR from each parent. Laura and Sarah actually don’t share any with each other but both share one with Jason.

If we stopped here, we wouldn’t be able to tell that Laura and Sarah were even related!  Which is why we look at more than one STR.  If we looked at many more STRs, Laura and Sarah (and Jason) will share about 50% of their STRs on average.

So let’s go back to our example about matching a sister to a potential victim’s DNA in a plane crash. Now we know that every STR is shared by the parents. And, about half the time, the parent passed down the same STR to both siblings. If you put those two together, you would expect that half of the victim’s STRs will be shared between the brother and sister.

Unfortunately, since we are only looking at 13 STRs, lots of people would share half of them with each other.  And not only that, a brother and sister might only share 10 out of the 26 or any other number.  It is very difficult to definitively say that two people are siblings if you only test their DNA.  Usually you need more relatives to be involved too.

We can see this in the test results below.  Using the 13 STRs from the CODIS (the 13 standard STRs that the FBI uses), here is what a potential result might look like: 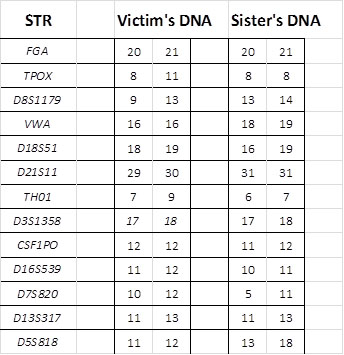 As you can see, the two share 50% of the STRs, suggesting they might be siblings. Some STRs, like VWA aren’t the same at all. Others, like FGA, are exactly the same. That would mean the two (potential) siblings got the same STR for FGA from both mom and dad.

But again, a lot of people might share half their markers like this.  The test is most likely not definitive.  Adding more relatives would provide more evidence that the two are or are not related.

Now I should mention that I simplified things quite a bit.  For example, if the two of them share a very rare copy number at some of their STRs, then they are more likely to be related.  And we haven’t even included the idea of mitochondrial DNA (mtDNA) in all of this.

All siblings get the exact same mtDNA from their mothers.  The investigators would undoubtedly test the potential siblings’ mtDNA to provide more evidence either way.  This would help but still may not be definitive.  Lots of people share very similar mtDNA.

Still, if you can get DNA from a victim’s relatives, you at least have a shot at identifying that victim.  And the more relatives we had, the stronger the evidence would be that the two are or are not related.   Another mystery solved using DNA!