My brother and I recently used the DNA testing company MyHeritage and the results said we shared 38% of our DNA. We are confused because we thought full siblings shared 50% and half siblings shared 25% of their DNA. Why are we right in the middle?

In this case you are almost certainly full siblings. Because of how this (and many other companies) calculate shared DNA, that 38% number is actually equivalent to 50%. In other words, the two of you do share around 50% of your DNA.

The reason they report 38% has to do with how they figure out shared DNA. And how DNA is passed from parent to child.

Basically they undercount certain regions of the DNA that companies like 23andMe calls “full identical.” This undercounting leads to that 38% number.

Half Your DNA From Each Parent

You have probably heard that we get half our DNA from our mom and half from our dad. That is why we are usually around 50% related to each of them.

To make things a bit simpler (hopefully!), let’s represent the DNA with rectangles. Here are mom and dad:

I have colored mom in blue and dad in red just to make tracking simpler.

The first thing to notice is that each parent has two rectangles. This is because all of us essentially have two copies of our DNA. Each copy is a bit different which is why one rectangle is a solid color and the other has stripes. (And also a big reason why we aren’t all exactly alike!)

When we have kids, we pass down one rectangle’s worth of DNA. That is how generation after generation people keep two copies of their DNA—they get a complete copy or rectangle from each parent. 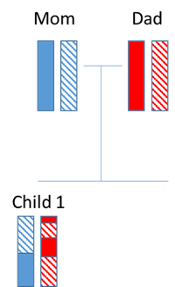 Notice that this child is 50% related to each parent. The child has half red DNA from dad and half blue DNA from mom.

The other thing to notice is that neither mom nor dad passed down a solid or a striped rectangle. Instead they each passed a mix of their two copies of DNA. This DNA swapping process is called recombination (and is another reason we are all unique). 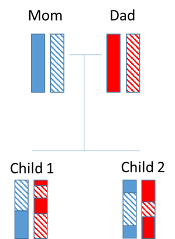 Child 2’s DNA is also made up of half of mom’s and half of dad’s DNA. But these siblings did not get the same DNA from mom and dad. This is why siblings are not exactly alike despite having the same parents.

So these siblings are each 50% related to their parents. And as you’ll see, they are usually around 50% related to each other as well. Even when your testing company says you only share 38% of your DNA.

OK now we are ready to tackle your question.

Let’s focus in on child 1 and child 2. We want to figure out how much DNA the two of them share with each other.

Here is just the left part of the image:

Now I will add boxes to show the regions where the two siblings share DNA:

So for example, they share a chunk of mom’s blue striped DNA (the first box in the middle on the left) and a chunk of mom’s solid DNA (in the bottom box). Notice also that in some areas, like the top of the blue rectangles, they do not share DNA.

If we tally this up, we will probably get around 50% shared DNA. Here it might be a bit more or less than that but keep in mind that this is just an example. Real life is more complicated.

In real life, each rectangle is split up into 23 long stretches of DNA called chromosomes. These chromosomes come in pairs which is why we have 46 of them—23 pairs. (And why the DNA testing company 23andMe came up with their name.)

Because the DNA is spread out over 46 chromosomes instead of just one, things tend to even out more. Sort of like flipping a coin 5 times vs. 5000 times.

The same isn’t true for 5000 heads in a row. Now we are talking about such high odds that it essentially won’t happen. That is why things tend to even out to more like 50% for siblings.

OK back to the question. Let’s see how companies tally the results.

How Companies Tally Up Shared DNA

All right so here is our comparison again:

It is important to keep in mind that this is not what the companies “see” in your DNA. Instead they have a mix where all four are in a tube at the same time.

This can lead to different ways of looking at the results. Which is why 38% can sometimes be equal to 50%.

The key difference has to do with the highlighted box here:

Companies that end up with full siblings sharing 38% of their DNA can’t see the shared red DNA in the highlighted box because it overlaps with the shared blue DNA. In other words, its calculations leave out the red DNA. Companies that report back 50% between siblings can see both boxes and so they count the red in their calculations.

This is why companies give different numbers for the same result.

Here, for example is a set of 23andMe data: 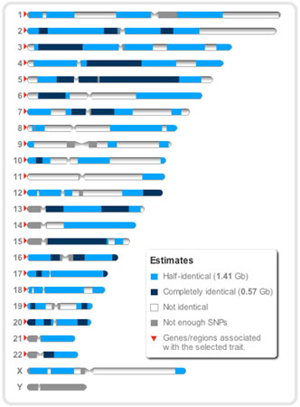 I won’t go into too much detail about this image (although if you are interested, click here). Just pay attention to the colors.

Here is what they correspond to on my image: