Can first cousin DNA testing identify relatedness when more than two prospective living first cousins are available for testing? In my particular case all three individuals are male (I am one of them), the other two may be sons of my mother's sister and brother respectively.  I understand that testing between two first cousins is not very reliable and am wondering if having a 3rd increases reliability in any noticeable way.

-A curious adult from Ontario Canada

Here at Ask a Geneticist, we try to post one answer per week online but we also answer thousands of genetics questions each year personally via email.  I answered this question awhile back and the questioner followed the advice and found that he is almost certainly first cousins with both men.  He was adopted and this test let him confirm who his birth mother was and to get in touch with some blood relations.

This week I thought I’d take you through the process so if you ever need to figure something like this out, you’ll be able to do something similar.  Hope it is useful…

The DNA tests he is referring to are the siblingship ones based on paternity testing.  These are almost always too weak to see a DNA relationship between two first cousins and adding a third doesn’t usually help much.

Luckily though, these tests are not his only option.  There are newer, more powerful tests offered by companies like 23andMe, ancestry.com, and others that are able to see DNA relationships at the first through fifth cousin levels.  And when he and the two other men took a 23andMe test, they found that the three of them were most likely first cousins.  Here are their results (I have erased names and any identifying marks): 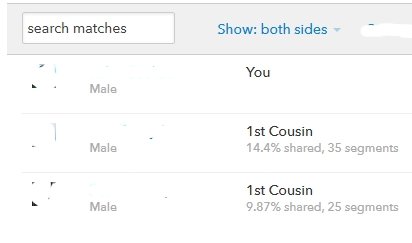 First off you can see that the test was able to identify that the three of them are related.  On its own this is more than the other kinds of tests could probably do in cases like this.

The results also show that our questioner shares 14.4% of his DNA with one man and 9.87% with the other man.  From this the algorithm that analyzed the data concluded that they are all first cousins because first cousins share, on average, 12.5% of their DNA.

Of course they don’t have to necessarily be first cousins…other relationships can be in these ranges too (although first cousin is the most likely).  This is where the non-DNA research side comes in.  The legwork the questioner did pointed to these two men as likely first cousins and the DNA data confirms it.

As I said, even without the other research this test could definitely conclude they were all related.  Sometimes even that is enough to answer a person’s question (or to find way too many relatives you didn’t even know about).

The key difference between tests like those offered by 23andMe and the earlier ones is how much DNA they each test.  Older siblingship tests look at 20 or maybe up to 50 or so different spots on the DNA.

Tens of markers are usually plenty to determine paternity if you have a mom, a child and a potential father, but they aren't nearly enough to see that two cousins are related.  Many, many people will share the same amount of DNA as a first cousin with these limited number of markers which means you can’t tell who is related and who isn’t without many more relatives being involved.  (See our previous answers here and here for other issues with this sort of testing.)

The newer tests look at a million or more different spots on the DNA.  Obviously more is better here but it isn’t just the number of markers that matters.  No, instead it is the fact that having so many markers means that these companies can follow whole chunks of DNA through a family tree.  These chunks are the “segments” in the results section.

Only relatives will share long stretches of DNA like this.  And the closer the relative, the more of their DNA will be made up of these shared segments.

You can see these segments if you look at the chromosome view of the results.  Here is what a comparison of these three men’s chromosomes look like (again I erased the names and any identifying information): 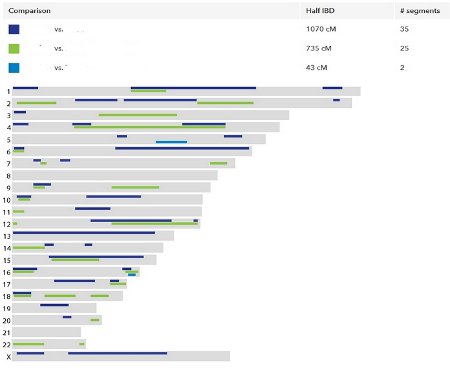 As we talk about here, we don’t inherit whole chromosomes from our parents (the exception is that boys essentially inherit their Y and girls one of their X’s from dad unchanged).  Instead, we inherit pieces of chromosomes through a process called recombination.

The important point here is that only a close relative will share long stretches of DNA like this and the more of these two people share, the closer they will be related.  Which of course means that these three men are pretty closely related!

The other important point is do not expect to end up sharing the theoretical amount of DNA you may read about online.  As you can see in this case, these men are all probably first cousins even though none of them share exactly 12.5% of their DNA.  The 14.4% of his DNA that the questioner shares with one cousin and the 9.8% he shares with the other cousin are close enough to 12.5% for these three men to be first cousins.  We talk about why you get a range of numbers around the theoretical result in our previous answer here.

So there you have it.  If you want to confirm relationships using DNA, your best bet is to use one of these newer tests.  If you are related, you will see the relationship unless your relationship is too distant.  Or it may miss it if the two of you got really unlucky and happened to not get the same bits of DNA passed down to you.  This last point is unlikely but theoretically possible.