I am a dog breeder and the question of line/inbreeding comes up often with fellow breeders. Here is my question—"Is there more chance of genetic flaws, undesirable diseases, etc. in mating a Mother to Son versus Father to Daughter?" Several breeders believe there is with a Mother to Son mating because of the X chromosome carrying more DNA.

What an interesting question.  As someone who focuses mostly on people, I never really thought about incest in this way before.

After a bit of thought, the quick answer is that there would for sure be no difference for the male pups.  Their risk is the same whether their parents are a mom/son pair or a father/daughter pair.

The answer is a bit less clear for the female pups.  Still after playing around with some diagrams, it looks like the same seems to be true for female pups as well.  I am not sure I expected that to be true.

Inbreeding causes problems because of something called recessive alleles.  Basically these are versions of genes that cause disease (or an undesirable trait) if a pup gets one from both mom and dad.  There are usually no issues if a pup has just one of them.

Scientists currently think that people have around 5-10 of these silent alleles lurking in their DNA and if anything, there are probably more in dogs.  Unrelated dogs will have different sets of these disease genes although there can be overlap, especially in similar breeds.

The risk for inbreeding comes from the fact that the parents are more likely to share the same set of these hidden genes because they are related.  Which means each pup is more likely to get a bad one from both parents and so end up with the disease/flaw.

Keep in mind that this isn’t a for sure thing.  Inbreeding only means an increased risk for a genetic disease.

Our genes are stored on long pieces of DNA called chromosomes.  Dogs have 39 pairs of chromosomes with one of each pair coming from mom and the other from dad.

This is why your question about the X chromosome doesn’t really apply to male pups.  Males have an X and a Y chromosome which are very different from one another.  The X chromosome is a giant chock full of genes while the Y is this puny thing with just a few genes that can turn a mammal into a male.  Closely related parents will not affect the X for male pups (although the other 38 pairs are still an issue).

If males get an X with a version of a gene that causes a disease from their mom, they don’t have a chance to get a working gene from their dad.  It takes just one bad gene on their single X chromosome to cause problems for male dogs (and people).  They will get whatever disease mom passes to them.

But none of this is true for female pups.  They have two X chromosomes that have the same set of genes and so can potentially have inbreeding issues with the X.  Now the question is whether it matters if their parents are mother and son or father and daughter.

As I said earlier, when parents have a child, they pass one chromosome from each pair down to the child.  For dogs this means mom passes down 39 chromosomes and so does dad with end result being 78 in total.

The chromosome that is passed down is chosen at random.  Here is what this looks like for just the XY pair:

Mom has a black and an orange X and dad has a green X and a black Y.  Below the two of them are the four possible pups.

Before seeing what happens with inbreeding, we need to add one more wrinkle to all of this. In reality what happens is that there is mixing between like chromosomes in a pair before they are passed on.  This recombination can only happen between mom’s X’s…dad’s X and Y are too different to swap DNA.

What this means is that there are really many more than four possible combinations.  Here is what one pairing might actually look like:

I have just shown one possible male and female pup but really, there are many, many possibilities because of the recombination between mom’s X chromosomes.  Still, let’s use these four as our incestuous examples.  Here is what these pairings might look like: 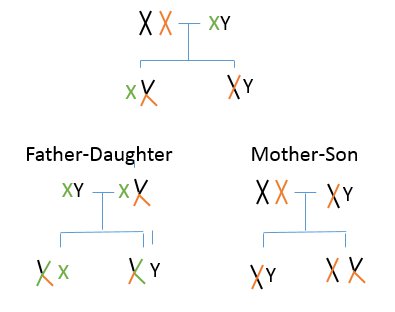 At the top I have kept the original mating.  Now in the bottom two I have shown one possible outcome of a father/daughter and a mother/son mating.

First off you can see that it doesn’t really matter for the male pups.  Remember, the issue is that both chromosomes will have the same bad gene and since male dogs have one X, it doesn’t matter.  (Of course it matters for the rest of his chromosomes!)

For the female pups, pay attention to how much of their X’s overlap.  Admittedly this is just one outcome but you can see that in each case about half of their X overlaps.  In the father/daughter case the two X’s share the green DNA and in the mother/son case, they share one quarter of their black and one quarter of their orange.

Of course it didn’t have to turn out this way.  It could have been that the two X’s share more or less of their DNA.  It all has to do with how the DNA happened to get swapped.

But what it does mean is there doesn’t appear to be any real big difference between these types of incest.  So neither is the safer route and both should have the same set of issues.

Of course, the inbreeding issues for these female pups would be for diseases that already affect the male pups!  A single X is the same as two identical X’s in these cases.