My cousin and I have dads who are brothers and mums who are sisters. We like to call ourselves double cousins or half-sisters. How closely related would we actually be?

-A high school student from the U.K.

Double cousin is the usual term that is used. But you are also as related as half-sisters.

Instead of the usual 12.5% of DNA that first cousins share, the two of you share around 25% of your DNA. This is the same amount that you would share with a grandparent, a half sibling or an aunt or uncle.

Let’s get into a discussion of why the two of you share 25% of your DNA.

Most people know that we get half our DNA from our moms and half from our dads. Here is a picture that shows this:

In this picture, the dad is in blue and the mom is in pink (I know, stereotypical…but it is easy to remember). This is way oversimplified but is a useful way to think about things.

As you can see, the child is half blue and half pink. She got half her DNA from her mom and half from her dad.

Now let’s expand things out a bit to include grandparents: 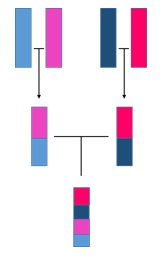 As you can see, a grandchild gets around 25% of her DNA from each grandparent. So she has ¼ dark pink, ¼ light pink, ¼ dark blue and ¼ light blue.

Unfortunately, this is too simple a way to explain your particular situation.  This is what it would look like if we added your cousin’s parents to the mix: 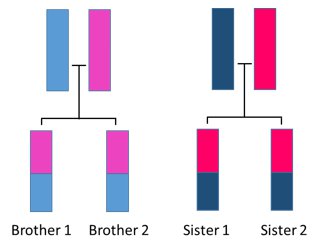 As you can see, if we show things like this there isn’t any way to tell your mom (sister 1) from your cousin’s mom (sister 2). The same thing is true for each of your dads.

The key thing we need to remember to explain this is that brothers and sisters do not get the same DNA from their moms and dads. They get a set of DNA from each that overlaps so that they will on average share 50% of their DNA.

To show this, we need to make our image a bit more realistic. Lucky for you this just makes it harder for me to draw, not harder to understand.

DNA is Stored as Chromosomes

The first thing we need to do is to give each person two rectangles of different colors. These are supposed to represent that our DNA is organized into chromosomes.

This is still too simple as we each have 23 pairs of chromosomes but it is a start. You can just take what we learn from the one pair I will be showing and expand it to the other 22 pairs. (Well, to be a stickler, 21 of the pairs. The X and Y pair in males acts differently.)

OK so here is what someone will look like now:

They have two sets of nearly identical DNA. In this case, they have one dark pink and one light pink copy. Remember, this is just one person. Let’s say it is the mom.

Now we’ll add dad and see what their child will look like: 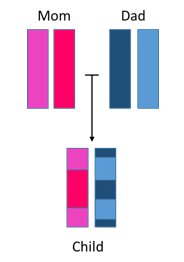 As you can see, these two children have different, overlapping DNA. In other words, child 2 also got half her DNA from mom and half from dad but has some different DNA from her sister. This is different from our first set of pictures where we couldn’t tell the sisters apart. 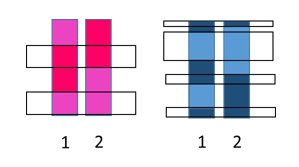 In this drawing, I have boxed the parts of each chromosome the sisters share. As you can see, they end up sharing around half their DNA. (Click here for a more detailed explanation for why it isn’t exactly half each time.)

OK now back to your question. Let’s say child one is your mom and child two is her sister. Let’s draw out each of your dads: 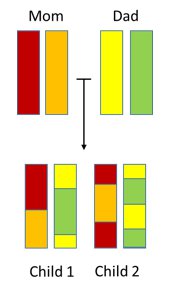 All right so here we will say that child 1 is your dad and child two is your cousin’s dad. Now let’s get you and your cousin into the picture: 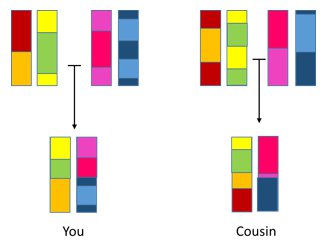 Lots of pretty colors! This is why the two of you share 25% of your DNA. It is because your parents are related. Here are the chromosomes lined up so you can see the bits that match up:

In this picture each of your chromosomes (Y) is lined up with your cousin’s (C) and I have put boxes where the DNA is shared. The two of you share a bit more than 25% of your DNA on this set but it would even out over the other 22 pairs. You’d end up with about 25% shared DNA in the end.

Now let’s see what happens if your dads aren’t related. I will gray out their DNA so we only focus on your mom’s DNA: 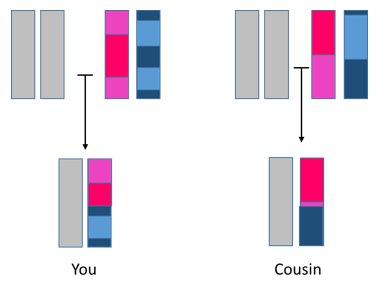 Now the cousins only share DNA on one set of chromosomes. The other set has no shared DNA and so the two are, on average, half as related as double first cousins. They only share 12.5% of their DNA: 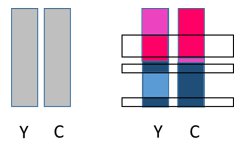 So the two of you share as much DNA as half siblings. But the DNA picture would look different for each set. The half-siblings would have a grayed out chromosome in each pair but share more on the chromosome that comes from the shared parent.

Probably more than you wanted but there you go. This is why you share 25% of your DNA.