-A curious adult from New York

The answer depends on whether or not that someone is a brother or a sister.

Brothers usually can’t be carriers. But they are at a far higher risk of ending up with Duchenne muscular dystrophy (DMD) than are their sisters. In this case they have a 50% chance.

Sisters on the other hand are very unlikely to end up with DMD. Instead they typically have a 50% or 1 in 2 chance of being a carrier.

These differences come down to the X chromosome.

Biological males usually have a single X (and a Y) while biological females usually have two X’s. This matters in this case because the DNA differences that cause DMD are found in the dystrophin gene on the X chromosome. And having even one working copy of this gene keeps DMD away.

So boys either have a single working copy of the dystrophin gene or a single broken one. They either have DMD or they cannot pass it on to their children. (They usually can’t pass what they don’t have!)

With girls it is a little more complicated. They have three possible combinations for the dystrophin gene:

Mom is a Carrier

As I said, usually only women can be carriers for DMD. So in this case, since dad does not have the disease, we will say mom is the carrier. She passed it down to her daughter, the sister in your question.

In this example, the red X has the broken dystrophin gene and the black one has a working copy. She has one of each and so does not have DMD. But she is a carrier.

Keep in mind that I am only showing one of her 23 pairs of chromosomes. What I say for the X applies to all those other pairs as well.

OK back to that pair of X’s.

Each of mom’s eggs have either a red or a black X. And which egg is released each month is selected at random. Let’s say these are the two possible eggs:

Notice I made his Y much smaller than the X. I did this because that is pretty much how it is in real life. The Y is a tiny little thing pretty much devoted to turning an embryo into a male and making him fertile when he grows up.

Here are dad’s two possible sperm (at least with regard to his X and Y pair): 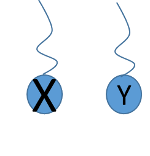 Now let’s have the two of them have children. Remember, they will each pass one of these chromosomes randomly which gives the following four possibilities: 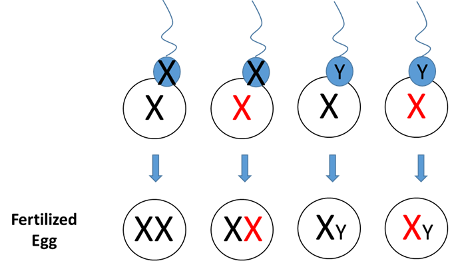 The sister that got the red X, fertilized egg number 2, does not have DMD because she has a black X with a working dystrophin gene. But she can pass the red X down to her kids just like her mom could.

The brother that got the red X, fertilized egg number 4, ends up getting DMD because he has no working dystrophin genes. He has only the one X and its copy of the gene doesn’t work.