I’ve read your brilliant explanation of dyslexia from 2009, and wondered if there was any more recent information.

I know omega 3 in pregnancy reduces dyslexia, which begs the question why. Does the DNA change or act differently? Yet I also know that different studies have shown that stress during pregnancy seems to make a massive difference. How much a difference does stress in pregnancy make? Is the gene related to dyslexia are normally dominant? Does it matter more if the father or mother has dyslexia?

— A curious high school student from the UK

Dyslexia—where a person has trouble reading—is a complicated disorder. Scientists still don’t totally understand what causes dyslexia, or if it can be prevented.

But you’re right that genetics, diet, and stress could all be risk factors. It will take more research to be sure, but I’ll sum up what scientists currently know about the link between these things and dyslexia.

Genes are probably a big part of what causes dyslexia1,2. We know this because dyslexia tends to run in families.

But it isn’t 100% genetic. Identical twins have identical DNA, so if dyslexia were 100% genetic they would always match. They often both have the disorder… but not always.

There isn’t a single “dyslexia gene”. At this point, over 40 genes have been linked to dyslexia in some way!3–6 Each gene probably only has a small effect on its own. In a genetically complex disorder like this one, there isn’t really a single “dominant” or “recessive” gene.

Even though we’ve made progress, it will take a lot more research before we really understand how changes in genes could cause dyslexia.

Does it matter more if the father vs the mother has dyslexia?

No. A few genes associated with dyslexia are on the X chromosome, and boys are diagnosed with dyslexia much more often than girls7,8. But there’s no reason to think that you’re more likely to get dyslexia from one parent over the other.

And we do know that genes aren’t the only cause of dyslexia—like you mentioned, there are other risk factors involved too. 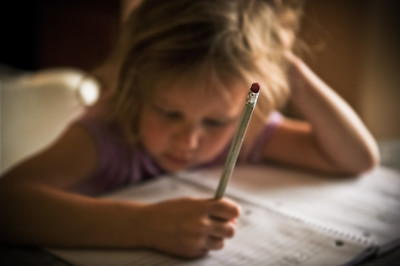 Dyslexia doesn’t look the same for everyone, which makes it hard to pinpoint one cause.
Image credit: r. nial bradshaw.

Does stress during pregnancy increase the risk of dyslexia?

We don’t know. It’s possible that stress during pregnancy can affect a child’s reading ability, and things like memory and IQ scores9,10. But not many people have looked at dyslexia specifically.

We do know that that other health risks could be linked to dyslexia, like smoking during pregnancy, how much a baby weighs, and the parents’ ages3.

So it’s possible that stress could have an effect too, but we don’t know for sure. Similar to how genes work, lots of different health factors probably have very small effects on their own.

Can omega-3 fatty acids decrease the risk of dyslexia?

We don’t know that either. But a lot of scientists have tried to find out.

Scientists became interested in the link between omega-3 fatty acids and dyslexia when they noticed that some dyslexic children had signs that they were missing these nutrients13–15.

So they tested whether giving dyslexic children omega-3 supplements could improve their reading ability.

A number of studies found that omega-3 fatty acids supplements can help children who are dyslexic (or have related conditions, like ADHD)8,17–20. However, the differences are usually small, and depend on exactly what type of supplements are used.

On the other hand, other studies show that omega-3 fatty acids don’t have any effect on reading or learning8,19–21.

Most scientists agree that there’s not great evidence for using omega-3 fatty acids to help treat dyslexia, and that more research is needed.

(Also, it’s unclear if omega-3 fatty acids during pregnancy can reduce the risk of dyslexia. But they might be good for brain development, and could slightly improve IQ scores in children later on11,12.)

We know that the brain is especially high in fatty acids, and that omega-3’s are important for brain development. This is because fatty acids can have a big effect on the membranes of brain cells, which can affect how well these cells work8,13.

But omega-3 fatty acids also might be able to affect genes16. They don’t change the DNA of the genes, but they can affect how much certain genes are “turned on”. It will take more work before we understand if these changes can affect the brain. 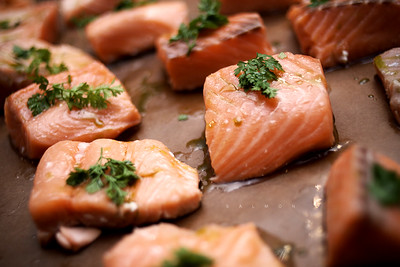 Eating fish is recommended to make sure you get enough omega-3 fatty acids in your diet13.
Image credit: Camilo Rueda López.

Thanks to science, we know more about dyslexia now than we did ten years ago. But the human brain is complicated, and it will probably take many more years before we can say we really understand what causes dyslexia.