My ethnicity results state I’m 51% Italian. Would both of my parents need to be Italian? If neither parents are 100%?

If the 51% were a rock solid number then yes, both parents would have to have some Italian in their DNA. After all, you only get 50% of your DNA from one parent! At least 1% of your Italian heritage would have had to come from the other parent.

But in the real world of DNA ancestry testing, that percentage is a bit more wishy washy. I think of them as telling you that a sizeable part of your heritage looks Italian in the DNA test. Could be lower, could be higher.

If the number is more like 40%, then it could easily have come from just one parent. Even if that parent was only 40% Italian like you!

It is also important to keep in mind that “Italian” might be broader than the current borders of Italy. It might include France or Switzerland or even a country further afield.

So the 51% number is a ballpark figure that could have come from one or both parents.

What I’ll do for the rest of the answer is quickly go over how you might end up with 40% Italian DNA from a parent who also has 40% Italian DNA. Then I’ll go over a couple of ways to get more information about your ancestry from your 23andMe and Ancestry.com results.

Parent and Child with 40% Italian

To understand how a parent whose DNA looks to be 40% Italian might have a child with the same percentage, we need to take a step back and review how DNA is stored in our cells. And how it is passed on.

DNA is stored in something called chromosomes. People usually have 46 of these.

These chromosomes come in nearly identical pairs. One from each pair comes from mom and one from dad.

Imagine these are the 23 pairs: 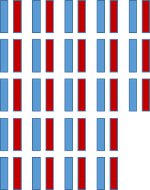 Here I have drawn 23 pairs with each pair having a red and a blue copy. I have circled one of the pairs in this image with a green circle: 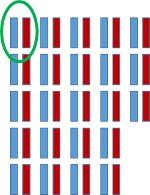 Let’s say the blue ones came from dad and the red ones from mom like this: 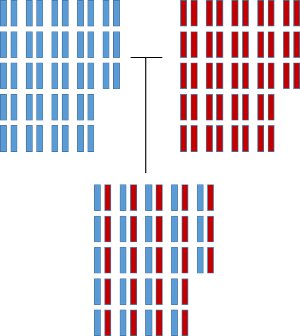 This child got one blue from each of dad’s chromosome pairs and one red from mom. Which of each pair they get is chosen at random.

Now I am going to overlay ancestry onto dad’s chromosomes.  To keep things simple let’s say he is 40% Italian and 60% sub-Saharan African. 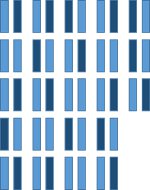 When he has a child, dad passes one chromosome from each pair down to that child. Again the one passed down is chosen randomly. In our image, it could be the one on the left or the one on the right in each pair.

Let’s say that by chance they were passed down like this: 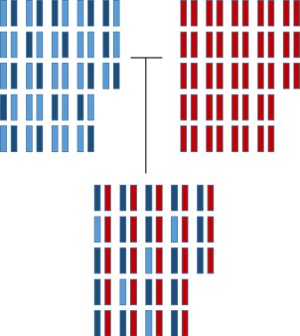 By chance, this child happened to get all of dad’s “Italian” DNA (the dark blue chromosomes). The child is 40% Italian just like dad.

Now this is a simplification as DNA passing is a bit more complex than this (click here to see how). But the basic idea behind it is sound. This is how parent and child could both be 40% Italian even if the other parent has no Italian DNA.

Now let’s get a feel for what you can piece together from two different DNA testing companies.

Ancestry.com has a very useful resource that gives you the likely range of your percent ancestry. In other words, it lets you know how reliable that 51% is and what its upper and lower limits are.

Let’s use my results as an example. If I click on a particular ancestry, the following image comes up: 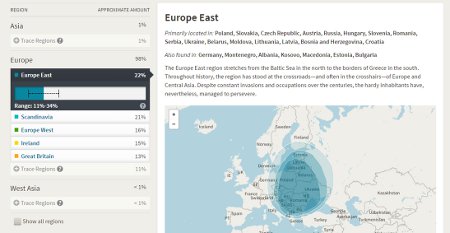 This is a little hard to see so I will break it up into two separate images: 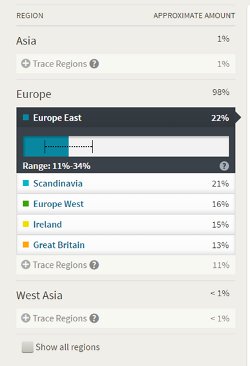 If you clicked on your 51% Italian and got a 30-70% range, then at the lower end, all of the Italian could have come from one parent. The algorithm is saying that 51% is the most likely number but reality could be closer to the 30% number.

Here is the right hand side of the results: 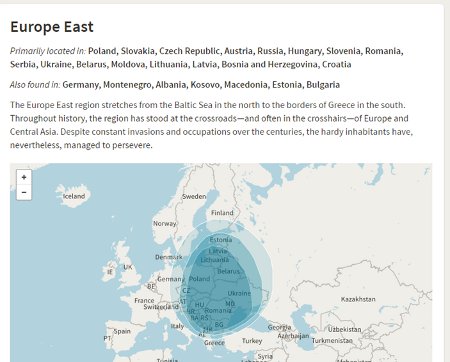 Note on the map that even though “Europe East” is centered on Eastern Europe, the outer fringes, the lighter shades of blue, are in Sweden and Switzerland! My Eastern European DNA might be Swiss.

So if you know where to look, Ancestry.com does a very good job of letting you know the wiggle room in what they present. While 23andMe doesn’t give this sort of information, it provides a way to directly see if you got a certain ethnicity from both parents if your DNA lines up just right.

As I said, if you did a 23andMe test, then you won't get the range of possible percentages.

What 23andMe does provide is a tool that can help you figure out if your Italian came from one or both parents. They do this by “painting” your ancestry results onto those chromosomes we talked about earlier.

Here is a picture from 23andMe of my results: 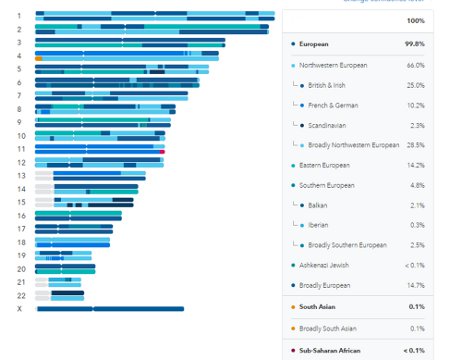 What they have done is shown my ancestry on my DNA. What is represented is 22 chromosome pairs labeled 1-22 and my single X. (They do not show the Y that goes with my X in this image.)

Notice there are two chromosomes for each number. One of each pair comes from mom and one from dad.

There is a lot going on in this image but here is what it looks like if we hover the cursor over just Scandinavian: 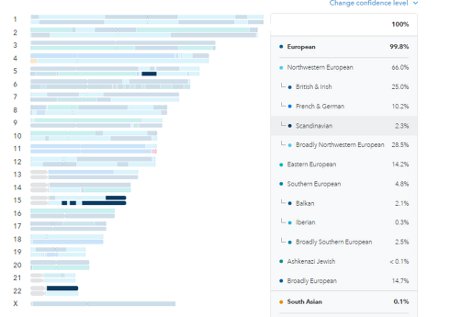 On pair 15, you can see that both chromosomes in the pair have Scandinavian segments that overlap. I have circled this region in red in this image: 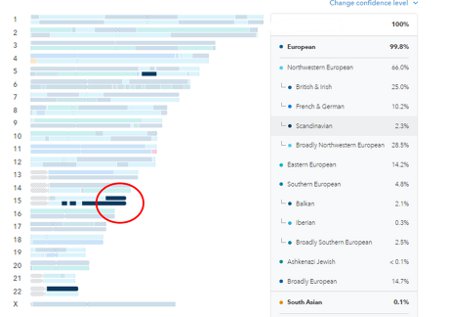 When an ethnicity overlaps like this it usually means that it came from both parents. Remember, the top chromosome came from one parent and the bottom from the other.

The key is the overlap. The fact that Scandinavian is on the top chromosome in pair 22 and the bottom one in pair 5 doesn’t mean each came from a different parent.

In my case in particular it is hard to assign which chromosome in each pair comes from mom and which comes from dad. I could do this if I had either of my parent’s DNA but I do not.

Without my parent’s DNA to compare with, there is no easy way to tell which chromosome came from which parent. Unless of course the parents have two very different ethnicities…something like sub-Saharan Africa and Japanese.

You could do something similar with your Italian to see if you got it from both sides.