What are the chances a baby will come out looking more like the father or getting more of the father’s genes?

-A graduate student from New York

So getting fewer or more genes from a parent is not the reason that a child favors that parent. Instead, it has to do with the versions of each gene you get from each parent and what traits that combination will give.

This means that under some circumstances, each child will have a really good chance at favoring dad while in others, they’ll have a better chance of favoring mom. And sometimes a child won’t favor either and may look more like an uncle or an aunt or different from everyone else in the family. That is the beauty of genetics!

Because of this it is very difficult to predict beforehand which parent a child will look like. You have a better shot at making some predictions if you know each parent’s DNA but even then you can just make predictions. You might be able to say the child has a 50% chance of having dad’s red hair or a 25% chance of having his blue eyes.

What I thought I would do to try to illustrate this point is to give an example of two parents and go over a few scenarios where the genes work out so that one parent is favored and another where a blend of the two is favored. Then I’ll go over a third where the child doesn’t favor either parent.

In our examples, I will focus on a red haired, blue eyed mom and a brown haired, brown eyed dad. As you’ll see, in some cases all the kids will look like dad and in others, they’ll come out looking like dad, mom, or a combination of the two.

Before seeing how these are all possible, we need to take a step back and do a quick review of genes and how they work. Don’t worry, this will be quick…

So here are the three possible combinations:

The hair color of two of these combinations is obvious and so I have included them. Someone who is RR won’t have red hair and someone who is rr will.  The tricky one is people who have one of each, Rr people.

Now we are ready to look at our two parents and their kids. As you’ll see, each parent’s hidden, recessive genes affects the chances that a child will look like a parent.

Favoring One Parent or Being a Blend

Imagine a red haired, blue eyed mom and a brown haired, brown eyed dad.  From this we know what genes mom probably has. Her red hair means she is rr and her blue eyes mean she is bb.

Dad, though, is trickier. He can be any of these four possible combinations:

All four of these people would have brown hair and brown eyes because they all have at least one R and one B. But the chances of favoring dad, instead of our red haired, blue eyed mom, vary with each.

Let’s first imagine the RRBB dad. Remember that each parent passes just one copy of each of their genes to each child. This dad can only pass an R and a B because that is all he has to give.

Our red haired, blue eyed mom can only pass an r and a b for the same reason. This means that every child will be RrBb—they will all have brown hair and brown eyes. They will all favor dad.

If we instead look at an RrBb dad, then we can get completely different results.  In this case dad can pass either a B or a b and either an R or an r. This leads to four possible children:

(Go to the end of the article if you are interested in seeing how I figured this out.)

Of course, the same would be true for a red haired, blue eyed dad and a brown haired, brown eyed mom. Except that there would be some cases where mom was always favored.

And Now For Something Completely Different

So far we have focused on a child favoring one parent or being a blend of the two. It is also possible for them to be different from both parents. For this I will focus on eye color but something very similar happens with hair colors other than red.

Eye color is a bit more complicated than I have painted here. At its simplest, there are actually two eye color genes (and this isn’t nearly complicated enough to really explain eye color).

That was probably confusing so here is a table of each of the possible gene combinations and the color eyes they would have: 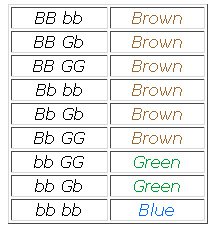 Let’s go back to our original example. Mom has blue eyes and so is bbbb. Dad can be any of six possible combinations but let’s say he is BbGG.

Now imagine adding more and more genes, each with their own different versions. Maybe the parents have wavy hair and the child ends up with straight hair, maybe our brown haired dad and red haired mom have a blonde child, maybe the child has dad’s nose, maybe…

As you can see, things get messy fast! A child will not always favor one parent or the other, it depends on each parent’s genetic combinations. And a bit of chance about which genes happen to get passed on.

Mom has only one combination she can pass on, rb, and dad has four. You then match up each box and get the, in this case, four possible combinations: