-A curious adult from Texas

The information that you found is correct. There is almost certainly a 50% chance that any one of your sons will be affected by red-green colorblindness.

But this doesn’t mean that if you have four sons, two will be colorblind. This is just the most likely result. All or none of your sons being colorblind is possible too.

It is like flipping a coin. Each time you flip a coin it can come up heads or tails but the previous flips don’t affect the chances on the next flip. If you get three heads in a row, there is still a 50% chance that you will get heads on the next flip.

The same is true for kids. Just because the first three sons were colorblind, that does not affect the chances for the next son. He will still have a 50% chance of being colorblind. So really, the fact that all four of them have the condition is most likely just a statistical quirk, like flipping a coin four times and having it always come up heads.

The odds of that happening are slightly above 6%, and I’ll explain why that is in a moment. But first, let’s talk about colorblindness and how we know that the son of a carrier mother and unaffected father has a 50% chance of having the condition.

Our instructions are grouped together into 23 pairs of chromosomes. We get one chromosome of each pair from our moms and the other one from our dads.

People with at least one set of unbroken photopigment genes have normal color vision. So a woman can carry a broken gene and not be affected as long as her other X chromosome has a working copy. However, since men only have one X chromosome, they need only a single broken copy to be colorblind. They have no back up.

Odds of a Child Being Colorblind

Let’s refer to an X chromosome with a broken gene as Xc and an unaffected X chromosome as just X. Since you’re an unaffected carrier we know your chromosomes are X/Xc, and since the father is unaffected, he is X/Y. This description of your genetic makeup is called a genotype.

When you have children, it is completely random which genes you pass on. Gregor Mendel figured this out in the earliest description of genes way back in the mid-18th century.

We can use a tool called a Punnett square to figure out the odds of having a child with a certain genotype. This is a 2x2 grid with one parent’s genotype listed along the top and the other along the side. Then you simply fill in each box with the letters that match the row and column, as below*: 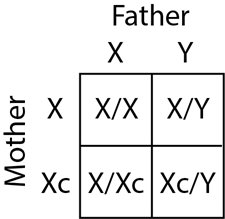 Keep in mind that it only takes one working X chromosome to make a set of photopigments. Children with at least one undamaged X chromosome won’t be colorblind.

Since we’re only talking about sons in this question, we can ignore the left column, and we’re left with a 50% chance of any son being colorblind. It’s a coin flip.

*Click here for more complete instructions for filling in a Punnett square.

A Matter of Statistics

So let’s imagine flipping four coins. The most likely scenario is that you get two heads and two tails. However, some of the time you’ll get heads three times and tails one time, and once in a while you’ll happen to get all four heads or all four tails.

For each flip, the chance of getting heads is 1 in 2 or 1/2. To find the odds of several events happening together, you multiply the odds of the individual events. So for four heads in a row it’s:

Each of your four sons being red-green colorblind is just like flipping a coin four times in a row and getting heads each time, so this also had roughly a 6% chance of happening. While 6% isn’t a very high number, we shouldn’t be surprised to see it happen every now and then.

In fact, you passing on an Xc chromosome to four sons is no less likely than the father having passed on his Y chromosome to all of them. It’s not really any more unusual that each boy is colorblind than it is that all four children are boys.

An Interesting but Rare Alternative

The most likely explanation is that your situation is a statistical quirk. But there is also a much less likely possibility in which each of your sons has a 100% chance at being color blind.

It turns out that there are a couple of different genes involved in telling red from green and that you only need for one set to be broken to be color blind. To make things simple, let’s call them Gene A and Gene B. 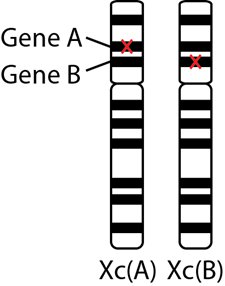 You would still be able to tell red from green because you have a working copy of each gene. You can make both types of photopigments.

The same would not be true for your sons. Each son would get either an Xc(A) or an Xc(B). Since boys have no back up second X chromosome, all your sons would be colorblind even though you aren’t. (As a side note, in this case each of your daughters would be a carrier.)

I don’t have the numbers on how common this situation is, but it should be far less than the 6% chance of one gene just happening to be passed to four sons. Which means the most likely explanation is just that, the luck of the draw.