Could further research into the FOXP2 gene pinpoint when on the evolutionary timeline of Homo sapiens language developed?

It is hard to say if more research on FOXP2 will help us better figure out when humans started being able to use language. First off, a whole lot has already been done.

For example, we know that FOXP2 is definitely an important gene for human speech. People with a damaged FOXP2 gene struggle to speak clearly.

And we know that FOXP2 is special because it controls many other genes involved in speech. It has a bigger role than many other language genes.

But it doesn’t control everything about us being able to speak so much better than our nearest relatives, the chimpanzees. Many other genes outside of its control play a role too.

And yet we know that FOXP2 is really important and that the human version is different than the one found in other apes (and the same as the one found in Neanderthals). Biologists say that these differences sprang up several hundred thousands of years ago.

Other genetic changes important for language happened in a similar time frame too. So did the change in the FOXP2 gene get the ball rolling on human speech or did it come after other critical differences?

For now we just don’t know.

To understand why this is the case, let’s begin by talking about the story of FOXP2 in the KE family.

Why Did Half of the KE Family have Trouble Speaking?

In a 1990 study, scientists researched the British KE family. (The name “KE” is a nickname used to protect their identities.)  Half of the family members have strong speaking disabilities. They mispronounce words such as “spoon” and “blue” by instead saying “boon” and “bu”. The other half of the family is completely fine.

After looking at the KE family tree, the scientists thought that the condition must be genetic. Some scientists claimed that we were about to stumble upon a single gene that would explain why we have language.

In a 1995 study researchers showed there were many differences between the affected and unaffected in the KE family. For example, the family members with speech problems found it harder to move their jaw. And brain scans showed that their brains would activate in unusual patterns. They also scored lower on IQ tests that didn’t rely on language. So if there was a single gene responsible, it wasn’t just controlling language.

It would take 6 more years to find the responsible gene.

What is the FOXP2 Gene?

In a 2001 study, scientists looked at the DNA of the KE family. They found one difference separating the affected and unaffected family members.

The genetic change was in a gene called FOXP2. They finally found the gene causing the speech problems in this family.

The gene itself is very special. The name FOXP2 tells us that it is from a family of genes called FOX genes.

FOX genes are a specific kind of regulator, called a transcription factor. These factors control the strength of other genes. 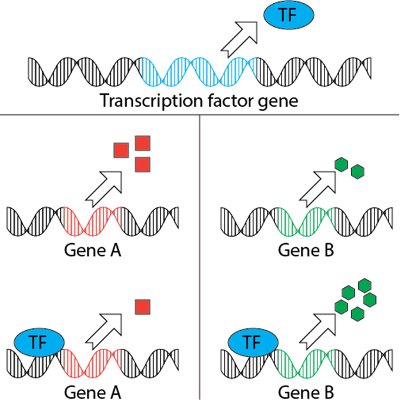 So it’s not accurate to say that FOXP2 is directly responsible for human language. It tells a bunch of other genes what to do, some of which may have been around in their current form longer than FOXP2.

After this incredible find, evolutionary biologists decided to look at FOXP2 in other animals to learn more about what it means for us.

What Can We Learn about FOXP2 from Other Animals?

Humans share a lot of the same DNA with other animals. For example, we share almost half of our genes with fruit flies!

Genes that are especially important tend to look and work very similarly across species. Some transcription factors that affect a lot of genes, such as FOXP2, are often one of these “conserved” genes.

Evolutionary biologists took a look at FOXP2 and found that humans have two unique mutations that separate them from other apes. They estimated that the two changes happened at least a few hundred thousand years ago.

They also found that these changes probably weren’t just due to random chance — they were helping out the people who had them. In other words, these two changes were positively selected for.

When did Human Language Develop?

So did human language come about when humans acquired the two mutations in FOXP2? It’s hard to say. Here are three reasons why it might not be true.

Firstly, since FOXP2 is a transcription factor, it affects a lot of other genes. For example, FOXP2 affects CNTNAP2, which is also associated with language disorders. CNTNAP2 also looks different in apes.

Which gene finished getting the right changes first? Are both genes absolutely needed for language?

Secondly, we still don’t know all the genes that are responsible for language. For example, humans have a very low set voice box compared to other apes. Having a descended voice box give us more control over sounds we make, at the cost of us choking on food more often!

It sounds like an evolutionary trade-off in our past in favor of language. But we don’t know what genetic changes are responsible or when they happened.

So to recap, there are many changes in our bodies that prepared us for language. The genetic changes responsible probably happened one at a time. FOXP2 is responsible for a huge genetic chunk of why we have language, but it alone can’t explain it.

Pinpointing when we started using language might be impossible. Still, geneticists and anthropologists are making good progress on discovering how and why we have language.