Duchenne muscular dystrophy (DMD) runs in a friend's family. If their son inherited it, what are the chances that the son's children will have DMD?

-A curious adult from Kentucky

The chances his children will end up with Duchenne muscular dystrophy (DMD) depend on their mother.

If she isn’t a carrier for DMD, then it is unlikely their kids will have the disease. But because their dad has DMD, all of their daughters will be carriers (you’ll see why this is in the next sections).

On the other hand, if mom is a carrier, then each child will have a 50% chance for getting DMD. The daughters who don’t have DMD will be carriers but the DMD-free sons won’t be.

Luckily, being a carrier for DMD is pretty rare which means the first scenario, the one where none of the kids has DMD, is more likely. But as is usual for genetics, things aren’t always so simple.

It turns out that something like 5-10% of carriers have some symptoms of DMD. Almost never as severe as someone with the full blown disease but noticeable. So his daughters have a small chance of ending up with a mild version of DMD.

Even without symptoms, though, there is a drawback to being a carrier. His daughters could pass DMD down to their sons meaning his grandsons might have the disease.

For 22 of the pairs, the two copies are very close to the same. This is good because if one of our chromosomes has a problem, the other one can usually make up for it.

The exception to this is the 23rd pair in men. While females have two X chromosomes as their 23rd pair, males have an X and a Y.  This means if males have a problem on their X chromosome, then they don’t have a second X to make up for it.

As you might have guessed at this point, dystrophin, the gene that when broken can lead to DMD, is on the X chromosome. Let’s follow this gene and see what happens for different combinations of parents.

Here is an example of a man and a woman who only have dystrophin genes that work fine and so do not lead to DMD: 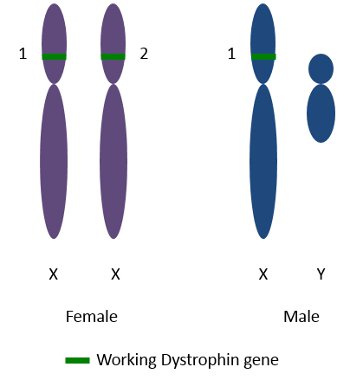 I have drawn the X’s as much bigger than the Y because that is how it is in real life (see the image to the right to see how big the Y actually is compared to the X). As you can see, the female has two purple X’s and the male has a blue X and a blue Y. I have colored them to make the chromosomes easier to follow.

I am showing the dystrophin gene as a little rectangle in the upper half of the X. If the gene doesn’t lead to DMD, I have colored it green and if it does, it is red.

As you can see, males have only one X and so only one copy of the dystrophin gene. If something goes wrong with the gene, then they don’t have a second one to back it up (there isn’t a dystrophin gene on the Y).

Now let’s see what this looks like with a female carrier and a male with DMD: 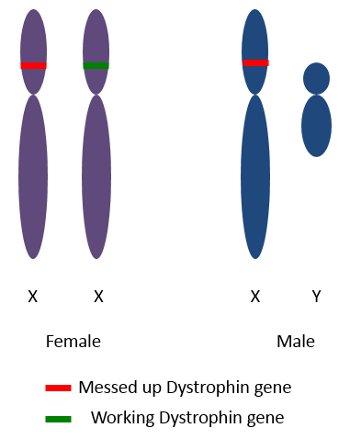 The male has only a red copy and so has DMD. It is a different story for the female.

She has a red and a green copy of the gene, which means she does not have full blown DMD—the green copy can compensate for the red one. But she is a carrier. And she might end up with a milder version of DMD even if she has only one problematic dystrophin (we will get to that later.)

Now, let’s explore a bit about why a man can’t pass DMD down to his kids on his own. Let’s imagine that Sam has DMD. Here is what Sam’s X and Y chromosomes look like (remember he has 22 other pairs too): 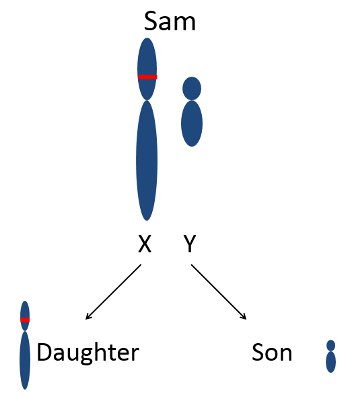 Since he passes his Y to his sons, none of them can get DMD from Sam. And since women usually need for both copies to have problems with the dystrophin gene, his daughters can’t get DMD just from him.

Now let’s say Sam marries a woman who isn’t a carrier. Let’s call her Jane. Here is what their kids will look like: 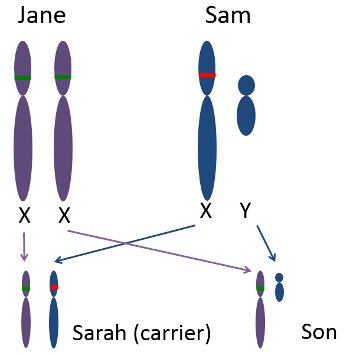 As before Sam will pass on his X chromosome with its problematic dystrophin to his daughter, let’s call her Sarah, and his Y to his son. Jane, the mom, will pass an X with a dystrophin gene that works perfectly fine to all of her sons and daughters.

Neither child has DMD (although Sarah might have some milder symptoms). If Jane and Sam had more children, the same would be true for them. The daughters would be carriers, and the sons would not have any problematic dystrophin genes.

This means the son won’t pass on DMD to his kids, but Sarah’s sons may not be so lucky. In other words, Sam’s grandsons through Sarah have a chance of ending up with his DMD.

Here is what might happen with Sarah’s sons (assuming dad does not have DMD): 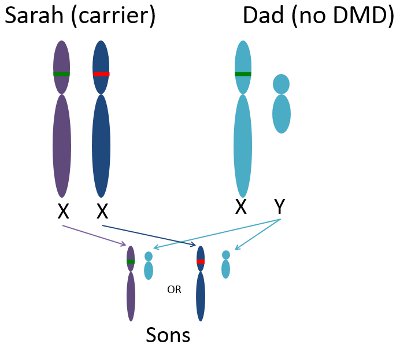 As you can see, if Sarah has sons, she has a 50% chance of passing on the X with the problematic dystrophin to her son. That is how the Sam’s grandson can have DMD but not Sam’s son.

I haven’t shown the daughters but the same logic applies. Each daughter has a 50% chance of being a carrier like Sarah.

Now what if Sarah marries a man with DMD? Here is what that will look like: 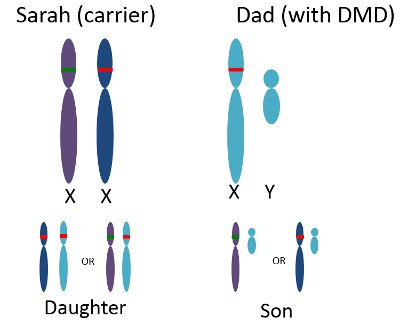 DMD is an example of an X-linked disease.  It is caused by the DNA on the X chromosome and affects mainly men.  Women are carriers and pass it on to their children.

Turning Off One X in Women

We said earlier that it was possible for a woman to have mild DMD symptoms. This is because even though she has two X’s, only one works in a cell. This is called X inactivation.

Luckily for women it isn’t always the same X off in each cell (click here for a more detailed description of this). Some cells have one X turned off and the rest have the other one off.

So then, it is possible that mainly the X chromosome with the good dystrophin copy is turned off.  Then you have a lot of cells in the female where the problematic dystrophin is active.  This can lead to some DMD symptoms.