Can a couple sire a baby that is significantly darker or lighter than either individual?

-A curious adult from North Carolina

The short answer is, yes! A couple can have a baby with a skin color that isn’t between their own. The long answer, though, is much more interesting.

The long answer has to do with the parts of your DNA that give specific instructions for one small part of you. In other words, your genes.

It turns out that there isn’t just one or even a few genes involved in skin color. There are hundreds of different stretches of DNA all working together that decide your skin color.

Some of these genes can have big effects while others fine-tune a final color. On top of all that, your actions can help change how your body reads your DNA! For example, staying out in the sun turns on genes that darken your skin.

Different Types of Genes Get Shuffled Around

Note the word mostly. If we all had the same DNA we’d all be identical twins!

These genes and alleles are kind of like a deck of cards. Each gene is like a different card (ace, two, three… jack, queen, king). And, like cards that come in different suits (spades, clubs, diamonds, hearts), there's more than one version of each card.

This mixed hand would give you medium toned skin.

If your partner has similar parents, then he or she will also end up with a mixed deck. Maybe something like this:

When you have a baby together, you and your partner will each give a random half of your cards to your baby. 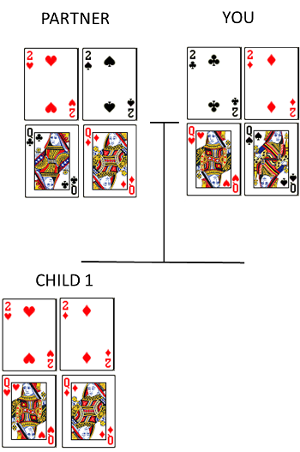 In this case, the baby would be much lighter than either of you.

The same logic applies to the black cards. If by chance your baby got mostly clubs and spades from you and your partner, then the baby would end up with much darker skin than either of you: 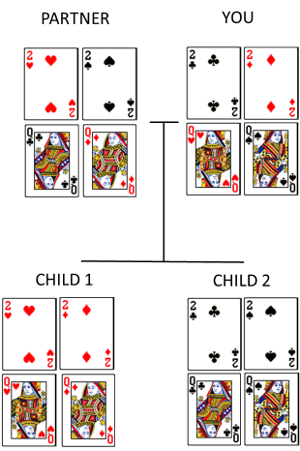 Some of these families answer your question: parents can have children with skin color that is significantly lighter or darker than their own.

Sometimes One Gene is Stronger than the Others

Sometimes a particular gene can have a much bigger effect than other genes. Scientists call this “different effect size.”

In the previous card example, we pretended that every card had the same value. Having a red queen had the same impact as a red two.

A more accurate game would be if each red number card had a different point value. A red queen would add a higher score than a red two. Some genes matter a lot and some just fine-tune the color.

To make the card game even more accurate, we can add one more rule: if you get two queens of hearts, you get an extra 1,000 points. Let’s see how that rule can impact things. 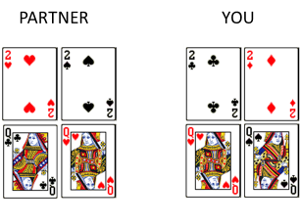 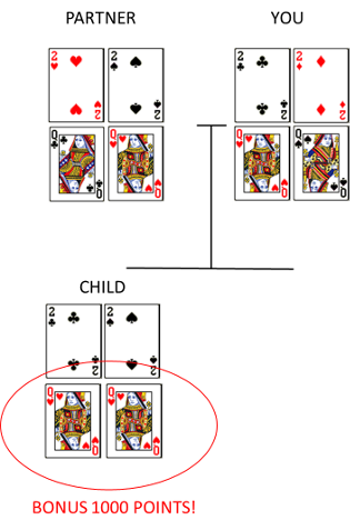 Here, even though the child has the same number of black and red cards as either parent, the child is much, much lighter than either parent because of those two queens of heart.

This may seem like a silly rule, but it’s actually how some genes work. In fact, it’s what happens for people with light skin and red hair.

There is a gene called MC1R that acts as an on switch for darker skin. Usually the sun is able to flick this switch and cause people to tan.

However, there is one type of this gene that doesn’t work. Like those two queens of hearts, if both of your copies of MC1R don’t work, you end up with way lighter skin. You score that 1,000 points!

When you need two copies of an allele to see a trait, this is called recessive. It takes two nonworking (recessive) MC1R alleles to give way lighter skin (the trait).

The rest of the person’s genes are saying, “make the hair colored!” so the person isn’t going to be blonde. But the person can’t flick the switch for brown, so their hair turns out red!

Genes Are Important, But You Still Have Control.

Your DNA contains all the information to make you. But that doesn’t mean it controls all of your future!

Genes, like MC1R, contain information about how a person will react to sun. Some people will burn while others will tan and still others will get covered in freckles. But each person can control how much he or she goes out into the sun.