Am I more genetically related to my grandson (my daughter's son) or to my nephew (my full sister's son)?

-A curious adult from the United Kingdom

That’s an interesting question! The quick answer is that you’re about 25% related to each of them. Notice the about…

For reasons I’ll talk about in a minute, there is some randomness in how related you will be to each of them. In fact, there can be a pretty wide range as shown in this chart from ISOGG Wiki: 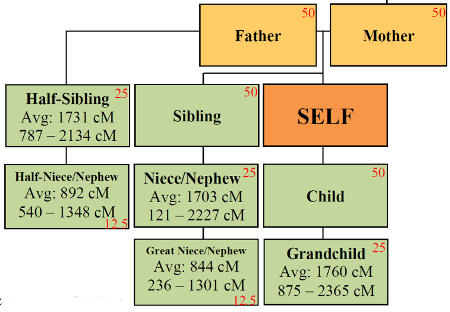 This chart is based on actual people's shared DNA. Unfortunately it can be a little confusing because they use something called centimorgans or cM instead of percent shared DNA. But it is easy to convert.

Two people share 25% of their DNA when they have around 1700 cM in common. As you can see, on average this is how much DNA you will share with a grandchild or with a niece/nephew. According to the chart, the average for a grandchild is 1760 cM and for a niece/nephew it is 1703 cM.

Let's now see why you can get such a range.

These kinds of questions are easier to answer if we draw out a family tree. Here is what your family tree (or pedigree) might look like:

The lower you are on the tree (or pedigree), the more generations came before you. Horizontal lines mean that two people had one or more children. Vertical lines show the relationship that gave rise to the child.

For example, I have drawn a horizontal line between your mom and dad with a vertical line coming down to your sister and you. And between you and your partner to give rise to your daughter. And so on.

Now let’s focus on the DNA that gets passed down from generation to generation. This is important because the amount of DNA we share with someone reflects how related we are to them.

You probably already know that kids get 50% of their DNA from their mom and 50% from their dad. So your daughter shares exactly 50% of your DNA.

If I draw your DNA as blue and your partner’s DNA as red, this is what her DNA might look like:

Notice she got half her DNA from you and half from your partner. She has one blue piece of DNA and one red one.

So going up and down the pedigree is pretty easy. You share exactly half of your DNA with your mom and your daughter. Your daughter’s son (your grandson) got 50% of his DNA from her.

If we add all of the DNA sharing to our earlier family tree, we get something like this:

I have drawn this from your perspective. So you are 100% related to you, 50% to each parent and your daughter.

Notice that for your grandson, I had to put the little ~ in front of the 25%.  Once you go past one generation, the exactly 50% gets lost for reasons I’ll talk about in the next section.  And it isn’t just the second generation where this happens.  It also happens in the horizontal parts of the family tree.

So if we continue to fill in your tree, we get something like this:

Notice all the abouts! To understand why we can’t get exact numbers in each situation, we need to take a step back and talk about chromosomes.  And a process they go through called recombination.

Our DNA is packaged into 23 pairs of chromosomes. So when we talk about getting 50% of our DNA from our parents, we actually mean we get one set of 23 from mom and one set of 23 from dad. The red and blue lines I drew before show one of these pairs.

Of course, your sister also got one set of chromosomes from your mom and one set from your dad. But she doesn’t necessarily get the same 50% of the DNA.

And it isn’t because she got one of the pairs and you got the other. Instead, through a process called recombination, you each ended up with mixed bits of both.

For this part of the discussion, we’ll just focus on 22 of the pairs. These are called autosomes or non-sex chromosomes. We’ll deal with the sex chromosomes (X and Y) at the end.

When you have kids, each chromosome in a pair swaps DNA with the other one in the pair. This shuffling is the recombination I talked about earlier.

So each autosome you got from your dad is not the same as either of his.  It is a mix of the two that gives you a brand new, never before seen chromosome.

Which parts of each chromosome that get swapped is totally random. So each child you have gets half of your DNA randomly too. But the actual 50% may be different.

OK, that was a bit confusing. This is where pictures can help. Imagine the following set of parents and their four kids:

On the top left, we have both of dad’s chromosomes. One is green and one is blue. On the top right, we see mom’s orange and red chromosomes. The kids are shown on the bottom row. It is important to note that this is just four of the infinite number of possible kids.

Notice how each child has a mix of mom’s and dad’s chromosomes. They each got some of all four chromosomes, they just got different bits.

You would be passing on more of your dad’s DNA than your mom’s for this chromosome in this example. And actually none of your mom’s red chromosome. So there is a bit of wiggle room in which of your parents’ chromosomes you pass on.

You are still passing on half of your own DNA, but by chance, less than half of your daughter’s DNA on this chromosome is shared with your mom. Since this sort of thing is spread out over 22 pairs of chromosomes, it all evens out so that your grandson gets about 25% of his DNA from your mom and 25% from your dad.

If you have another child the swapping will happen differently. That child may get more of your mom’s DNA on that chromosome and so on.

Your two kids will still be 50% related on average because there is more than a single pair of chromosomes. When this sort of thing is spread out over 23 pairs, it usually evens out quite a bit.

Moms have two X chromosomes and dads have an X and a Y. That means dads determine the sex of their child.

Moms only pass on an X. If a dad also passes an X chromosome on to a child, it’s a girl. If he passes a Y chromosome, it’s a boy.

The sex chromosomes, X and Y, can slightly affect how related various people are. This is because dads pass their X and Y virtually unchanged from generation to generation. In other words, the X and the Y don’t recombine before being put into the sperm.