I am trying to figure out why my son has brown eyes as both my husband and I have green. How can this happen?

As your case shows, it can definitely happen. And it is surprisingly common too.

But while we know it can and does happen, figuring out the how has proved to be tricky.

It turns out that eye color genetics is not simple. Not by a long shot.

For example, there are more than the two genes we base our eye color calculator on. And the brown version of one of the key genes isn’t always dominant over the not-brown version. More on the second point later.

Because of these two things, there are definitely genetic combinations where green-eyed parents can have a brown-eyed child. In fact, they are pretty easy to come up with.

Let’s dig in and see how.

OK so let’s start off with genes and how they work in eye color.

The set of genes involved in making eye color is, as I said earlier, a bit larger than two genes. In fact, a lot larger.

For example, one system called IrisPlex uses 6 genes to try to predict someone’s eye color. It turns out this system is pretty good at predicting blue and brown but still not great for green, hazel and so on. This almost certainly means there are still more genes to be found!

Here are the six genes used in IrisPlex:

The best understood of these genes is HERC2. Scientists have known about this one for a while and it forms the basis of lots of eye color predictors. It is the brown/not-brown gene we talk about a lot.

So far this doesn’t seem that complicated. Yes the names themselves are a bit off-putting but six seems manageable.

What makes this quickly get more complicated is that each of these genes comes in two different versions: 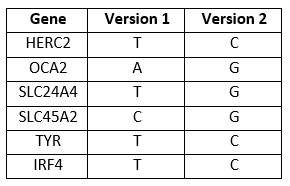 OK, getting tricky but still just manageable. We are only dealing with something like 64 different possibilities.

Except that we aren’t.

It turns out that like most of the rest of our genes, we have two copies of each of these eye color genes too. This means that each of us has three possibilities for each gene instead of just two.

This means, if I am doing my math correctly, there are 729 possible genetic combinations that determine your eye color. Which is way more complicated than the 9 possibilities of previous simple models.

Now let’s dive in and see if we can use this system to get a brown-eyed child from two green-eyed parents. Spoiler alert: we can. 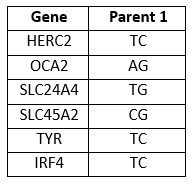 IrisPlex predicts that this person has a pretty good chance for green eyes (24.4%). Or as they put it, intermediate colored eyes which is pretty much everything except brown and blue.

Note that this parent has one of each version of every gene. Now let’s say parent 2 happens to have the same combination: 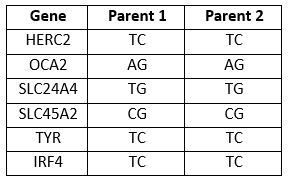 So we have two green-eyed parents with this particular set of gene versions.

When they have kids, they each pass only one version from each gene down to their kids. This means that for HERC2, each can pass either a T or a C. Their kids can end up TT, TC, or CC for HERC2.

This same process happens for all six genes. (And all 20,000 or so of the other genes too as a matter of fact.)

Let’s say it happened to shake out like this: 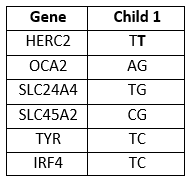 Note that the only difference is that the child happened to get a T from both parents for the HERC2 gene (I have bolded that T). This child is predicted to have brown eyes almost every time (95.5% chance)!

So in this case, these two green-eyed parents can have a brown-eyed child. Which of course the simpler model says is impossible.

Back to the Simple Model

In the simple model, two green-eyed parents could not have a brown-eyed child. It turns out that this is because in this model, everyone with one or two T’s for the HERC2 gene is predicted to have brown eyes.

Scientists would say that T version is dominant over the C version. TC people would always have brown eyes.

There is lots of DNA data to suggest that this is not the case. For example, the company 23andMe showed a few years back that lots of TC people do not have brown eyes. In fact, they even showed that around 15% of TT people did not have brown eyes! Here is a table using data from way back in 2009: 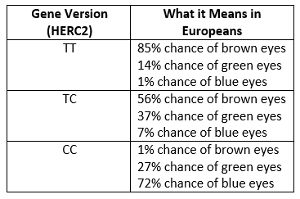 (The data for 23andMe has been tweaked to fit IrisPlex—the T in IrisPlex is the same as A in 23andMe.)

TT doesn’t always give brown eyes because those other 5 genes (as well as others) all affect eye color too. HERC2 is strong but not that strong!

I have included the next section for those people who even want to go a bit deeper.

Throughout this answer I talk about the C version or the T version of a gene. This refers to those famous A’s, G’s, C’s and T’s you may have heard about. Those DNA bases.

Basically our genes are written in a code that uses these four letters.

When I refer to a “T” or a “C” version of a gene, I mean that at a certain spot in the gene, there is either a T or a C. Here is a list of the spots in the genes that IrisPlex uses:

The last column in the place in the gene we are focused on. Scientists call these places SNPs—places in the DNA that are different between people.

If you have 23andMe or, to a lesser extent, ancestry.com data, you can search your raw data for these particular SNPs and try to punch the results into IrisPlex. Keep in mind that sometimes they will report an A when IrisPlex says a T. In these cases, remember that A always goes with T and G with C.

Did IrisPlex get your eye color right? It did mine...